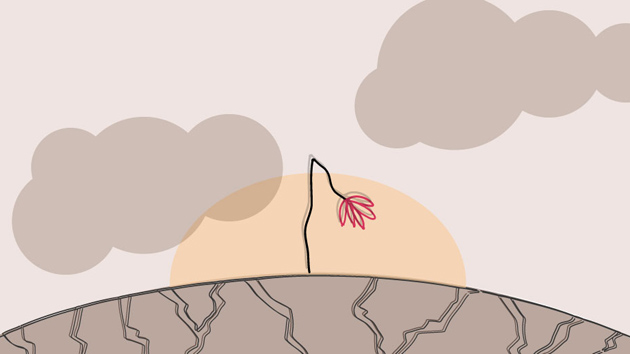 This story originally appeared in the Huffington Post and is reproduced here as part of the Climate Desk collaboration.

World leaders are meeting in Paris this month in what amounts to a last-ditch effort to avert the worst ravages of climate change. Climatologists now say that the best case scenario—assuming immediate and dramatic emissions curbs—is that planetary surface temperatures will increase by at least 2 degrees Celsius in the coming decades.

This may sound like a small uptick, but the implications are profound. Rising temperatures will destroy plant and animal habitats, and reduce yields of important food crops. More people will be exposed to the ravages of flooding and drought.

But if the nations involved in the Paris talks stay on their current emissions track and don’t reduce greenhouse gas emissions, temperatures could go up by almost 6 degrees Celsius this century, according to the Committee on Climate Change, an independent body that advises the UK government on climate issues.

The consequences of a heating globe are already being felt in Alaska, which is warming twice as fast as the rest of the US Rising temperatures have thawed frozen soil in some areas, leaving coastlines vulnerable to storms and tidal activity. Shishmaref, a remote village that sits on an island 30 miles outside the Arctic circle, is losing as many as 9 feet of land a year—chunks of coastline that simply break into the sea.

Each year, more species are losing their habitats to climate change. An increase of 4 degrees Celsius in average planetary temperatures could result in severe habitat loss for almost two-thirds of plant species and one-third of mammal species. (All charts by The Huffington Post.) 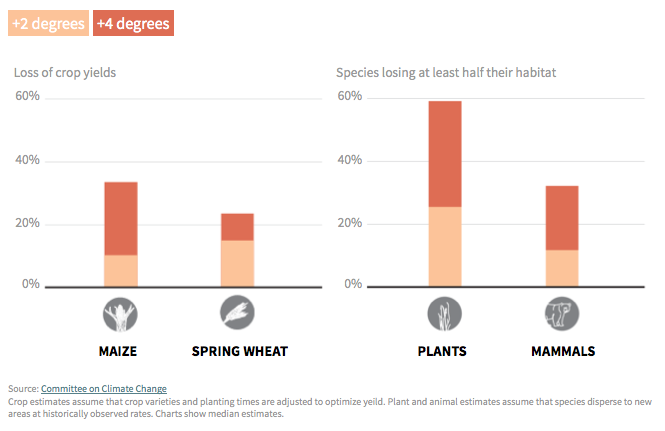 Even if nations meeting in Paris curtail carbon emissions, a growing number of communities will be exposed to threats caused by climate change. Vulnerable populations that live near water or in arid places will face massive disruptions to their way of life: Flooding and severe drought are on course to become much more common. 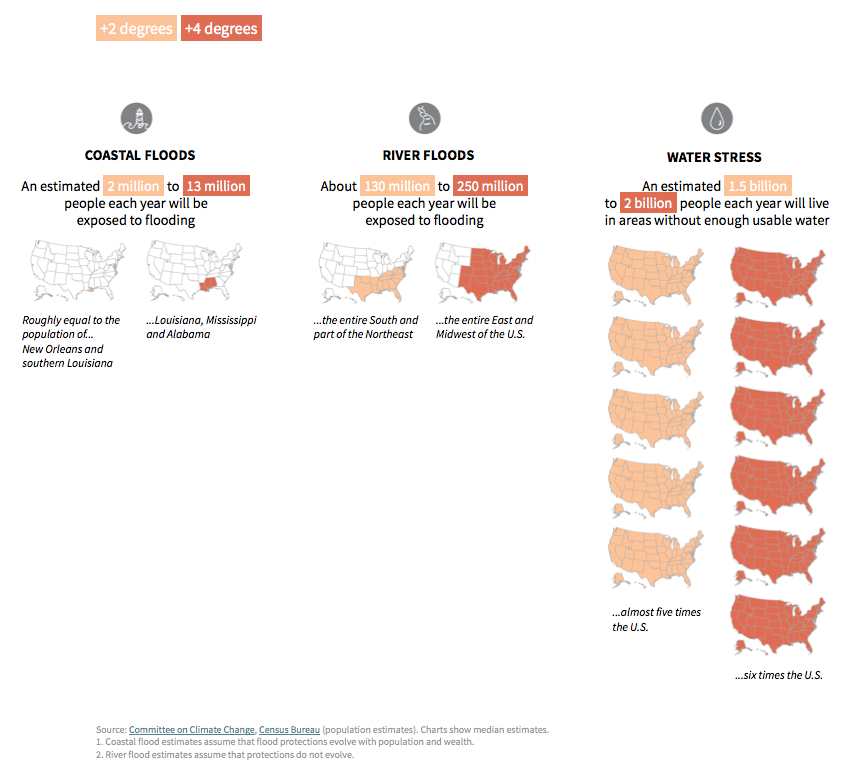 Human activity since industrialization has led to a huge increase in the production of carbon dioxide, a greenhouse gas that contributes to rising global temperatures. Scientists warn that if carbon dioxide and other greenhouse gas emissions continue to rise at their current rates, Earth’s temperatures could increase dramatically in future decades, leading to catastrophic and irreversible climate change.

The 10 largest emitters produced about 26.4 gigatons of carbon dioxide in 2013. (A gigaton is 1 billion tons, or roughly the equivalent of the annual emissions from every passenger car in the US each year.) They are highlighted in red. 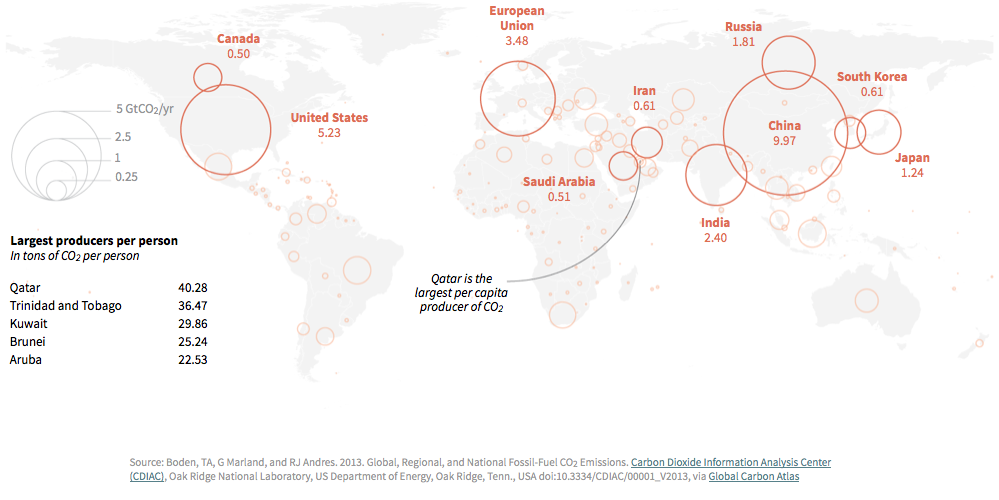 Countries Producing Most Of The World’s Carbon Promise Big Cuts

Countries responsible for two-thirds of global emissions have made commitments to curb their greenhouse gas production. That group includes some of the biggest emitters like China, India and the US.

China, the world’s biggest carbon producer, has promised that its carbon emissions will peak by 2030. 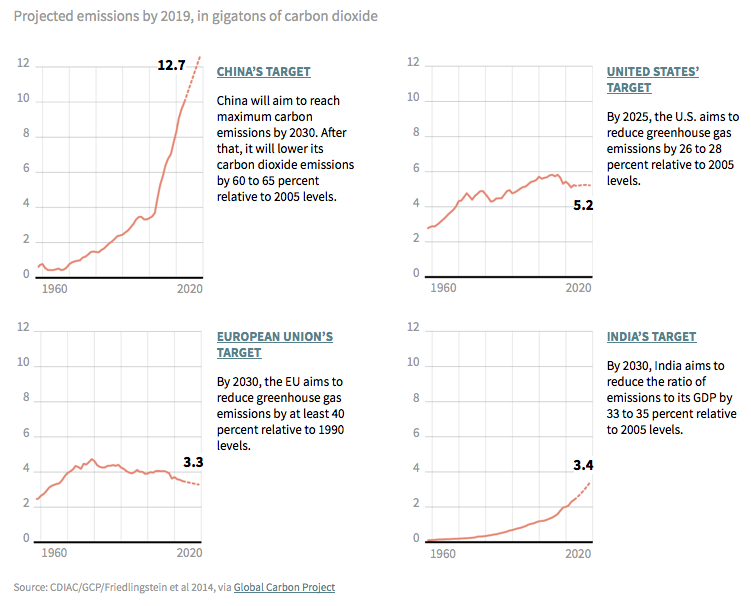 The green, orange and yellow lines indicate how surface temperatures will likely respond if leading carbon emitters begin to reduce reliance on fossil fuels. Without immediate curbs, temperatures are set to follow the red track, and increase between 3.2 and 5.4 degrees Celsius by 2100. The green line shows how we can minimize warming if emissions immediately drop—a highly unlikely scenario. 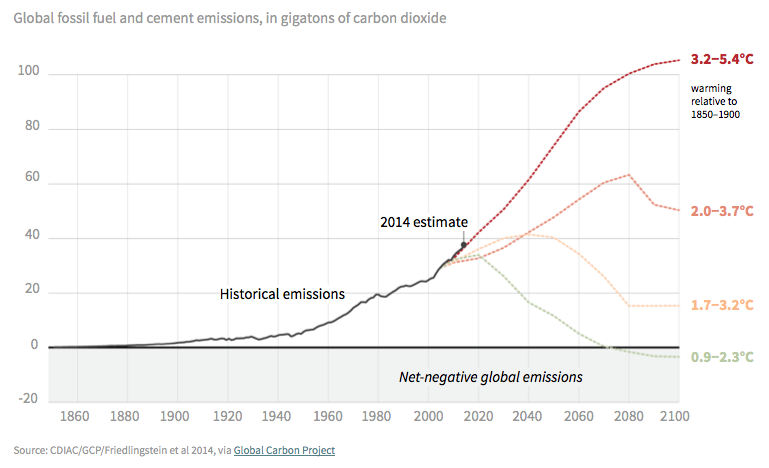