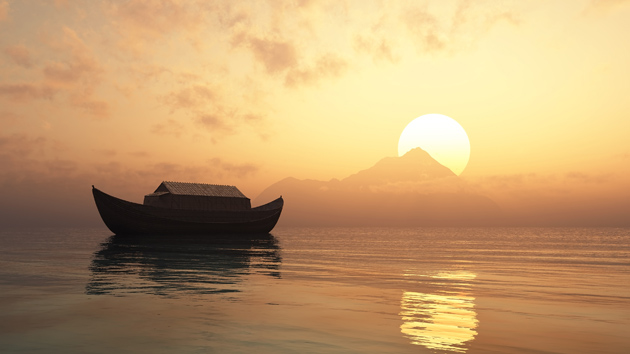 When it comes to confronting global climate change, we don’t have much experience to draw on. As world leaders prepare to meet in Paris starting on November 30 to hash out a binding international agreement to limit greenhouse gases, it appears that we are in new and frightening territory, without the past as a reliable guide.

History, however, can offer some important lessons. Archaeologists in recent years have discovered that dramatic weather events helped lay the foundations for our very civilization. Climate calamities, in fact, may have sparked the urban revolution that continues to alter the planet.

Natural disasters come in many deadly forms. The 2004 Indian Ocean earthquake and tsunami, for example, killed more people in two hours than Syria’s gruesome civil war has killed in the past four years.

But storms and floods are, hands down, humanity’s single greatest natural enemy. The deadliest natural disaster in U.S. history was the 1900 hurricane that hit Galveston, Texas, drowning as many as 12,000 people. In 1931, up to 3.7 million died after China’s Yangtze River burst from its banks, a figure exceeding total military casualties in that country during all of World War II.

No wonder that the biblical story of Noah remains our touchstone for disaster.

Jennifer Pournelle, an archaeologist at the University of South Carolina, knows too well the power of floods. Last month, her roof gave under the relentless pounding of 24 inches of rain in 24 hours, and the sheep in her pasture fled into the woods. “They’ll return this winter when they get hungry,” she says.

No wonder that the Biblical story of Noah remains our touchstone for disaster.

Pournelle spends a good deal of time in southern Iraq, what the ancient Greeks called Mesopotamia. That’s where the flood myth recounted in the epic Gilgamesh and later adapted by biblical writers originated. By analyzing satellite images, carefully charting the area’s geomorphology, and drilling cores into the mud with colleagues from the University of Basra, she found that changes in climate preceded the appearance of the world’s first cities.

Six thousand years ago, people across the Middle East grew crops and kept animals, but they hadn’t yet invented urban life. Sea levels were on the rise, and the Persian Gulf rapidly encroached on Mesopotamia. This is one of the world’s flattest places. Like a broad beach in an oncoming tide, the land was quickly swallowed up by water.

Those living in the marshes and low-lying hamlets sought refuge on a few narrow ridges just high enough to protect them from inundation.

Suddenly, people had to find a way to cooperate on these small but thickly populated islands of dry earth. They adapted by reorganizing their society.

They experimented with innovative ways to store food. They crowned kings, invented a priestly class to mediate between humans and the gods, and divided up tasks like making pottery, keeping financial accounts, and soldiering. They built temples and public buildings on a scale never seen before. By 3200 B.C., scribes made the first written records. Almost everything else in all of human civilization is a variation on a theme first played in Mesopotamia.

The ideas of cities, writing, big temples and palaces, and kings and a priestly class spread quickly across Asia and Africa and eventually into Europe. In some cases, such as in Egypt, these traits all appear nearly simultaneously.

Something similar likely took place in the New World, where the first monumental buildings and cities sprang up along the Pacific coast of Peru 3,000 years ago, not long after the modern El Niño weather pattern began. The onset of that periodic phenomenon—the same weather pattern that is due to deliver floods and mudslides this winter from Chile to California—may have prompted ancient Peruvians to join together in a novel way to deal with the recurring destruction. 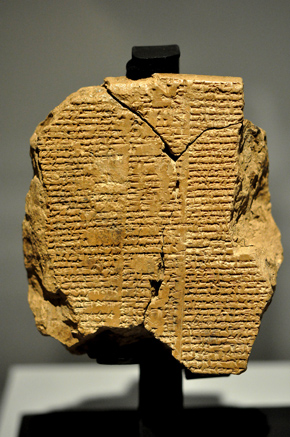 A newly discovered, partially broken tablet V of the Epic of Gilgamesh. The tablet dates back to the old Babylonian period, 2003-1595 BCE. From Mesopotamia, Iraq. The Sulaymaniyah Museum, Iraq. Courtesy of Osama Shukir Muhammed Amin/Creative Commons

Historians and archaeologists no longer see civilization as a forced evolutionary march from farming to factory to Facebook. Instead, they see individuals and groups grasping for creative ways to overcome immediate perils. The results, as in Mesopotamia, can transform not only their society, but those around them and those that come after. Stress and strain make us stretch.

Humans, of course, don’t always triumph. Terrible droughts 4,000 years ago may have played a central role in the dramatic collapse of the first Mesopotamian cities, along with Egypt’s Old Kingdom and the Indus civilization in what is now Pakistan and India. The changes were too deep or fast or tenacious for societies to cope. Warfare, famine, and disease stalked the Near East for centuries.

If history is our guide, then, an effective response to today’s changing climate—which is shifting more rapidly than at any time since Homo sapiens evolved—requires a major retooling of our economy, institutions, infrastructure, and even our beliefs.

The scope of such transformation is so daunting that the climate debate seems mired either in head-in-the-sand denial or a call-in-hospice fatalism. Jonathan Franzen wrote recently in the New Yorker that “the Earth as we now know it resembles a patient whose terminal cancer we can choose to treat either with disfiguring aggression or with palliation and sympathy.”

It is true that the challenges dwarf those faced by the scattered bands of ancient Iraqis. Large parts of the heavily populated Nile Delta and much of the lowlands of Bangladesh, where some of the world’s most vulnerable people live, may slip under the waves in coming decades. Tens of millions of people could soon be in danger.

Southern Iraq may again face inundation, only this time there is not enough high ground for the growing population in the region. And then there are the storms and droughts and shifting weather patterns that threaten to impact everyone everywhere, from the Arctic to the Amazon.

All the while, we continue to build more coal-fired power plants, drive more cars, fly more planes, and consume more electricity as more of us gain access to an energy-intensive life once reserved for the privileged few. Whatever happens in Paris, our species has raised the stakes by providing nature with ever-greater opportunities to smash our increasingly urban world.

There’s no guarantee of a rainbow in the aftermath.

Yet our civilization is not a doomed Atlantis. Satellites, ocean buoys, and terrestrial weather stations give us the real-time pulse of the planet that the ancients lacked. Our ability to respond to emergencies has grown by leaps and bounds. We can prepare for and evacuate from hurricanes, in stark contrast to the horror at Galveston. And we can choose the greater good over narrow interests, as politicians did in 1985 when they banned chemicals that harm the ozone layer.

Unless we burn enough carbon to turn the Earth into a hellish Venus, we have a good shot not only at preventing global catastrophe but at reshaping our world in ways that tackle not just rising seas but increasing inequality, intolerance, and injustice—some of the institutionalized social ills that stem from the invention of the city itself.

There is no natural law that says we can’t come up with new approaches to address those issues in more humane ways. The threat of global climate change may be just the kick in the pants that we need. “In every crisis there is a message,” says Susan L. Taylor, editor-in-chief emerita of Essence magazine “Crises are nature’s way of forcing change—breaking down old structures, shaking loose negative habits so that something new and better can take their place.”

There’s no guarantee of a rainbow in the aftermath. Our humanity will be sorely tested as the most vulnerable suffer while those with resources grab the higher ground. But our ancestors’ accomplishments, laid bare by archaeologists in the nick of time, can inspire us to change the world rather than just its climate.