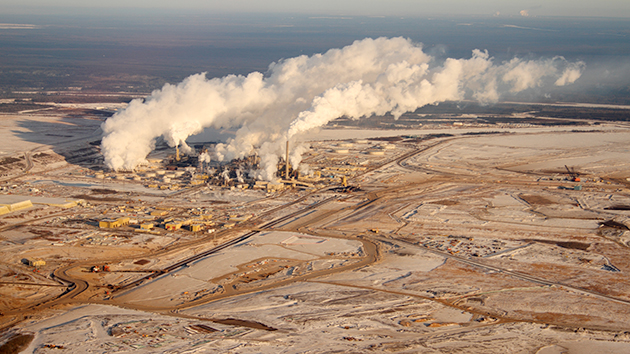 On Monday evening, TransCanada, the company behind the proposed Keystone XL oil pipeline, asked the State Department to put its permit application on ice.

The rationale, according to the letter TransCanada sent Secretary of State John Kerry, is to await a decision by regulators in Nebraska about a possible change to the pipeline’s route. But since that decision isn’t expected for seven to twelve months, a delay would likely punt the final decision to whoever takes over the White House after President Barack Obama.

Bernie Sanders, Hillary Clinton, and Martin O’Malley have said they would reject the pipeline application; all the GOP candidates have expressed support for it.

Environmental groups were quick to claim the development as a victory, a sure sign that TransCanada knows its project doesn’t stand a chance under the Obama administration (which has to approve the construction permit, since it crosses an international border), and is reverting to desperate tactics.

“Clearly TransCanada has lost and they recognize that,” Bill McKibben, founder of activist group 350.org, said in a statement. “It’s one of the great victories for this movement in decades.”

But the $8 billion pipeline, which would enable crude oil from Canada’s oil sands to reach refineries and ports in the United States, isn’t dead yet. The next step will be for the State Department to decide whether or not to grant TransCanada the delay it is seeking. The Department is “reviewing” the letter while it continues to weigh a final decision, a spokesperson said today. If it does choose to delay, the final outcome will essentially boil down to whether a Republican or a Democrat wins the 2016 presidential election. Bernie Sanders, Hillary Clinton, and Martin O’Malley have said they would reject the pipeline application; all the GOP candidates have expressed support for it.

The other option, advocated by McKibben and his peers, is that State reject the requested delay and forge ahead to reject the permit. That would send a clear signal to other countries that Obama is serious about climate action ahead of upcoming international negotiations in Paris. It would also test the relationship of Obama with soon-to-be Canadian Prime Minister Justin Trudeau, who has promised to take more serious action on climate than his predecessor Stephen Harper, but who last month visited Washington, D.C. to advocate for the pipeline.

Whether that rejection would really benefit the climate is less clear. The oil sands oil destined for Keystone XL—some of the most carbon-intense fossil fuels on Earth—needs to stay buried in order to avert the worst impacts of climate change, according to a growing body of science. Would a rejection from Obama keep in the ground? Not necessarily: TransCanada would have the option to re-apply for the permit starting from scratch under the next administration.

Without sufficient pipelines in place, the low oil price is already squeezing oil sands production and forcing companies out of the game.

Meanwhile, with global oil prices persisting at the very low level of around $50 per barrel, oil sands developers are eager for more pipelines, since exporting oil by pipe is much less expensive than doing so by truck or train. An analysis this year from the Environmental Protection Agency noted that as long as oil prices remain under about $75 a barrel, building the pipeline would lead to “increased oil sands production, and the accompanying greenhouse gas emissions, over what would otherwise occur.”

Even if oil prices dip further, the pipeline could still look attractive to oil producers, so they can be prepared to pounce when the market turns back in their favor, said Anthony Swift, an international affairs attorney with the Natural Resources Defense Council.

“For risk-averse companies, in many ways knowing that cheap transportation is available is more important than a sense of where oil prices are today,” he said.

Still, a rejection from Obama would be a considerable setback. Reapplying, which would require starting the State Department’s complex formal environmental review process from scratch, could still be long and costly even under a Republican president. And TransCanada would be racing against the clock: Without sufficient pipelines in place, the low oil price is already squeezing oil sands production and forcing companies out of the game. Just last week, Shell announced it will abandon a $2 billion investment in a oil sands project in Alberta, citing concerns about how it would move the oil to market.

Meanwhile, opposition to the project by environmental groups isn’t getting any weaker.

“TransCanada would be reapplying in a very different climate” than when it first proposed the pipeline in 2008, Swift said. “On both sides of the border there’s a new awareness of the environmental impacts of tar sands development.”