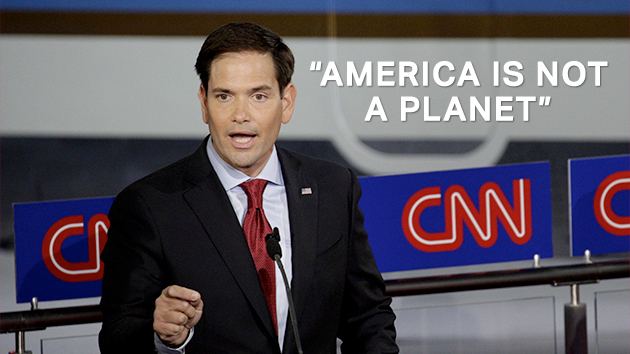 Climate change made a last-minute appearance in Wednesday night’s GOP debate on CNN. Nearly 150 minutes into the show, and only for about four minutes, a few candidates weighed in on President Barack Obama’s plan to tackle global warming.

What made the short exchange most notable was the fact that none of the candidates on stage spent time refuting the fundamental science behind climate change: that the world is warming, and that humans are responsible. This alone was a sign of a recent shift in conservative politics that some pollsters have identified: More than 70 percent of Republicans believe humans are contributing to global warming, according to one recent study. Many conservatives no longer reject climate science itself. Rather, they reject the solutions, which they view as economically onerous. So, predictably, the GOP candidates largely portrayed Obama’s landmark Clean Power Plan as job-killing overregulation.

New Jersey Gov. Chris Christie agreed. “We shouldn’t be destroying our economy in order to chase some wild, left-wing idea that somehow, us, by ourselves, are going to fix the climate,” he said, while touting his state’s solar investments.

Let’s fact-check a few of the statements from the debate.

Marco Rubio: “America is not a planet. And we are not even the largest carbon producer anymore: China is. And they’re drilling a hole and digging anywhere in the world that they can get a hold of.”

It’s true that America is not a planet. So we’re off to a good start. There is a sprawling (round) and diverse world beyond America’s shores that features other countries and other leaders and other cultures. These 197 countries include, but are not limited to, Afghanistan, Albania, Algeria…Anyway, the list goes on. The point Rubio is making, though, is that America can’t act alone to solve climate change.

That’s true. That’s why the UN climate process exists—to try to get countries to make a deal to reduce carbon pollution around the world. Rubio is right: China is the largest carbon producer in the world, by far, and is therefore crucial to how the world deals with runaway global warming. China’s reluctance at the Copenhagen negotiations in 2009 to forge a deal was reportedly central to the summit failing. China, as we’ve reported before, is voraciously consuming energy, and Rubio is correct that the country is “drilling a hole and digging anywhere.”

But that doesn’t mean China isn’t moving hard and fast on climate action. Indeed, China is acting, for the first time, in concert with the United States. Last November, China set a year at which it expects its emissions to “peak,” or finally begin to taper downward: around 2030. Credible analysts say that could happen sooner, holding out a tantalizing possibility: The world could stay within the internationally agreed-upon limit of 2 degrees Celsius (3.6 degrees Fahrenheit) of warming above pre-industrial levels. China is also pouring money into renewable energy, especially solar. And in September 2014, China announced it was moving forward with plans for a massive, nationwide cap-and-trade program intended to help combat climate change. The program will launch in 2016, but there are already a series of pilot carbon markets across the country.

So, Sen. Rubio: China is acting, and the United States is helping it act. Just this week, a delegation of Chinese climate negotiators met their American counterparts in Los Angeles to announce a widespread crackdown on carbon emissions in Chinese cities—matched by commitments from US cities.

Rubio: “The decisions that the left want us to make…will make America a more expensive place to create jobs.”

Wisconsin Gov. Scott Walker: “This is an issue where, we’re talking about my state, it’s thousands of manufacturing jobs.”

Christie: “We shouldn’t be destroying our economy in order to chase some wild, left-wing idea that somehow, us, by ourselves, are going to fix the climate.”

Rubio, Walker, and Christie are referring to a classic argument here, that increased regulation will make electricity bills more expensive, depress the economy, and kill jobs. The truth is a little more complicated—and this is where it gets a little wonky. The entire electricity industry is changing, with or without Obama’s new climate rules. As my colleague Tim McDonnell reported in February, inefficient coal plants that could face closure under Obama’s EPA-led Clean Power Plan “are already being threatened by competition from cheap natural gas and existing EPA rules targeting mercury pollution”:

A recent survey of the nation’s electric utility companies found that 77 percent already plan to reduce their dependence on coal in the coming years, while a similar proportion plan to increase their dependence on natural gas and renewables. In other words, the new EPA rules don’t signal an about-face from existing trends.

The point is that making lots of energy from coal plants just isn’t as economically feasible as it once was—so it’s hard to blame any one lost coal industry job on the EPA’s plan alone. And about electricity bills themselves, McDonnell writes about one case study suggesting electric bills could actually go down:

Meanwhile, back in Virginia, an analysis by the Southern Environmental Law Center found that although electricity rates are projected to rise 2 percent by 2030, improvements in energy efficiency thanks to the new EPA rules would actually lead to an 8 percent drop in consumers’ electric bills.

According to the Natural Resources Defense Council, savings like that could add up to $37.4 billion for all US homes and businesses by 2020.

But it’s probably taken you longer to read this than the exchange took to play out on stage at the Reagan Library in California. And once they were done misinforming viewers about the climate, they moved on to vaccines.