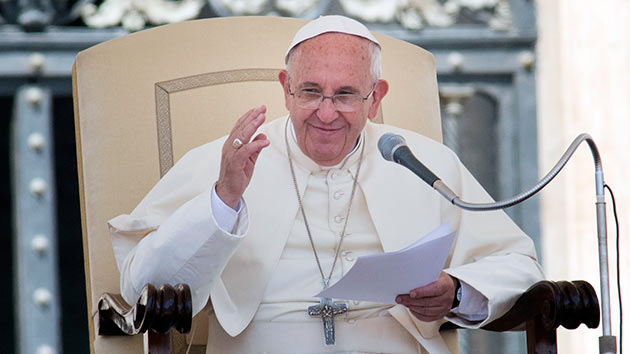 This is an excerpt from Pope Francis’ encyclical on the environment, Laudato Si. This article was originally published by the Guardian and is republished here as part of the Climate Desk collaboration.

The Earth, our home, is beginning to look more and more like an immense pile of filth. In many parts of the planet, the elderly lament that once beautiful landscapes are now covered with rubbish. Industrial waste and chemical products utilized in cities and agricultural areas can lead to bio-accumulation in the organisms of the local population, even when levels of toxins in those places are low. Frequently no measures are taken until after people’s health has been irreversibly affected.

These problems are closely linked to a throwaway culture which affects the excluded just as it quickly reduces things to rubbish. To cite one example, most of the paper we produce is thrown away and not recycled. It is hard for us to accept that the way natural ecosystems work is exemplary: plants synthesize nutrients which feed herbivores; these in turn become food for carnivores, which produce significant quantities of organic waste which give rise to new generations of plants. But our industrial system, at the end of its cycle of production and consumption, has not developed the capacity to absorb and reuse waste and by-products. We have not yet managed to adopt a circular model of production capable of preserving resources for present and future generations, while limiting as much as possible the use of non-renewable resources, moderating their consumption, maximizing their efficient use, reusing and recycling them. A serious consideration of this issue would be one way of counteracting the throwaway culture which affects the entire planet, but it must be said that only limited progress has been made in this regard.

A very solid scientific consensus indicates that we are presently witnessing a disturbing warming of the climatic system.

The climate is a common good, belonging to all and meant for all. At the global level, it is a complex system linked to many of the essential conditions for human life. A very solid scientific consensus indicates that we are presently witnessing a disturbing warming of the climatic system. In recent decades this warming has been accompanied by a constant rise in the sea level and, it would appear, by an increase of extreme weather events, even if a scientifically determinable cause cannot be assigned to each particular phenomenon. Humanity is called to recognize the need for changes of lifestyle, production and consumption, in order to combat this warming or at least the human causes which produce or aggravate it. It is true that there are other factors (such as volcanic activity, variations in the Earth’s orbit and axis, the solar cycle), yet a number of scientific studies indicate that most global warming in recent decades is due to the great concentration of greenhouse gases (carbon dioxide, methane, nitrogen oxides and others) released mainly as a result of human activity. Concentrated in the atmosphere, these gases do not allow the warmth of the sun’s rays reflected by the Earth to be dispersed in space. The problem is aggravated by a model of development based on the intensive use of fossil fuels, which is at the heart of the worldwide energy system. Another determining factor has been an increase in changed uses of the soil, principally deforestation for agricultural purposes.

Many of those who possess more resources and economic or political power seem mostly to be concerned with masking the problems or concealing their symptoms, simply making efforts to reduce some of the negative impacts of climate change. However, many of these symptoms indicate that such effects will continue to worsen if we continue with current models of production and consumption. There is an urgent need to develop policies so that, in the next few years, the emission of carbon dioxide and other highly polluting gases can be drastically reduced, for example, substituting for fossil fuels and developing sources of renewable energy. Worldwide there is minimal access to clean and renewable energy. There is still a need to develop adequate storage technologies. Some countries have made considerable progress, although it is far from constituting a significant proportion. Investments have also been made in means of production and transportation which consume less energy and require fewer raw materials, as well as in methods of construction and renovating buildings which improve their energy efficiency. But these good practices are still far from widespread.

The human environment and the natural environment deteriorate together; we cannot adequately combat environmental degradation unless we attend to causes related to human and social degradation. In fact, the deterioration of the environment and of society affects the most vulnerable people on the planet: both everyday experience and scientific research show that the gravest effects of all attacks on the environment are suffered by the poorest. For example, the depletion of fishing reserves especially hurts small fishing communities without the means to replace those resources; water pollution particularly affects the poor who cannot buy bottled water; and rises in the sea level mainly affect impoverished coastal populations who have nowhere else to go. The impact of present imbalances is also seen in the premature death of many of the poor, in conflicts sparked by the shortage of resources, and in any number of other problems which are insufficiently represented on global agendas. It needs to be said that, generally speaking, there is little in the way of clear awareness of problems which especially affect the excluded. Yet they are the majority of the planet’s population, billions of people.

Rises in the sea level mainly affect impoverished coastal populations who have nowhere else to go.

These days, they are mentioned in international political and economic discussions, but one often has the impression that their problems are brought up as an afterthought, a question which gets added almost out of duty or in a tangential way, if not treated merely as collateral damage. Indeed, when all is said and done, they frequently remain at the bottom of the pile. This is due partly to the fact that many professionals, opinion makers, communications media and centers of power, being located in affluent urban areas, are far removed from the poor, with little direct contact with their problems. They live and reason from the comfortable position of a high level of development and a quality of life well beyond the reach of the majority of the world’s population. This lack of physical contact and encounter, encouraged at times by the disintegration of our cities, can lead to a numbing of conscience and to tendentious analyses which neglect parts of reality. At times this attitude exists side by side with a “green” rhetoric. Today, however, we have to realize that a true ecological approach always becomes a social approach; it must integrate questions of justice in debates on the environment, so as to hear both the cry of the Earth and the cry of the poor.

The same mindset which stands in the way of making radical decisions to reverse the trend of global warming also stands in the way of achieving the goal of eliminating poverty. A more responsible overall approach is needed to deal with both problems: the reduction of pollution and the development of poorer countries and regions. The twenty-first century, while maintaining systems of governance inherited from the past, is witnessing a weakening of the power of nation states, chiefly because the economic and financial sectors, being transnational, tends to prevail over the political. Given this situation, it is essential to devise stronger and more efficiently organized international institutions, with functionaries who are appointed fairly by agreement among national governments, and empowered to impose sanctions. As Benedict XVI has affirmed in continuity with the social teaching of the Church: “To manage the global economy; to revive economies hit by the crisis; to avoid any deterioration of the present crisis and the greater imbalances that would result; to bring about integral and timely disarmament, food security and peace; to guarantee the protection of the environment and to regulate migration: for all this, there is urgent need of a true world political authority, as my predecessor Blessed John XXIII indicated some years ago.” Diplomacy also takes on new importance in the work of developing international strategies which can anticipate serious problems affecting us all.

Since the market tends to promote extreme consumerism in an effort to sell its products, people can easily get caught up in a whirlwind of needless buying and spending. Compulsive consumerism is one example of how the techno-economic paradigm affects individuals. Romano Guardini had already foreseen this: “The gadgets and technics forced upon him by the patterns of machine production and of abstract planning mass man accepts quite simply; they are the forms of life itself. To either a greater or lesser degree mass man is convinced that his conformity is both reasonable and just.” This paradigm leads people to believe that they are free as long as they have the supposed freedom to consume. But those really free are the minority who wield economic and financial power. Amid this confusion, postmodern humanity has not yet achieved a new self-awareness capable of offering guidance and direction, and this lack of identity is a source of anxiety. We have too many means and only a few insubstantial ends. The current global situation engenders a feeling of instability and uncertainty, which in turn becomes “a seedbed for collective selfishness.” When people become self-centered and self-enclosed, their greed increases. The emptier a person’s heart is, the more he or she needs things to buy, own and consume. It becomes almost impossible to accept the limits imposed by reality. In this horizon, a genuine sense of the common good also disappears. As these attitudes become more widespread, social norms are respected only to the extent that they do not clash with personal needs. So our concern cannot be limited merely to the threat of extreme weather events, but must also extend to the catastrophic consequences of social unrest. Obsession with a consumerist lifestyle, above all when few people are capable of maintaining it, can only lead to violence and mutual destruction.

Yet all is not lost. Human beings, while capable of the worst, are also capable of rising above themselves, choosing again what is good, and making a new start, despite their mental and social conditioning. We are able to take an honest look at ourselves, to acknowledge our deep dissatisfaction, and to embark on new paths to authentic freedom. No system can completely suppress our openness to what is good, true and beautiful, or our God-given ability to respond to his grace at work deep in our hearts. I appeal to everyone throughout the world not to forget this dignity which is ours. No one has the right to take it from us.

Pope Francis’ encyclical is published in full by the Vatican here.