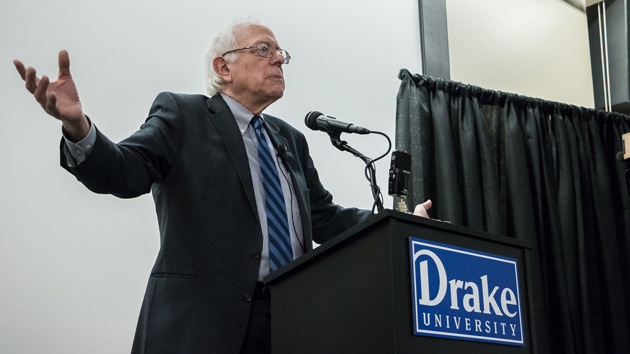 This article originally appeared in Grist and is republished here as part of the Climate Desk collaboration.

The Democratic presidential primary race got its second major candidate recently, and its first true climate hawk: Sen. Bernie Sanders of Vermont, self-described democratic socialist. Sanders has one of the strongest climate change records in the Senate. In fact, according to rankings released by Climate Hawks Vote, a new super PAC, Sanders was the No. 1 climate leader in the Senate for the 113th Congress that ended in January.

Climate Hawks Vote measures leadership, not just voting records, tabulating actions like bills introduced, speeches given, and so forth. In the 112th Congress, Sanders ranked third behind Sen. Sheldon Whitehouse (D-R.I.) and Jeff Merkley (D-Ore.). In the last Congress, he edged out Whitehouse by one point.

“Sanders is very much among the top leaders,” says R.L. Miller, founder of Climate Hawks Vote. “He has a record of really strong advocacy for solar in particular.” Miller notes that distributed solar, which enables everyone with a solar panel to create their own energy instead of relying on a monopolistic utility company, fits especially well with Sanders’ democratic socialist philosophy. It’s bad for corporations and good for regular folks who get to own the means of production.

Here are some of the highlights from Sanders’ climate and clean energy record:

So we know Sanders is dedicated to climate action and clean energy. Looking forward, though, it’s unclear how Sanders will differentiate his climate and energy proposals from Clinton’s. Clinton, like President Obama, firmly supports regulating carbon emissions domestically and getting strong international agreements to reduce emissions globally. While it is certainly true that Sanders has made more of an issue of his support for the same, it is not necessarily an issue on which Clinton needs to be pushed leftward. Many climate hawks love the fee-and-dividend approach that Sanders supports, but the truth is that no big climate-pricing bill will pass in the next few years, no matter who’s president, because the Republicans will continue to control the House. And Clinton already supports the kind of strong executive action that Obama is taking to curb CO2 emissions from power plants.

“On climate stuff [Sanders has] been the most aggressive voice in the Senate,” says Bill McKibben.

One way Sanders could set himself apart as the greenest candidate would be to propose clamping down on domestic fossil fuel extraction, especially on federal lands and waters—something a president could move on without congressional approval. Sanders has not spoken up about the extraction issue in general, but he could call for a moratorium on fossil fuel leasing offshore or on federal land. That would please climate activists, who are already expressing concern that Clinton isn’t committed to keeping dirty fuel sources in the ground. “What we really need,” says Miller, “is someone to advocate for closing down the Powder River Basin”—an area in Montana and Wyoming that’s a huge source of coal mined from federal land—”but no one is really willing to come out and say that, so instead they come out for higher prices on coal leases. Sanders has not.”

In an interview with the Washington Post‘s Greg Sargent, Sanders called for a progressive climate agenda that includes a carbon tax and investments in renewables, energy efficiency, and alternative transportation—but he made no mention of restricting fossil fuel development. Here is what he offered:

A tax on carbon; a massive investment in solar, wind, geothermal; it would be making sure that every home and building in this country is properly winterized; it would be putting substantial money into rail, both passenger and cargo, so we can move towards breaking our dependency on automobiles. And it would be leading other countries around the world.

Bill McKibben, who founded 350.org and has led the fight to stop the Keystone XL pipeline, says he is confident Sanders understands the need to keep fossil fuels in the ground. Sanders has opposed Keystone, while Clinton has avoided taking a position on it. “He’s been the most consistent and proactive voice in the entire Keystone fight,” writes McKibben in an email. “Everything that’s been needed—from speeches on the floor to legislation to demands that the State Department change its absurd review process—he and his staff have done immediately and with a high degree of professionalism…On climate stuff he’s been the most aggressive voice in the Senate, rivaled only by Sheldon Whitehouse. He understands it for the deep, simple problem it is: that we can’t keep burning this stuff.” (Full disclosure: McKibben is a member of Grist’s board of directors.)

One area where Sanders indisputably differs from Clinton is trade. Clinton, like her husband and Obama, has been an ardent supporter of free trade agreements. Some environmentalists worry that these agreements—like NAFTA, CAFTA, and the Trans-Pacific Partnership (TPP) that is currently under consideration—give polluting companies too much power to undermine environmental regulations in signatory nations. As secretary of state, Clinton supported the TPP, although as a candidate her campaign advisors say she hasn’t made up her mind on it. Sanders is one of the most skeptical members of the Senate on trade agreements and he is currently helping to lead the charge against the TPP.

To describe Sanders’ challenge against Clinton as uphill would be too generous. It’s more like climbing Mt. Everest—without oxygen or a guide. But by bringing attention to some of these issues, he may raise awareness and draw Clinton out. Sanders’ office declined to comment for this story, citing an overwhelming number of interview requests following announcement of his candidacy. That speaks to the megaphone a presidential campaign can grant a candidate, especially in a nearly empty field. Sanders is sure to use it for worthy causes. Will keeping fossil fuels in the ground be one of them?