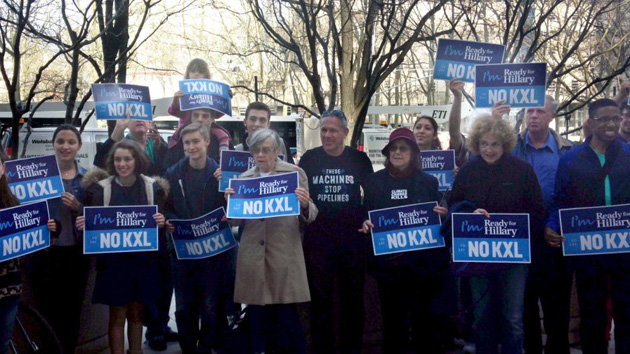 This article originally appeared in Grist and is republished here as part of the Climate Desk collaboration.

Notwithstanding the Washington Post‘s inevitable jokes about “fedoras, flannel shirts and beards” outside Hillary Clinton’s campaign office “in the midst of hipster-cool downtown Brooklyn,” there actually is no such thing as “hipster-cool downtown Brooklyn.” Downtown Brooklyn is a warren of architecturally undistinguished office buildings and sterile windswept plazas. And so it was on a charmless little patch of sidewalk near the new campaign headquarters that a group of about 20 activists with 350 Action, an affiliate of 350.org, held signs and chanted on Monday afternoon urging Clinton to oppose the Keystone XL pipeline. The signs played on a slogan used by Clinton’s supporters—”I’m ready for Hillary”—by tacking an extra phrase onto the end—”to say NO KXL.”

In a comment that cut to the heart of the contradiction embedded in Clinton’s record—embracing both cuts to carbon emissions and increases in fossil fuel production—Duncan Meisel, an organizer with 350, said, “If you want to stop carbon pollution, keep carbon in the ground!”

Reporters in attendance strained to hear the unamplified speakers over the steady hum of idling buses across the street. What the event lacked in grandeur, though, it made up for in topical importance. Clinton herself has called climate change “the most consequential, urgent, sweeping collection of challenges we face.”

And yet climate activists have good reason to be worried about Clinton’s Keystone stance. In recent years, she has refused to take any position on the pipeline, but in 2010, when she was secretary of state, she said, “we are inclined to” approve it. Says Ben Schreiber, Friends of the Earth’s climate and energy program director, “It was inappropriate for her to make comments about the merits of the proposal when there wasn’t even an environmental impact statement.”

And that’s just one of the many reservations some environmental activists have about Clinton’s past record and current positions. In interviews, they also complain that she promoted fracking abroad as secretary of state, she has ties to Big Oil, and she favors pro-corporate trade agreements. Several of these issues have been gathering steam. Recent reports on large donations to the Clinton Foundation from oil companies have led to criticism from green groups. “This cash connection between the Clintons with natural gas and Big Oil is sincerely troubling,” says Bill Snape, senior counsel at the Center for Biological Diversity. Last week, a coalition of more than 100 environmental and local anti-fracking groups sent a letter to Clinton calling on her to “acknowledge the inherent dangers in shale development and stand with us.”

“We’re quite concerned about fracking, and the fact that [Clinton] was actually advocating for other countries to frack as part of her role at State,” says Ben Schreiber of Friends of the Earth.

None of the biggest national environmental organizations—such as the Sierra Club, Natural Resources Defense Council, and League of Conservation Voters (LCV)—signed the letter to Clinton.* “National [green groups] have their own dance to do with Democratic candidates,” says one environmentalist who asked not to be named discussing other organizations. Withholding criticism allows for friendlier relations with—and, they hope, better access to—Clinton, and more influence over policy development in her campaign and in a future White House. The big groups might believe that this will ultimately mean better outcomes for climate policy than public confrontation. After all, if the Democratic frontrunner tells environmentalists to take a hike and wins without them, then they’re really doomed.

Whatever the reason, Clinton was warmly received when she spoke at an LCV dinner in New York last fall. Upon Clinton’s campaign announcement on Sunday, LCV issued a cautiously optimistic statement that listed her climate bona fides from her time in the Senate and State Department while noting that she must lay out specific climate action plans in her campaign platform. The group praised Clinton for having supported cap-and-trade and an international climate accord, but one could detect a hint of uncertainty from LCV as to how much Clinton will emphasize climate. “We welcome Secretary Clinton to the Presidential race, and encourage her to build on her long record of environmental leadership by making climate change a top priority of her campaign,” said LCV President Gene Karpinski.

He should have been pleased to see what Clinton campaign chair John Podesta tweeted on Sunday:

As ThinkProgress’s Judd Legum noted, to make climate and clean energy one of the campaign’s top three issues would be unprecedented for any major party nominee. “The Podesta tweet is a sea change, that would not have happened in 2008,” says Karthik Ganapathy, a spokesperson for 350.

Still, 350 and other aggressive green groups are openly ambivalent about Clinton. Friends of the Earth and the Center for Biological Diversity both signed the anti-fracking letter to Clinton. “Our concerns [about Clinton] are some of the same concerns we have with President Obama as well,” says Schreiber. “We’re quite concerned about fracking, and the fact that she was actually advocating for other countries to frack as part of her role at State.” Another aspect of her State Department tenure that worries greens is her support for free trade agreements such as the Trans-Pacific Partnership that would allow transnational corporations to challenge environmental regulations in signatory nations.

Climate hawks won’t all be such cheap dates any more. Some of them are demanding not only that Clinton say she will limit emissions and promote renewables, but that she commit to keeping fossil fuels in the ground.

Says Kelly Mitchell, Greenpeace’s climate and energy campaign director, “Hillary Clinton needs to show that she would meet this challenge with the leadership required of our next president—that means standing up to the fossil fuel lobbyists, taking serious steps to keep coal, oil, and gas in the ground, and putting the United States on a path to 100 percent renewable energy.”

*Correction: This story initially stated that the Sierra Club, Natural Resources Defense Council, and League of Conservation Voters didn’t respond to requests for comment. In fact, Grist did not ask NRDC or its political arm, NRDC Action Fund, for a comment, and the request to LCV went to a staffer who had recently left the organization.