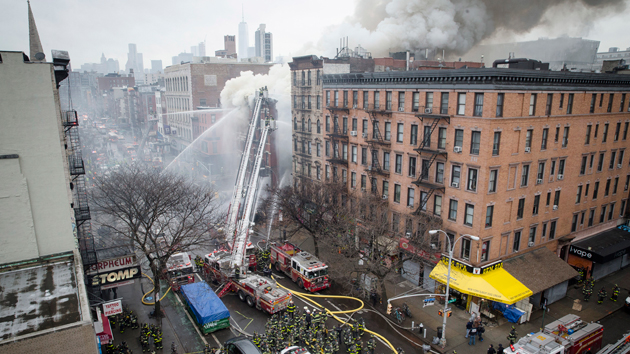 Update: The New York Daily News reports that at least two people are missing, as firefighters continue to contain the fire. The injury toll has risen to at least 19, with four people in critical condition.

Fire crews first responded to calls of a building collapse at 3:17 p.m. on Second Avenue near Seventh Street in Manhattan. Less than an hour later, about 250 firefighters rushed to the scene as the fire upgraded to a seven-alarm blaze. Two other buildings were damaged in the fire, and at least one of them is at risk of collapsing. Thursday’s blast comes a year after a gas explosion destroyed two buildings in East Harlem and left eight people dead. National Transportation Safety Board investigators later found a crack in the city’s aging gas pipeline near one of the buildings.

New York City Mayor Bill de Blasio said in a press conference with reporters that preliminary findings suggest the explosion may have been caused by plumbing and gas work. He added that Con Edison inspectors arrived at the site more than an hour before the blast to examine private gas work being done at one of the buildings, but found the work had not passed inspection. No gas leaks were reported before the explosion. A Con Edison spokesperson told the New York Times a few of the buildings on Second Avenue had been “undergoing renovations” since August. The gas and electric utility company planned to shut down gas in the area.

There was just an explosion on 2nd avenue and 7th street east village pic.twitter.com/jvSbfdCSSe

“We are praying that no other individuals are found injured and that there are no fatalities.” –@BilldeBlasio

We’ll continue to update as we learn more.