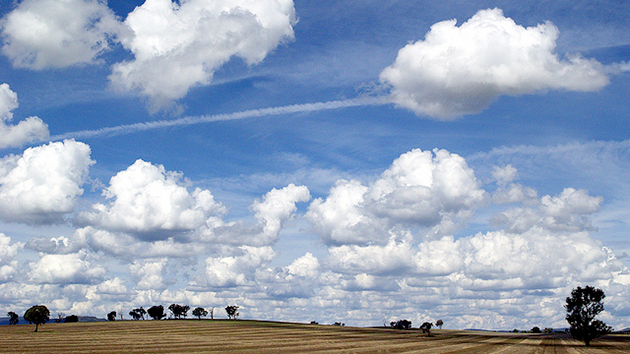 You might have heard of “geoengineering.” It’s the highly controversial theory that humans could slow, stop, or even reverse global warming by “hacking” the planet with epic technological feats that would alter the chemical composition of the atmosphere.

The idea has been around for a few decades, but there have been only a few actual experiments with it, most recently in 2012 when a rogue American millionaire dumped 220,000 pounds of iron sulfate into the Pacific Ocean. His goal was to create a massive, carbon-sucking plankton bloom. The effort succeeded, but was condemned by many scientists, the Canadian government, and the United Nations for violating international laws and for forging ahead with little regard for potential ecological fallout.

Every now and then, geoengineering of one kind or another gets floated by the media as a possible silver bullet if we continue to fail to make meaningful reductions to greenhouse gas emissions. But as the plankton debacle vividly illustrated, there are any number of very good reasons why the proposition never seems to get any traction. Ideas for how to do it are either too expensive, too entangled with thorny legal and geopolitical complications, too ineffective, or all of the above.

“We definitely don’t think that we’re ready to say this is something worth doing,” one of the study’s lead authors said.

These issues and more were laid bare today in the most comprehensive assessment of geoengineering to date, a two-volume study involving dozens of scientists that was pulled together by the National Academy of Sciences (a nongovernmental organization that produces peer-reviewed research). The reports offered a fairly damning critique of geoengineering and found that while there could be value in continuing to research the technology, it will never be a panacea for climate change, and we’re definitely not ready to start using it yet.

“We definitely don’t think that we’re ready to say this is something worth doing,” said atmospheric chemist Lynn Russell of the University of California, San Diego, a lead author on one of the report’s volumes.

There are two basic categories of geoengineering, each with its own unique obstacles. The first involves pulling carbon dioxide out of the atmosphere and burying it underground, effectively reversing the man-made greenhouse gas pollution that causes global warming. (The plankton incident fits this category; the idea was that the plankton bloom would consume a bunch of CO2 and then take it to the ocean depths when the plankton died.) The second kind involves “seeding” the atmosphere with particles that would increase its reflectivity—what climate scientists call “albedo”—and send more sunlight back into space.

Before getting into the whys and wherefores of both categories, it’s important to note one key finding of the study: A major risk of all geoengineering is that scientists really don’t know that much about what the risks are. This is a relatively young field, Russell explained, but more importantly, it hasn’t held much attention for scientists because even the most optimistic scenarios for geoengineering aren’t a preferable substitute to the more familiar endeavor of reducing greenhouse gas emissions from cars, power plants, and other sources.

“As a community we’ve been afraid to do the research,” Russell said, “because we thought it would take attention away from mitigating greenhouse gases.”

On that note, this week negotiators from around the world are meeting in Geneva to make strides toward a international climate accord expected by the end of this year. And recently President Barack Obama has announced a few major initiatives—new limits on carbon dioxide and methane emissions—that should slash America’s greenhouse footprint. But progress is still too slow for most climate hawks: Even the usually-optimistic United Nations climate chief admitted last week that the upcoming accord is unlikely to keep global warming within the 3.6 degree Fahrenheit limit called for by scientists and agreed to by governments.

With that in mind, Russell said, “there is an obligation to think about whether, even if climate engineering isn’t a great idea, it might not be as bad as nothing.”

Which brings us back to our two categories. Here’s a useful rundown of the risks and rewards of each, from the report: 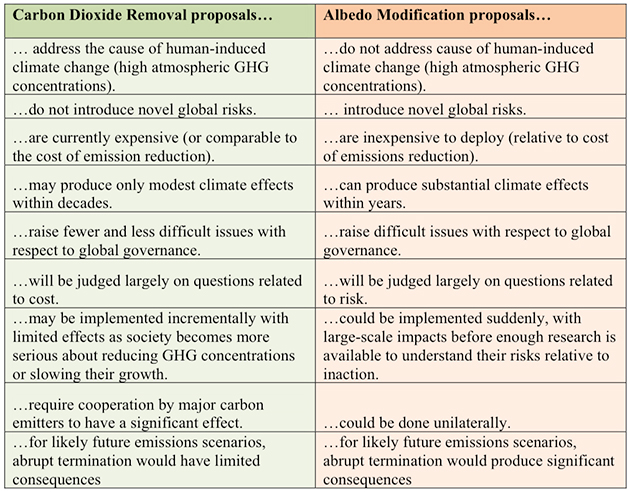 Note the row fourth from the bottom, about how both kinds of geoengineering should be judged; this point is key for understanding why the scientists are against rolling out geoengineering today.

The report finds that existing carbon dioxide removal proposals (like ocean iron fertilization; a process called “weathering” that chemically dissolves CO2 in the ocean; or giant machines that suck carbon directly out of the air) are too expensive to deploy widely. Even if future engineering advances were to bring those costs down, they would have to be weighed against the costs of the more straightforward route: To stop burning fossil fuels for energy. Pulling carbon back out of the atmosphere on a scale necessary to alter the global climate, the report says, is unlikely ever to be more cost-effective than not putting it there in the first place. One notable exception is reforestation, which is cost-effective and readily deployable (a study yesterday from Oxford University argued that planting trees is one of the “most promising” short-term fixes for climate change).

Artificially blocking sunlight would have unknown consequences for photosynthesis by plants and phytoplankton, and high concentrations of sulfate aerosols could produce acid rain, says one expert.

The outlook for albedo modification is somewhat more frightening, in part because the technology is already relatively cheap and available. China already creates an estimated 55 billion tons of artificial rain per year by “cloud seeding”—launching chemical-filled rockets into the upper atmosphere that accelerate the formation of ice crystals that cause rain. Albedo modification would work essentially the same way, using airplanes or rockets to deliver loads of sulfate aerosols into the stratosphere, where they would bounce sunlight back into space. But if the technology is straightforward, the consequences are anything but.

The aerosols fall out of the air after a matter of years, so they would need to be continually replaced. And if we continued to burn fossil fuels, ever more aerosols would be needed to offset the warming from the additional CO2. Russell said that artificially blocking sunlight would have unknown consequences for photosynthesis by plants and phytoplankton, and that high concentrations of sulfate aerosols could produce acid rain. Moreover, if we one day suddenly ceased an albedo modification program, it could cause rapid global warming as the climate adjusts to all the built-up CO2. For these reasons, the report warns that it would be “irrational and irresponsible to implement sustained albedo modification without also pursuing emissions mitigation, carbon dioxide removal, or both.”

To be fair, plenty of diversity of opinion exists among scientists. One long-time proponent of geoengineering, Harvard physicist David Keith (who was not on the committee behind this report) told the Washington Post yesterday that the technology is nothing to be afraid of: “A muffler is a technological fix for the fact that the internal combustion engine is very noisy, and people don’t have a problem with mufflers,” he said.

The difference in this context is that mufflers don’t come with a host of unknown, potentially catastrophic side effects. Either way, the disagreement this topic inspires just between scientists gives you some indication of how far away we are from making it practically and politically feasible. Still, Russell said, we should continue to research both kinds of geoengineering, if only to be able to express what a large-scale experiment would actually look like.

“The stage we’re at now is not even having enough information to make that decision,” she said. “But if we did put together a serious research program, we would make a lot of advances relatively quickly.”