Every time you eat, you’re rolling the germ dice. According to the Centers for Disease Control and Prevention, 1 in 6 Americans contracts a foodborne illness annually; 128,000 are hospitalized, and 3,000 die. Pathogens from meat kill more people than those from any other food group. A CDC study found that between 1998 and 2008, contaminated meat was responsible for 29 percent of all deaths from foodborne illness (23 percent of deaths were from produce, 15 percent from dairy and eggs, and 6.4 percent from fish and shellfish).

Most carnivores don’t let the risk of sickness stop them from eating meat—and a lot of it. The average American eats nearly 271 pounds of meat a year. But here’s the good news: When it comes to foodborne illness, not all meats are equally risky. So which kinds are safest? A few tips for choosing the least germ-ridden cuts:

1. There is no such thing as risk-free meat. Or risk-free food in general, notes Donald Schaffner, a professor of food microbiology at Rutgers University. If the food isn’t cooked sufficiently, or if the preparation area isn’t clean, “it doesn’t matter whether you’re eating chicken, steak, or pork,” he says. “Food prepared in an unclean environment is always going to be high risk.” 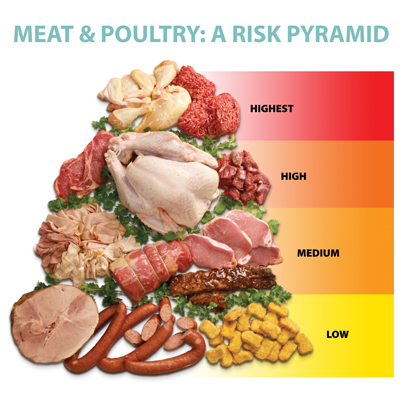 2. But some cuts are more likely to make you sick. In 2013, researchers from the Center for Science in the Public Interest (CSPI) analyzed data about outbreaks, illnesses, and hospitalizations from foodborne pathogens in particular kinds of meat between 1998 and 2010. The meat risk pyramid to the right illustrates their findings.

3. Contaminated chicken sickens more people than any other meat. That’s partially because we eat so much of it—more than 50 pounds a year per person. But it’s also because of the way that chicken is prepared and cooked, says Caroline Smith DeWaal, CSPI’s director of food safety. Commercial chicken plants typically dip the meat in several baths before packaging, giving bacteria plenty of opportunity to spread. What’s more, says Smith DeWaal, it’s harder to cook away bacteria in chicken. “Chicken has creases and folds in the skin,” she says. “Pathogens can hide in those folds. A lot of other meat doesn’t even come with skin on.”

4. Ground beef is the second riskiest kind of meat. One reason for this, says Smith DeWaal, is that during grinding, “the pathogens on the surface of the meat get pushed into the center.” If that ground meat isn’t properly cooked—say, in the middle of a rare burger—the germs get a free ride into your digestive tract.

5. Steaks, pork chops, and other whole-muscle meats are the safest bet. That’s because the cooking process can easily kill off bacteria on the cut’s surface, while the inside of the meat is essentially sterile, protected from any potential pathogens—in theory.

6. But steak isn’t as safe as it should be. According to the US Food Safety and Inspection Service, about 10.5 percent of steaks are subjected to a process called mechanical or needle tenderization, where metal blades or pins repeatedly puncture the meat before packaging. While this technique improves the meat’s texture, it also moves bacteria from the surface into the center of the cut, where the germs may survive cooking. The scary part: Processors are not required to label cuts that have been mechanically tenderized—so there’s no way to know whether your steak might have extra interior bacteria. Mechanically tenderized beef has caused several recent outbreaks, including one in Canada in 2012, which sickened 18 people and led to the biggest beef recall in Canadian history. In 2013, the US Department of Agriculture promised to require labeling on mechanically tenderized beef, but the agency is stalling on finalizing that rule.

7. Pork isn’t as dangerous as you thought. One interesting takeaway: Pork, which has a reputation as a veritable petri dish, is actually relatively safe. One reason is that we now cook the hell out of it. “Our grandmothers told us we really needed to cook pork really well,” says James Dickson, a professor of microbiology at Iowa State University. Another reason is that rules for feeding pigs have changed. Until around World War II, domestic pigs used to be fed garbage containing animal feces, which are full of the parasite Trichinella, source of the serious disease trichinosis. Laws passed in the 1950s and ’60s ended that, and the incidence of trichinosis dropped dramatically. Between 2008 and 2012 there were just 84 cases of trichinosis, only 10 of which were associated with commercial pork products. (Interestingly, 41 of the cases were associated with bear meat.)

8. Cold cuts of all kinds are also less dangerous than you thought. The CSPI report classifies them as medium risk, unless you’re pregnant, elderly, or have a weakened immune system. Deli meats are at particularly high risk for the pathogen Listeria monocytogenes, which causes listeria, one of the most dangerous of all foodborne illnesses. Most of us can eat cold cuts contaminated without getting sick, but for senior citizens and immune-compromised people who contract listeria, the hospitalization rate is 90 percent. While pregnant women might not show symptoms, the bacteria can attack the fetus, causing miscarriage or stillbirth.

9. Processed foods like sausage, hot dogs, and chicken nuggets, while terrible for you nutritionally, are actually relatively low-risk when it comes to bacteria. “That’s because the processing—whether it’s cooking or chemicals or whatever—kills the pathogens,” explains Smith DeWaal. “We’re not saying they are great for you, but they are low risk when it comes to acute foodborne pathogens.”

11. Cooking your meat correctly won’t necessarily prevent you from getting a bug. Even if you heat your meat to the proper temperature, the germs it carries can still get onto surfaces in your kitchen, where they can contaminate other food. In order to cut down on cross-contamination risk, clean your cooking surfaces and utensils thoroughly, and never wash meat before cooking “because that will just splatter the germs,” says Smith DeWaal.

12. Requesting your meat “well done” or “medium” won’t save you from illness, either. Those terms are vague and subjective, says Doug Powell, a former professor of food safety and current publisher of the foodborne illness site Barfblog. “When I go to a restaurant and they ask me how I want my steak, I say, ‘140 degrees,'” he says. “If they give me a funny look I get up and leave.”