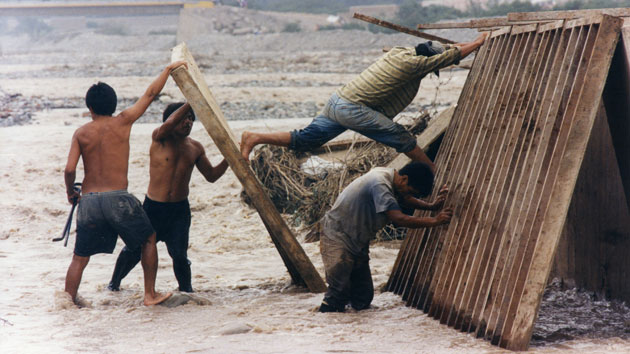 The weather pattern known as El Niño could be stunting kids’ growth—even years after the extreme storms abate, a new study finds. Researchers at Johns Hopkins’ Bloomberg School of Public Health, led by assistant professor of medicine and international health William Checkley, say they have conducted the first study on the long-term health consequences of El Niño weather systems. According to the paper published today in BioMed Central, children born around the time of the severe 1997-’98 El Niño living in coastal Peru, one of the regions hardest hit by the weather pattern, are significantly shorter for their age than children born before El Niño hit.

Children in coastal Peru born around the time of El Niño are significantly shorter for their age than children born before the weather pattern hit.

El Niño weather patterns occur in the equatorial Pacific region, often off the northern coasts of Peru and Ecuador. During El Niño patterns, the region’s warm water, which is usually skimmed away by the wind and pushed towards Asia and Australia, doesn’t circulate like it’s meant to. Instead, it builds up and heats the air above it, creating clouds. The changes in water temperatures and cloud formations lead to higher chances of torrential rains, inhospitably warm fish habitats, and intense flooding in the Americas. This tends to happen every three to seven years, and begins slowly in the summer, peaking in the winter.

Recent findings suggest that climate change will not necessarily disrupt this cycle, but might increase the intensity of the weather events when they do occur. Checkley noted that climate change was not a focus in the study, but confirmed that its impact may worsen future El Niño events.

Which is bad news for children living in coastal areas heavily affected by El Niño weather events. That’s because this extreme weather can make food hard to come by, and increase the likelihood of infection. “Lack of food, food insecurity and increased infections are all likely drivers to a decreased growth in children,” Checkley told me. The study zeroed in on children living in rural villages in coastal Peru, where food insecurity and poverty are at much higher levels than in places like California, where El Niño weather patterns can also settle.

The team measured the height, weight, and fat, and muscle of a random sample of 2,095 children born between 1991 and 2001 in Tumbes, Peru—a city on the northwestern coast. A decade after the extreme ’97 El Niño, in November and December of 2008 and 2009, they found that, on average, the children born during and shortly after El Niño were shorter and had less lean mass, or body weight minus fat, than children born before the event.

The study mentions that in years following the extreme weather patterns, some children were able to gradually recover losses in height, but that children in homes that were heavily flooded were not able to catch up. “Even three years after the initial disaster, it still affected children’s nutritional status,” reads a press release about the study.

Epidemiologists consider stature a “surrogate measure” of chronic malnutrition and disease for certain age groups and genders; stunted growth can be an early predictor of delayed motor skills, cognitive impairment, and higher risk pregnancies later in life. “Just as rings act as indicators of natural disaster experienced by a tree throughout its life, exposure to severe adverse weather events in utero or in early life can leave a long-lasting mark on growth and development in young children,” the study reads.

According to Madeleine Thompson, a scientist specializing in climate and health at the International Research Institute for Climate and Society, it is “highly likely” that these results are “indicative of a large scale impact of an El Niño related disaster.” She linked these results to a 2004 study of an El Niño related malaria epidemic in areas of Tanzania, where there was a “very significant impact” on infants’ birth weights as a result of the disease—an immediate health impact of El Niño.

Of course, the results are still too preliminary to indicate that El Niño alone stunted children’s growth. But the authors note that in interviews with focus groups, “community members did not cite other events occurring during the same period as El Niño that had such a destructive impact on their lives.” Checkley told me that his research squares with past studies of the public health consequences of El Niño events, which include increased risk of infection and social and emotional stress. Flooding and higher temperatures often lead to increased risk of contracting infectious diarrheal and respiratory diseases, especially in poor, overcrowded communities. These illnesses could prevent children from developing properly.

The researchers emphasize the need for further study, especially in light of climate change and the possibility of more and more intense El Niño cycles. The researchers believe that these studies can better help aid workers develop prevention strategies and target aid and response during these types of events. “Given El Niño’s cyclical nature this phenomenon may continue to negatively impact future generations,” said Checkley.