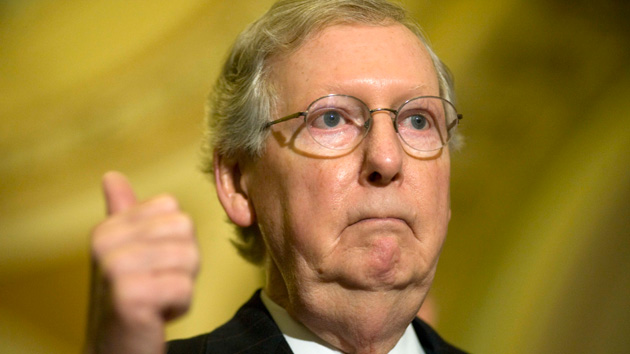 This story originally appeared in The Huffington Post and is republished here as part of the Climate Desk collaboration.

To say Tuesday was a bad day for environmental groups would be an understatement.

In his opening remarks at a National Press Club event recapping the election results Wednesday afternoon, League of Conservation Voters President Gene Karpinski joked that environmental groups had thought twice about even holding the event. “It wasn’t the best night for us,” he said.

Michael Brune, executive director of the Sierra Club, was even more blunt in an interview Wednesday morning. First, he recounted some of the ways 2014 was a success: It elevated the issue of climate change generally and made candidates in a number of key races change the way they talked about the issue. But when it came to electing a slate of pro-environment candidates, which environmental groups spent an unprecedented amount of money on this year, “on that,” Brune said, “there’s been a miserable fucking failure.”

Environmental groups are mourning the loss of several key allies in the Senate, such as North Carolina Democrat Kay Hagan and Colorado Democrat Mark Udall. And they’re looking at a Senate that is going to be a lot more hostile to their agenda: With Republicans in control, the upper chamber will likely seek to undo many of the actions that the Obama administration has taken to address climate change and other environmental threats.

Republican leaders have made it very clear that a top priority is to pass legislation that would force approval of the Keystone XL pipeline. Environmental groups have urged President Barack Obama to reject the pipeline, and are holding onto the hope that he’d veto any such measure that comes to his desk.

There are other concerns, like the fact that Sen. James Inhofe (R-Okla.), a guy who wrote a book saying climate change was a giant hoax, is poised to take control of the Environment and Public Works Committee, the Senate’s most powerful environmental panel.

In a Wall Street Journal op-ed published Thursday that laid out their legislative agenda, House Speaker John Boehner (R-Ohio) and likely Senate Majority Leader Mitch McConnell (R-Ky.) also pledged to take other measures that they said would “remove barriers to job creation and lower energy costs for families”—i.e., block the Obama administration from implementing a variety of environmental regulations. That’s what makes environmental groups most nervous.

The Republican-controlled House of Representatives has pushed for a number of measures over the last few years that the Senate will now be likely to take up: blocking the Environmental Protection Agency from regulating greenhouse gas emissions and mercury and ozone pollution; preventing the Army Corps of Engineers from updating rules on disposal of mine waste; blocking the Department of the Interior from enforcing rules about drilling on public lands; and limiting the department’s environmental review process for oil and gas lease applications.

The 60-vote filibuster in the Senate will probably keep the worst of those measures from passing as stand-alone legislation, and even if that happens, environmental groups are hopeful that Obama will veto them. A bigger concern is that these provisions could get attached as riders to must-pass spending bills. But environmental advocates are hopeful that Obama will block those as well.

“In previous fights, the president has made clear that he will not be cowed by an appropriations strategy [with] people trying to load up spending bills with provisions the public doesn’t support,” said David Goldston, director of government affairs at the Natural Resources Defense Council, in a call with reporters Thursday.

Goldston tried to see the bright side of this. A lot of what the House has passed has flown under the radar, at least in terms of news coverage, because it was not going to clear the Senate. Now, Goldson said, “the public will now see what the Republican agenda actually is and what’s at stake here…As the public sees what the extreme anti-environmental agenda is, there’s a backlash.”

The consequences of Tuesday’s Republican wave go beyond Capitol Hill. In fact, a potentially bigger concern for those who favor addressing greenhouse gas emissions may be the results of a number of gubernatorial elections. Once the Environmental Protection Agency finalizes its new limits on emissions from power plants, each state will have to develop its own plan to meet them. And the midterm elections were mostly bad news on that front. Climate change-denying governors were re-elected in Florida, Maine and Wisconsin, and Republican candidates pulled off surprise wins over the enviro-endorsed Democrats in both Maryland and Massachusetts.

“It was a hard night last night for our governors,” said Sierra Club political director Melissa Williams on Wednesday. “It’s something we’re going to have to figure out as all these states move toward creating their emission plans.”

Environmental groups say they’re not turning down the heat on politicians for the next two years—or the cash. Tuesday was “not a referendum on climate,” said Elizabeth Thompson, president of the Environmental Defense Action Fund, the EDF’s political arm. “It was a really, really bad day for Democrats.” As for the more than $85 million environmental groups spent, she maintained that it was still “too low.”

“It’s really expensive to play effectively in politics,” said Thompson. “I think the resources were very well spent. I think we needed more.”

In the meantime, advocates are looking for the silver linings on this election—whatever linings they can get. One that many pointed to was the advent of the “I’m not a scientist” trope that many Republican candidates are using to answer climate questions. That response, environmental groups believe, might show that the party is shifting away from complete denial of climate change.

“It looks like it is now unacceptable for many candidates to say that they are denying climate science outright,” said the Sierra Club’s Brune. “If that’s true, and if that sticks, that’s significant. It could portend a bigger shift in the party.”