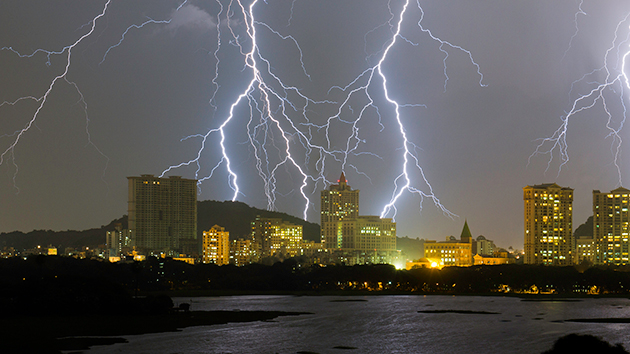 By now we’re familiar with some of the scarier potential impacts of climate change: Floods, fires, stronger hurricanes, violent conflicts. Well, here’s a new one to add to your nightmares. Lightning strikes in the continental United States will increase roughly 12 percent for every degree Celsius of global warming, a study published today in Science finds. If warming continues unchecked, that could translate into a 50 percent increase in lightning by the end of the century—three strikes then for every two strikes now. (On average, there are currently about 25 million strikes per year.)

Does this mean an increase your odds of getting struck by lightning? Technically yes, I guess, but I wouldn’t worry about that. Instead, the increase matters because lightning strikes are the principle cause of wildfires, which are already predicted to become more severe due to global warming. In one 24-hour period in August, lightning in Northern California started 34 wildfires. The study doesn’t make any specific predictions about wildfire activity, but knowing about future lightning conditions is an important part of that equation.

Lightning is notoriously hard to account for in climate models, because the models can only represent large-scale atmospheric forces like wind speed, moisture, and temperature; they can’t show relatively small electric pulses, said Anthony Del Genio, an atmospheric scientist for NASA who was not involved with the study. So to get a sense of how lighting patterns will change in future climates, scientists have to rely on “proxies”—third-party forces they can model that have a known relationship to lightning. Early lightning studies in the 1990s, for example, made inferences based on how the heights of clouds—thought to be one contributor to lightning patterns—are expected to change with global warming, Del Genio said.

But lightning is a complex phenomenon that still isn’t fully understood by atmospheric scientists, so proxies have mostly proven to be imperfect for one reason or another. As a result, the Science study explains, previous estimates for how lightning will change with global warming range from an increase of 5 percent to and increase of more than 100 percent for each degree of temperature rise. Not very informative.

This study presents a new proxy for lightning—a proxy that author David Romps of the University of California-Berkeley thinks is much stronger than any of the previous ones. It’s actually a combination of two proxies: precipitation and “CAPE,” a standard measure of the kinetic energy clouds hold as they rise in the atmosphere. Lightning is the product of electrical charges caused by ice particles of different densities colliding in clouds, so Romps chose factors that would be necessary for lightning to occur: Enough precipitation to form ice, and enough upward energy to keep the ice suspended.

Taken together, those proxies accurately predicted 77 percent of actual lightning strikes observed in the US in 2011 by a national web of electromagnetic sensors. That result, Romps said, is a sign that these proxies are “doing a remarkably good job” of representing lightning patterns.

The video below shows the data Romps used to compare his hypothesis to observed lightning strikes, here represented as red dots. The original was over five minutes long—with one second for every day of the year—so we sped it up a bit.

The next step was to use data from 11 existing climate models to find out how precipitation and CAPE are predicted to change with global warming. Although Romps said the correlation between warming and CAPE is still being studied, all 11 models predicted it would increase by the end of the century. In other words, global warming will probably produce clouds that have stronger upward momentum. Combine that with predicted precipitation and, according to Romps, you get a sense of how much more lightning we can expect to see.

In this study, Romps’ dataset paints its predictions with a broad brush; the data isn’t detailed enough to know how lightning will change in specific parts of the country, or how the frequency will change in different seasons. But Del Genio says that the study advances our understanding of which weather forces contribute most to lightning. What’s more, he says, Romps’ work give us a strong indication of what lies ahead.