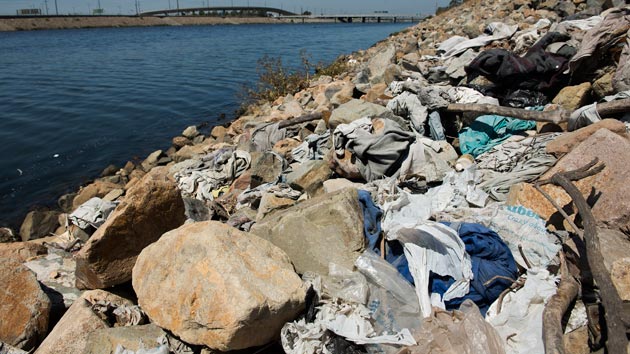 Worldwide, consumers use an estimated 1 trillion plastic bags each year—nearly 2 million a minute—with the use time of a typical bag just 12 minutes. Californians alone throw away 14 billion a year, creating 123,000 tons of waste and untold amounts of litter.

A cotton bag must be used 131 times before its global warming impact is less than using single-use plastic bags.

There is evidence that bag bans and taxes can cut down on some of this waste: Ireland’s 2002 tax cut bag usage between 75 and 90 percent. An analysis of bag use in Australia found that 72 percent of customers accepted single-use bags that were offered for free. When a nominal fee was charged, usage dropped to 27 percent (33 percent switched to reusable bags and 40 percent made do without).

In fact, Californians faced with municipal bag fees often opt to skip the bag altogether. In an analysis of three major California municipalities with bag bans, 39 percent of customers left the store without a bag (opposed to 17 percent pre-ban).*

Although customers avoiding bags is an obvious environmental win, the same study found that paper bag use increased from 3 to 16 percent. While disposable plastic bags’ manufacture is relatively energy intensive—according to the Australian government, a car could drive 36 feet with the amount of petroleum used to make a single plastic bag—paper bags aren’t any better. In fact, a paper bag (which will still be available for ten cents) must be used three times before its global warming impact is lower than continuing to use single-use plastic bags, according to a study by the UK Environment Agency.

What about the customers who switch to reusable bags? The California study found that, faced with bag bans, customers increased reusable bag use from 5 to 45 percent. It is unclear which varieties of reusable bags are the most popular, but one common type, the non-woven polypropylene bag (the kind you might buy in the Whole Foods checkout line), must be used 11 times before its global warming impact is less than disposable bags. A standard cotton tote requires 131 uses. Although the study does not factor in other benefits of reusable bags, such as reduced litter, it underscores the fact that reusable bags are only beneficial if they’re actually used. Freebie branded totes gathering dust in closets are not worth the energy they took to produce.

Still, despite the higher production toll, the environmental think tank Earth Policy Institute (EPI), which has studied plastic bag bans, is “definitely in favor of reusable bags,” Director of Research Janet Larsen tells Mother Jones. “Overall, we’re advocating for a movement away from the disposable society and use-and-toss mentality.”

One-third of Californians already live in municipalities with plastic bag bans, including those in San Francisco and Los Angeles. EPI tracks all known bag restrictions, 133 of which are in the United States:

No one is sure how long a plastic bag takes to decompose, but estimates range from 500 to 1,000 years. Even then, they never fully biodegrade; they just break down into ever-tinier plastic pellets. Each year, tens of thousands of whales, birds, seals, and turtles die after getting entangled with bags or mistaking them for food. In 2010, a gray whale that was beached and died in Seattle was found to have more than 20 plastic bags in its stomach.

Twice a day, when plastic bags gum up equipment in recycling plants, “you have to turn your equipment off and send mechanics in with box knives to cut them out.”

Improperly recycled bags also cause problems for recycling centers like San Francisco’s Recology. “When people put them in the recycling bin—and they should not do that—they wind up down at the recycling plant and they wrap around a lot of the recycling equipment,” public relations manager Robert Reed tells Mother Jones. About twice a day, “you have to turn your equipment off and send mechanics in with box knives to cut them out.”

Designated plastic bag recycling facilities exist, but the EPA estimates only 12 percent of bags make it there. CalRecycle puts the statewide number even lower at 3 percent. Even when bags are returned to the proper bin, they aren’t truly recycled, but downcycled. “Because plastic bags have a variety of dyes and other additives, it’s hard to know exactly what you’re getting if you melt down a bunch of bags that consumers have used,” explains Larsen. Instead, used bags “generally get turned into something else, such as park benches or flooring material.”

Proposed plastic bag restrictions almost always meet opposition. In 2007, a Safeway lobbyist in Annapolis, Maryland, called a proposed bag tax “un-American.” Padilla’s last attempt, a similar bill introduced last year, was defeated by three votes. This time around, his bill includes a grant program to help bag factories transition from single-use to reusable bags. Even with this provision, many manufacturers like California-based Crown Poly oppose the bill, saying it will force industry layoffs.

The plastic bag industry’s American Progressive Bag Alliance funded attack ads calling the bill a dirty deal between politicians and grocers, who will now be able to charge for bags:

In Hong Kong, a plastics industry-funded study claims that overall plastic bag use increased after the city implemented a bag tax, since consumers who had previously reused grocery bags began purchasing reusable bags and heavy garbage bags. Some Californians have complained that they already reuse plastic bags to clean up after pets and line wastebaskets, although it seems unlikely that the average family finds uses for the 1,500 bags brought home each year.

Another plastics-industry-backed study at the University of Arizona prompted fears after finding E. coli in 12 percent of tested reusable canvas grocery bags—though the lead author of the report told NPR that the bacteria found would not make the average healthy person sick. The report also found that more than 99.9 percent of bag bacteria can be killed by machine or hand washing, something only 3 percent of bag users actually do.

Marine researcher Charles J. Moore writes in a recent New York Times op-ed that plastic pollution in the ocean may be killing more animals than climate change. “Hundreds of species mistake plastics for their natural food,” he writes, not only sickening wildlife but also “adding to the increasing amount of synthetic chemicals unknown before 1950 that we now carry in our bodies.”

In a press release, Nathan Weaver of Environment California says the ban is an “important step forward” that “shows that we can achieve lasting victories for ocean and environmental health. Nothing we use for a few minutes should pollute our ocean for hundreds of years.”

*This post has been updated to address the various alternatives to single-use bags.