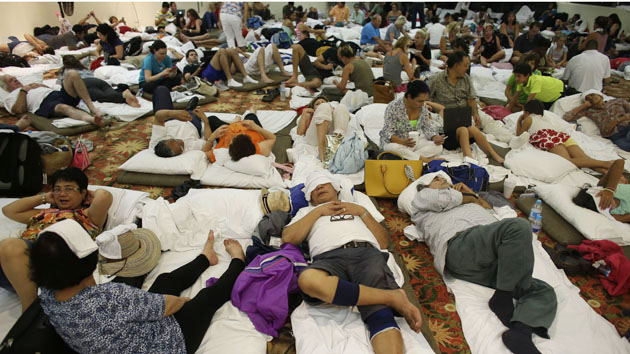 Tourists in a shelter at a Los Cabos resort. Victor R. Caviano/AP

Up until now, the records set by the stunning 2014 Eastern Pacific hurricane season have been mostly academic. The storms have been strong and numerous, but they’ve been out at sea off the west coast of Mexico, and haven’t caused much damage.

That changed today, however, with Hurricane Odile—a Category 3 monster that slammed Cabo San Luca early Monday morning, only slightly weaker than its peak Category 4 strength. According to the National Hurricane Center, Odile tied a 1967 storm for the distinction of being the “the strongest hurricane to make landfall in the satellite era in the state of Baja California Sur.” Capital Weather Gang’s Jason Samenow adds that Odile’s “size, strength, and track is a worst case scenario for this region.”

At landfall, the storm had maximum sustained winds speeds of 125 miles per hour. It seems likely that it was the strongest storm on record to strike the posh resort of Cabo San Lucas: The aforementioned 1967 storm, Hurricane Olivia, took quite a different route across the Baja peninsula. It did not strengthen to its peak until it was already in the Gulf of California, between Baja and the Mexican mainland. Samenow quotes Brian McNoldy, an expert on tropical weather for Capital Weather Gang, who observes of Odile that “specifically in Cabo San Lucas, it was the most intense landfall.”

The result? Here’s a firsthand account from a storm chaser, Josh Morgerman, who was seeking refuge in a hotel:

[A]t maybe midnight… BOOM!!!!! The entire glass wall of the lobby EXPLODED– with glass, pieces of building, everything flying to the other end of the lobby. Like an explosion in an action movie. A hotel worker and I ducked under the reception counter– I physically grabbed his head and pushed it under the counter. Glass was everywhere– my leg gashed– blood. We crawled into the office– me, the worker, and the manager– but the ceiling started to lift up. After five minutes of debate– breathing hard like three trapped animals– we made a run for it– went running like HELL across the lobby– which is now basically just OUTSIDE– and made it to the stairwell and an interior hallway. Two nice women dressed my wound….

Here’s an image of tourists huddling in a hotel stairwell: 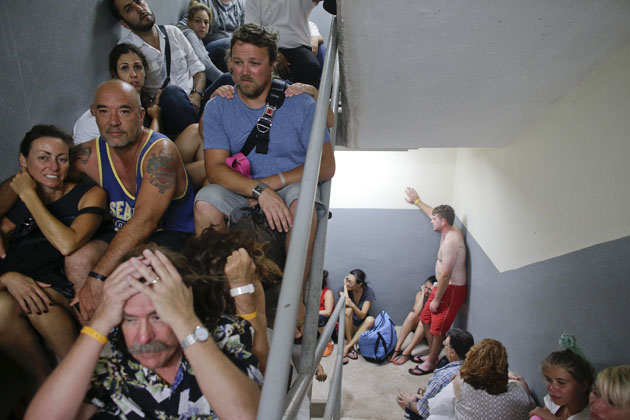 As the Weather Underground’s Jeff Masters points out, if there is one more Category 3 or higher hurricane this year in the Eastern Pacific, it will tie the all-time record of eight such major hurricanes in one season, set in 1992. And there’s still roughly a third of the season to go.

Here’s what Odile looked like yesterday, shortly before landfall: 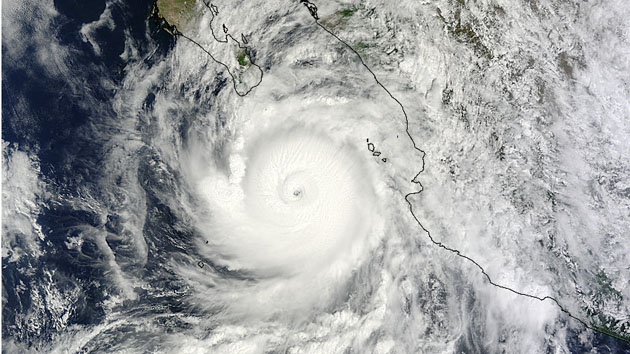