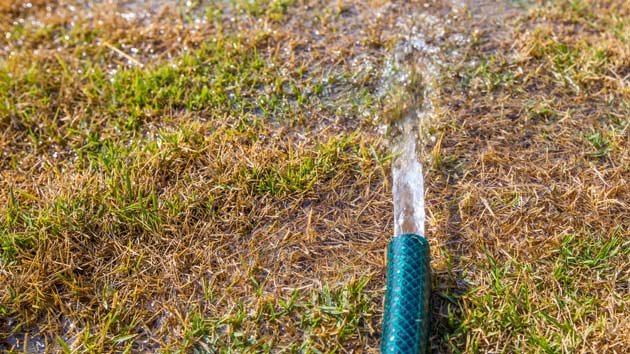 This story was originally published in Grist and is republished here as part of the Climate Desk collaboration.

Here’s a list of things that could now get you fined up to $500 a day in California, where a multi-year drought is sucking reservoirs and snowpacks dry:

Those stern emergency regulations were adopted Tuesday by a unanimous vote of the State Water Resources Control Board – part of an effort to crack down on the profligate use of water during critically lean times.

California Gov. Jerry Brown (D) asked the state’s residents to voluntarily conserve water in January, but they didn’t. Rather, as the San Jose Mercury News reports, “a new state survey released Tuesday showed that water use in May rose by 1 percent this year, compared with a 2011-2013 May average.”

Californians use more water on their gardens and lawns than they use inside their homes, as shown in the following chart from a document prepared for the board members ahead of Tuesday’s vote. So the new rules focus on outdoor use. 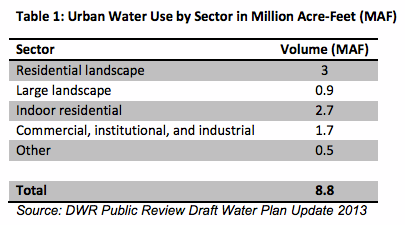 Extreme drought is now affecting 80 percent of the Golden State. Some 400,000 acres of farmland could be fallowed due to water shortages, and water customers in the hardest-hit communities are having their daily water supplies capped at less than 50 gallons per person.

The California Landscape Contractors Association sees an upside, though. It expects that the threats of fines could convince Californians to hire its members to replace thirsty nonnative plants in their gardens with drought-hardy alternatives. “If the runoff prohibition is enforced at the local level, we expect it to result in a multitude of landscape retrofits in the coming months,” association executive Larry Rohlfes told the water board in a letter dated Monday, one of a large stack of letters sent by various groups and residents in support of the new rules. “The water efficient landscapes that result will help the state’s long-term conservation efforts—in addition to helping the state deal with a hopefully short-term drought emergency.”