The skies are threatening to pour on the Apple solar farm but as the woman in charge of the company’s environmental initiatives points out: The panels are still putting out some power. Apple is still greening its act.

The company, which once drew fire from campaigners for working conditions in China and heavy reliance on fossil fuels, is now leading other technology companies in controlling its own power supply and expanding its use of renewable energy.

After converting all of its data centers to clean energy, the Guardian understands Apple is poised to use solar power to manufacture sapphire screens for the iPhone 6, at a factory in Arizona.

And in a departure for its reputation for secretiveness, Apple is going out of its way to get credit for its green efforts.

“We know that our customers expect us to do the right thing about these issues,” Lisa Jackson, the vice-president of environmental initiatives told the Guardian.

This week the company invited journalists on a rare tour of its data center in North Carolina to showcase its efforts.

Until a year ago, the telegenic Jackson was the front woman for Barack Obama’s environmental ambitions as the administrator of the Environmental Protection Agency.

Now she is leading the effort to shrink Apple’s carbon footprint—and make sure customers realize the company is doing its bit to decarbonize its products and the internet.

Data centers require huge loads of electricity to maintain climatic conditions and run the servers carrying out billions of electronic transactions every day.

With Apple’s solar farm, customers could now be confident that downloading an app or video-chatting a friend would not increase carbon pollution, Jackson said.

“If you are using your iPhone, iPad, Siri or downloading a song, you don’t have to worry if you are contributing to the climate change problem in the world because Apple has already thought about that for you. We’ve taken care of that. We’re using clean energy,” she said.

“We are aware that almost 70 percent of our carbon footprint is in our supply chain,” Jackson said. “We are actively working on the facilities that we have here in the United States.”

The initiatives mark a turnaround for Apple, which was criticized in the past for working conditions and the use of toxic chemicals at its factories in China and for its heavy reliance on carbon intensive sources such as coal to power the cloud.

Greenpeace now says the company is out ahead of competitors like Google and Facebook, which also operate data centers in North Carolina.

“They are the gold standard in the state right now,” said David Pomerantz, a senior Greenpeace campaigner. “There are a lot of data centers in North Carolina and definitely none has moved as aggressively as Apple has to power with renewable energy,” he said.

The 55,000 solar panels tracking the course of the sun from a 400,000 square meter field across the road from Apple’s data center in Maiden were not in the picture seven years ago when Duke Energy and local government officials sought to entice Apple to open up a data center in North Carolina. 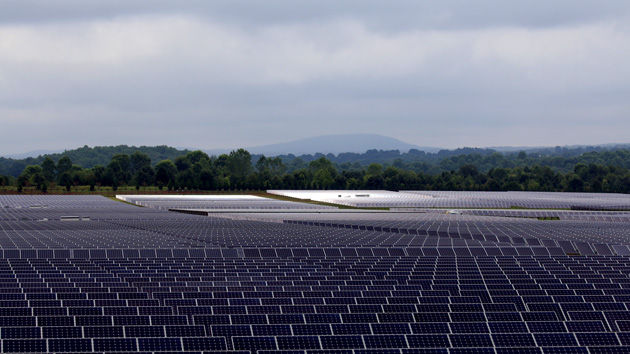 Apple’s solar farm is said to be the largest privately owned array in the US. James West/Climate Desk

Duke Energy, which has a near monopoly over power supply in the Carolinas, set out to lure big companies like Apple, Facebook and Google to the state with offers of cheap and reliable power for the data centers that are the hub of internet.

Data centers, with their densely packed rows of servers and requirements for climatically controlled conditions, are notorious energy hogs. Some use as much power as a small city. In Apple’s case, the North Carolina data center requires as much power as about 14,000 homes—about three times as much as the nearby town of Maiden.

Charging up a smart phone or tablet takes relatively little electricity, but watching an hour of streamed or internet video every week for a year uses up about as much power as running two refrigerators for a year because of the energy powering data centers elsewhere.

That made data centers a perfect fit for Duke, said Tom Williams, the company’s director of external relations. With the decline in textile and furniture factories that had been a mainstay in the state, the company had a glut of electricity.

“What the data centers wanted from Duke was low cost and reliable power. Those two things—cost and reliability—are fundamental to their operations,” he told the Guardian. “What we like about these data centers is that it’s an additional load on our system.”

In the early days, Apple bought renewable energy credits to cover the center’s electricity use. In 2012, the company built its first solar farm across the road from the data center.

Apple built a second solar farm, and announced plans this month for a third, all roughly about the same size, to keep up with the growing use of data. It also operates fuel cells, running on biogas pumped in from a landfill. All of the power generated on-site is fed into the electricity grid.

“On any given day 100 percent of the data center’s needs are being generated by the solar power and the fuel cells,” Jackson said.

The company has been less successful in its efforts to get other companies to switch to solar power. Duke, in cooperation with Apple, launched an initiative last year to encourage other big electricity users to go solar but so far there have been no takers.

Renewable energy accounts for barely 2 percent of the power generated in North Carolina, and Duke does not see the share growing significantly by 2020. 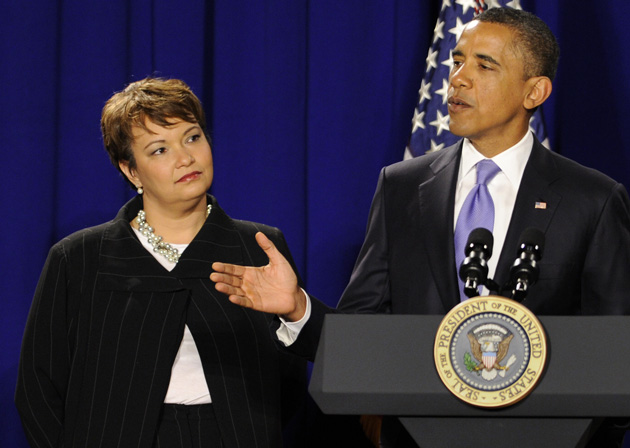 Lisa Jackson with President Obama during her time as EPA administrator. Mike Theiler/DPA/ZUMA

“We think Duke is actually trying to tamp down the solar industry in this state. They are accommodating big customers like Apple who want to do solar farms, but as far as rooftop solar or other solar developments they are doing things that hurt solar,” said Beth Henry, who sits on the board of NC Warn, a local environmental group.

It’s also questionable whether Apple can ever operate entirely off the grid. On bright sunny days, the solar farms generate excess power. But Apple still needs a backup.

“They are still hooked up to our grid,” Williams said. “They are still a very important part of our system. We provide back-up power. I expect it in times of a storm.”

One morning during last winter’s deep freeze—the so-called polar vortex—was a case in point, Williams said. “With the polar vortex we reached an all-time peak in the winter time,” he said. “There was no solar on our system at all.”

What is clear is that Apple and the other big tech companies are in a race to control and clean up the cloud.

Google uses renewable energy to power about a third of its data centers. Facebook says its new Iowa data center will run entirely off wind power when it comes on-line in 2015.

Microsoft earlier this month announced a second wind farm in Illinois to power its data centers.

That expansion of renewable energy on the cloud is likely to continue, Jackson said.

“There is an opportunity in getting ahead of the trend to move towards being self-sufficient on energy and in using clean energy,” she said.

“It’s something our customers value. They ask about corporate values around things like climate change and we are really proud to be able to say that we acknowledge climate change is a problem and that more than just being a problem we are actually doing something about it.”