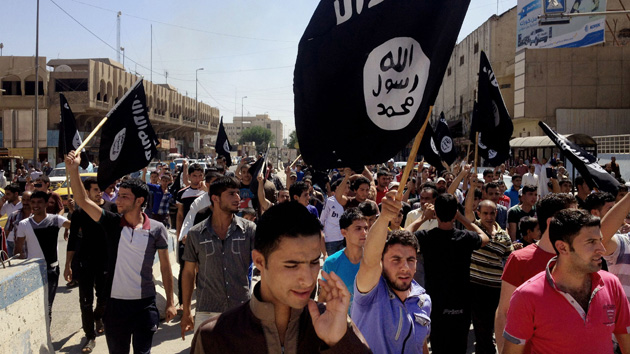 Pro-Islamic State of Iraq and Syria (ISIS) demonstrators chant as they carry al-Qaida flags in front of the provincial government headquarters in Mosul, Iraq, on June 16, 2014.File/AP

As deadly sectarian violence continues to sweep through Iraq, the country’s oil industry is reeling from a brazen attack on one of its key domestic refineries. Here are five things you need to know about the role of oil in the current conflict, and what it means for the United States and the global economy.

UPDATE Thursday, June 19, 2:50pm EST: In a press conference this afternoon in which he announced the deployment up to 300 additional military advisers to Iraq, President Obama was asked how Iraq’s civil war affects the national security interests of the United States. In response, Obama listed several factors, including “issues like energy, and global energy markets.”

1. Oil infrastructure is a major flash point in the Iraq crisis. After a week-long siege, Sunni extremists from the Islamic State in Iraq and Syria, known as ISIS, fought their way into Iraq’s largest oil refinery in the northern city of Baiji on Tuesday and Wednesday. There are conflicting reports about how much of the facility was seized by the militants in the ensuing chaos, and whether Iraqi forces have in fact repelled the attack, as Iraqi military officials claim. Previously, repeated attacks shut down the major Turkey-bound Kirkuk-Ceyhan pipeline in the north. 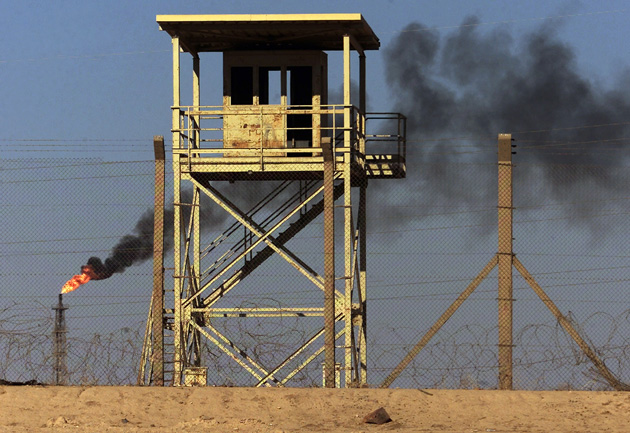 A 2003 photo shows a guard tower outside the Baiji oil refinery. Ivan Sekretarev/AP

2. The Iraq crisis is already affecting oil and gasoline prices. Since the 2003 invasion of Iraq, the country has steadily increased its oil production. It’s now the second biggest producer of crude oil in OPEC, exerting a growing influence on the global price of oil. And while the White House said Wednesday that there have been no “major disruptions in oil supplies in Iraq,” the crisis has clearly spooked the global market. Bloomberg reported last week that one international benchmark used by traders surged above $114 a barrel for the first time in nine months.

USA Today reported that even before the battle over the Baiji refinery, Iraq’s oil production had already fallen by about 10 percent, or 300,000 barrels a day, since March. The China National Petroleum Corporation, the giant state-run company that is the biggest foreign investor in Iraq’s oil industry, is now nervously watching for any threats to its $4 billion worth of oil interests.

And there are signs that oil market worries are already being reflected at your local gas station.

“I warned people on my Facebook, friends and family,” says Robert Rapier, an energy analyst and regular columnist for the Wall Street Journal. “I said: If you need to get gasoline, go get it now, because gasoline prices will be going up this week.”

3. But long-term impacts on global oil supply are unlikely, unless the insurgency spreads. For now, the insurgency is limited to the part of the country north of Baghdad. Unless there’s an increased threat of instability in the south, deeper and longer-lasting seismic shocks to the world energy market are unlikely, according to Luay al-Khatteeb, an energy and politics analyst with the Brookings Doha Center and a senior adviser to the Iraqi parliament. While Baiji is the country’s largest refinery, the overwhelming bulk of oil production in Iraq is centered around the city of Basra, in the country’s south, “far from the fault lines,” he said. Khatteeb called the recent oil price increases “baseless,” adding that “there is zero threat whatsoever to oil production.”

But if the conflict does spread south, the effect on oil markets could be severe. “If all Iraq’s production got taken off line, for example, I’m pretty sure you’d see oil prices [rise] very quickly to $120, $130, maybe even higher,” Rapier said.

Moreover, the battle for the Baiji plant is likely to make the situation in Iraq worse because Baiji mainly refines oil for the domestic market. “The lack of oil products is likely to further the misery and discontent and my prediction is that a lot of that will be directed toward the central government,” said James F. Jeffery, a visiting fellow at the Washington Institute for Near East Policy and a former US envoy to Baghdad, as reported by the Wall Street Journal. 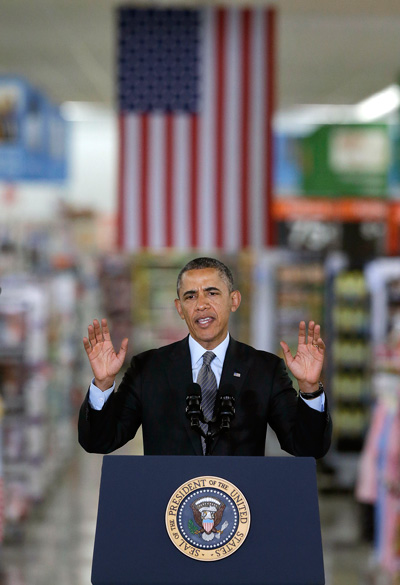 President Barack Obama speaks about energy security and his climate plan at a Walmart in Mountain View, California. Jeff Chiu/AP

4. America imports much less Iraqi oil than it used to. When Barack Obama ran for president in 2008, he said that America’s dependence on the “tyranny of oil” helped fund terrorism in both Iraq and around the world. “One of the most dangerous weapons in the world today is the price of oil,” he said. “We ship nearly $700 million a day to unstable or hostile nations for their oil. It pays for terrorist bombs going off from Baghdad to Beirut.” His opponent that year, John McCain, said at a town hall that his plan to “eliminate our dependence on oil from the Middle East” would “prevent us from having ever to send our young men and women into conflict again in the Middle East.”

As president, Obama has continued to emphasize independence from foreign oil. “Today, America is closer to energy independence than we have been in decades,” he told an audience at Walmart in Mountain View, California, last month. “And for the first time in nearly 20 years, America produces more oil here at home than we buy from other countries.”

Indeed, in October, domestic crude oil production surpassed imports for the first time since 1995. More specifically, even though Iraq’s oil production has increased, the US now imports far less Iraqi oil than it did around the time of the 2003 invasion.

That’s not just the story in Iraq. America is now importing less oil overall—20 percent less, in fact—than in 2003. “We’re getting more of that oil domestically,” Rapier said, pointing to increased local production facilitated by the fracking boom, especially in Texas and North Dakota.

And America’s own neighbors are also chipping in to help, says Rapier, pointing to Canadian crude. “We’ve got lower cost production in our neighborhood here.”

This means the United States is now somewhat insulated from big shocks to the market like the 1970s oil crisis, in which oil-producing Arab states imposed a crippling embargo against the US.

“The increase of unconventional oil supplies from new emerging assets in the US, all of this has created some sort of a comfort zone,” said Khatteeb from the Brookings Doha Center.

John Duffield, who authored a 2008 book called Over a Barrel: The Costs of US Foreign Oil Dependence agrees: “I would say we are not as much over the barrel.”

5. But the United States is still tied to global oil markets, and that means what happens in Iraq can have an economic impact here. One thing every expert I spoke to agreed on is this: Even with decreasing oil imports, the US is inextricably linked to world markets. That means that if the situation in Iraq continues to deteriorate, the US economy may not be immune.

“The cost to the United States of a big oil shock…will be lower than they were [in the past],” Duffield said. “Our main vulnerability is not so much the direct impact on oil, but the impact on the rest of the world’s economy, if there’s a big oil supply disruption.” He added that “as long as the world oil market is pretty highly integrated, the US is vulnerable to an oil supply disruption in the Middle East or the Persian Gulf, regardless of the amount of oil it imports from the region.”

Why? Because even though the United States has reduced its use of Middle Eastern oil, many of America’s key trading partners have not. “The oil production in Iraq has risen for seven years in a row,” Rapier said, and that oil is going somewhere. Much of it’s going to Asian economic powerhouses whose economies are deeply tied to our own. 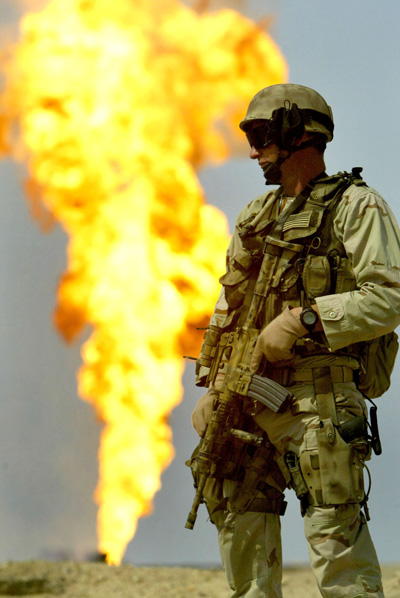 A US soldier stands guard at a burning oil well at the Rumeila oil fields after the 2003 American invasion. Ian Waldie/Pool/AP

“The United States, strategically, is a major trading power,” said Anthony Cordesman, an energy analyst with the Center for Strategic and International Studies. “It is particularly dependent on the import of manufactured goods from three countries which are extremely dependent on energy imports. Those happen to be China, South Korea, and Japan.”

That’s why Middle Eastern oil still plays an important role in US policy, says Cordesman. “It is precisely because US security is global. It is not a matter of direct US dependence [on foreign oil],” he said. “Because what really counts is global prices, and what counts is the steady and predictable flow of oil to a global economy.?”