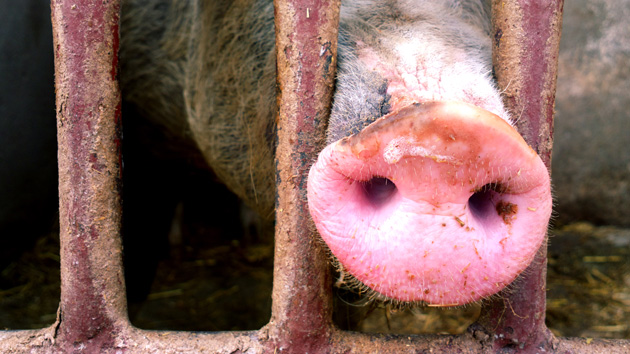 From the stage in a packed, noisy auditorium in Fairfield, Iowa, Richard Middleton peers theatrically into the crowd. “I know we’ve got some of you folks here,” he calls. “And I just wanted to know if any of you have the courage to raise your hand and say hello.”

The audience hoots and whistles as Middleton, a waggish, middle-aged attorney from Savannah, Georgia, pauses for effect. He’s looking for a lawyer for the agribusiness giant Cargill who’s been seen taking notes at his events. But tonight, no infiltrators come forward. Middleton shakes his head. “Not a damn one! Let me tell you something, folks: All I wanted to do was see if you’d accept service on a lawsuit. Because we’re coming!” The crowd goes wild.

Middleton has traveled to Iowa to speak with potential clients: people who say that living next to massive hog farms is ruining their lives. Over the past decade, Middleton and fellow lawyer Charlie Speer have made a name for themselves by taking on some of the meat industry’s biggest players and winning big damages for their clients. They do it by zeroing in on the industry’s Achilles’ heel: stink.

To date, the pair has filed cases against milk, meat, and egg producers in nine states, and they have won at least $32 million in jury awards, plus millions more in settlements. Last summer, they began filing suits on behalf of more than 4,000 North Carolina plaintiffs who live near farms raising hogs for Smithfield Foods, the world’s largest pork producer. In Iowa, the nation’s top pork-producing state, they’ve signed up more than 500 clients.

America’s livestock produce about 500 million tons of manure each year—roughly three times more than the country’s human population. On hog farms, that waste is typically held in euphemistically named “lagoons” or underground pits and then sprayed onto cropland or injected into the soil. The Environmental Protection Agency (EPA) does not regulate manure odor, nor do most states. Many do specify how close hog farms may be to homes, but Middleton and Speer argue that those rules don’t protect people from the powerful stench that can deprive them of their right to use and enjoy their own property.

To give me a sense of just what that means, Deb Chance, a Middleton and Speer client in Batavia, Iowa, shows me her calendar for late 2013. She says her house, a log cabin with a red metal roof, was overrun with the raunchy, rotten-egg smell of hog manure for days at a time. September 9, her birthday: “Hog smell all day.” November 1: “Worst hog smell yet!” December 25: “Merry fuckin hog smell Christmas!”

Chance spent 14 years improving her land with her husband. Their daughter picked a spot where she planned to one day build her own house. But everything changed when one of the 12 neighboring hog operations reached full capacity last fall. Now there are days when all the family can do is come inside, slam the door, and cry.

“Their intent is to destroy modern livestock production. Oh, and make millions in the process.”

“It’s like being held prisoner,” says Elsie Herring, a Middleton and Speer client from Wallace, North Carolina, who has been dealing with hog stench for years. The odor means her family can no longer enjoy sitting on the porch, having cookouts, or even hanging laundry on the line. “We were here before the pork industry even came in here, so what about our rights?” she asks. “It’s as if we have none.”

Odor nuisance suits are nothing new. In 1610, William Aldred, a Virginia colonist, successfully sued his neighbor for “erecting a hogstye so near the house of the plaintiff that the air thereof was corrupted.” Speer carries a copy of jurist Sir Edward Coke’s report of the court’s decision in his briefcase.

Yet Middleton and Speer’s legal approach has some new twists. They don’t seek injunctions, only monetary damages. They’ll file repeated nuisance suits against farms that don’t clean up their act: Some clients have successfully sued the same operation three times. And they go after not only local operations, but also the deep pockets at the top of the food chain—the big companies that contract with the farmers.

To agribusiness companies, that makes Middleton and Speer ambulance chasers and carpetbaggers. Don Butler, a spokesman for the Smithfield subsidiary Murphy-Brown, told me, “Their intent is to destroy modern livestock production. Period. Oh, and by the way, make millions in the process.” (Middleton and Speer take cases on a contingency basis—if they prevail, they get paid.)

Middleton has a long history as a plaintiff’s lawyer—he got his start in asbestos litigation. But Speer used to be on the other side, defending landfill companies against environmental suits. That changed in 1996, when he represented a group of small farmers who complained that a massive hog operation was fouling their air and water. That case didn’t sit well with some of his firm’s corporate clients, so in 2000 he quit and teamed up with Middleton. “I’m a conservative guy, fighting for regular folks,” says Speer, a lifelong Republican. “This is about private-property rights.”

In 2010, Middleton and Speer won their largest jury award to date—$11.5 million for 15 neighbors of Missouri operations raising hogs for a Smithfield subsidiary. When the verdict was announced, the company threatened to leave the state. The following year, the state changed the law to limit repeat suits and cap damages in farm nuisance suits.

Since 2005, at least six other states have passed measures that could stymie stink suits. Some of the bills are similar to model legislation written by the American Legislative Exchange Council, the organization known for promoting pro-business bills drafted behind closed doors.

“If the government were doing its job, my firm wouldn’t exist,” Speer says.

Local communities in at least 16 states have also been stripped of their ability to impose rules on farms that are tougher than state guidelines. As for federal regulation, the EPA doesn’t even know where all of the nation’s 20,000 large, confined feedlots are located, never mind how much they may be polluting. “If the government were doing its job, my firm wouldn’t exist,” Speer says.

Speer acknowledges that stink lawsuits aren’t the ideal way to address air and water pollution from factory farms. But as long as the industry has a stranglehold on state legislatures, he explains, this strategy is one of the few things that works. “We can’t shame them and we can’t reason with them,” he says. “The only way to get their attention is to go after their profits.”