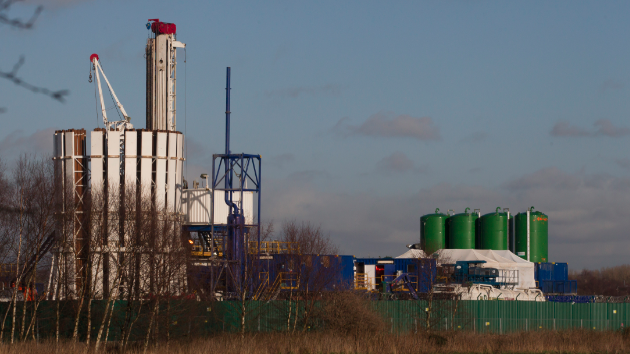 Capitol Hill on Tuesday was home to a rare sight: House Republicans preparing a bill they say will strengthen the authority of the Environmental Protection Agency.

But a coalition of public health experts, environmentalists, and state officials argue that the bill, called the Chemicals in Commerce Act, is a Trojan horse that would kneecap state rules on toxic chemicals across the country without giving the Environmental Protection Agency any authority to pick up the slack. Opponents of the Chemicals in Commerce Act warn that the bill would weaken oversight of fracking fluids in particular, as these are almost exclusively regulated by state agencies.

The bill, which is still a draft, is outwardly aimed at fixing the shortcomings of the Toxic Substances Control Act of 1976. In theory, TSCA gives the EPA the power to regulate any new chemical going on the market, from industrial flame-retardants to the plastic in child booster seats. But in practice, TSCA sets the bar for limiting chemicals so high that the EPA cannot even enforce a restriction it issued for asbestos—a substance so toxic it has its own disease named after it.

Almost all the most critical regulation of toxic chemicals, as a result, takes place at the state level. But the Chemicals in Commerce Act would prohibit states from enforcing those laws if the EPA has already taken action on the chemical in question—either by allowing the chemicals onto the market or by regulating them through TSCA.

This would leave close to zero restrictions in place on chemicals that have been proven dangerous. Because the EPA has such a short window in which to consider a new chemical, and limited resources to do so, it has been compelled to allow nearly 22,000 chemicals registered with the agency onto the market without first evaluating their safety. Since a federal court tossed out the EPA’s limit on asbestos in 1991, the agency hasn’t used TSCA to ban a single chemical. And in testimony on Tuesday, Jim Jones, the assistant administrator for EPA’s office of chemical safety, noted that when the agency has placed TSCA regulations on a chemical—in about 200 cases—these usually amount to no more than required testing.

“The bill is a step backward form the status quo, which was something that I didn’t think was possible.”

Ostensibly to help the EPA exercise oversight of chemicals, the bill would also establish a triage system the agency must use for all new chemicals. But it does not broaden TSCA so that EPA can act on high-priority chemicals. And states would be barred from regulating chemicals the EPA considers “low priority” or unlikely to cause harm even though they have not been proven safe.

“It’s a very sweeping rollback of state laws that leaves the EPA holding the bag—and the EPA, we’ve seen, can’t do anything on dangerous chemicals,” says Andy Igrejas, the director of Safer Chemicals, Healthy Families. “The bottom line is the bill is a step backward from the status quo, which was something that, even a year ago, I didn’t think was possible.”

The Chemicals in Commerce Act may come to a markup as early as May. (The bill is a loose companion to a Senate version that leaves state laws intact.) In the month since the draft bill began circulating, dozens of public health advocates, attorneys general in 13 states, and the bipartisan National Conference of State Legislators all voiced similar concerns to John Shimkus (R-Ill.), the chair of the House energy and commerce subcommittee where the bill will be introduced.

On Monday, Rep. Henry Waxman (D-Calif.) and Rep. Paul Tonko (D-NY) raised alarms about the bill’s potential to decimate state regulations for fracking. In the face of growing evidence that chemicals used in the fracking process can have deleterious effects on public health if misused, legislators and environmental agencies in 20 states have enacted rules requiring some disclosure of those chemicals to the public. Waxman and Tonko warned that the bill as written would gut those rules. In states such as Colorado and Ohio, they point out, those laws are necessary for doctors to be able to get information on chemicals when treating patients for illness related to hydraulic fracturing. The bill would also stop California, Illinois, Michigan, and Nevada from enacting disclosure laws still in the works.

The bill would nullify state laws that protect “vulnerable groups such as children and pregnant women.”

The attorneys general noted that the bill would void even some laws that don’t restrict the use of chemicals, but simply require companies to disclose which industrial chemicals they are using. Examples include a California “right to know” law, passed through a ballot initiative, which spurred toy manufacturers to reduce lead levels in children’s bouncy castles. In general, they warned, that the bill would nullify state laws that protect “vulnerable groups such as children and pregnant women.”

Chemicals that states banned or limited years before the EPA found ways to do so outside of TSCA—through the Clean Water Act or Clean Air Act—include toxic phthalate plasticizers found in children’s toys, formaldehyde emissions from composite wood, and the pesticide DDT, plus lead, cadmium, and mercury as used in certain products. Under current law, states are free to ban or limit the use of chemicals until the EPA issues a formal rule on that same chemical. At that point, in cases where the EPA only limited a chemical, a state may still go further and ban it.

Shimkus’s office did not return requests for comment. But proponents of the bill in the industrial sector have maintained throughout the past month that the bill strikes an appropriate balance between state regulations and federal ones. In a March hearing before the energy and commerce subcommittee, Roger Harris, the head of the National Association of Chemical Distributors, argued that the bill maintains states’ authority by allowing them to regulate chemicals “in instances where the EPA has not acted.” “If the US Environmental Protection Agency…has acted, it does not make sense to allow a state to take contradictory action,” he said.

In remarks to the committee on Tuesday, Cal Dooley, the president of the American Chemistry Council said the law “appropriately put[s] the EPA in the driver’s seat in the regulation of chemicals.”