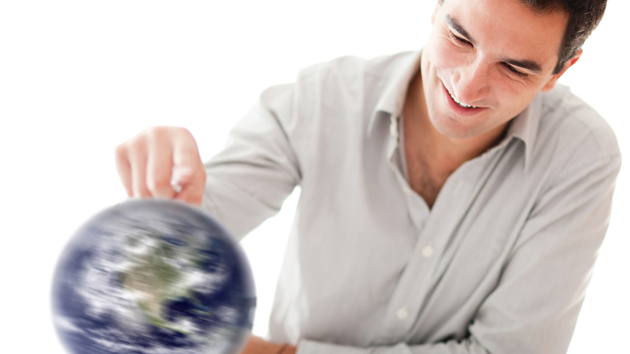 There are few things more symbolic of our climate dysfunction than the strange idea that if only we gave the problem a different name, we’d be able to deal with it. Nonetheless, for years there have been intimations that we should cease saying “global warming” and instead say “climate change”—albeit for wildly different reasons.

The case for this phrase change dates at least back to an infamous 2002 memo by conservative strategist Frank Luntz, who argued that “while global warming has catastrophic connotations attached to it, climate change suggests a more controllable and less emotional challenge.” Luntz was giving this advice in the context of also advising Republicans to highlight the “lack of scientific certainty” about climate change. In a study published in 2011, however, researchers at the University of Michigan actually found that Republicans seem to be more willing to accept the reality of the problem when the “climate change” label was used.

Most recently, however—and as Media Matters documents in the helpful video below—conservatives have seized on the bizarre idea that the environmental movement is now saying “climate change” because it can explain anything, including “decades of global cooling,” as one Fox News host claimed. In other words, the accusation is that this a sneaky way to cover up the reality that global warming is a sham.

Here at Climate Desk, we’ve used the terms pretty much interchangeably. So have scientists. From a scientific perspective, after all, both phrases have validity. There’s no doubt that the single clearest indicator of what carbon dioxide emissions are doing to our planet is a global warming trend. At the same time, though, this trend results in much more than just warming. From changes in rainfall patterns to potential jet stream alterations, the term “climate change” certainly captures a broader range of consequences. In fact, NASA argues, on this basis, that it’s the preferable term.

But which term should we use from a public opinion perspective? What’s the better frame? Riley Dunlap, a sociologist at Oklahoma State University who is currently serving as the Gallup scholar for the environment, has just published a comprehensive polling analysis suggesting that basically, it’s a wash. “The public responds to global warming and climate change in a similar fashion,” writes Dunlap. For instance: When you show people a list of environmental problems and ask if they personally worry about each one “a great deal, a fair amount, only a little, or not at all,” 34 percent say they worry a great deal about global warming, and 35 percent say the same about climate change.

The more pertinent issue, though, is whether ideological groups respond differently to different phrasings. Dunlap looked at that too. Breaking responses down by ideology, he found that only 16 percent of Republicans say they worry a great deal about “global warming”…and only 17 percent say the same for “climate change.” In the other three possible response categories—a fair amount, only a little, not at all—the results were also quite similar, as you can see in the table below. 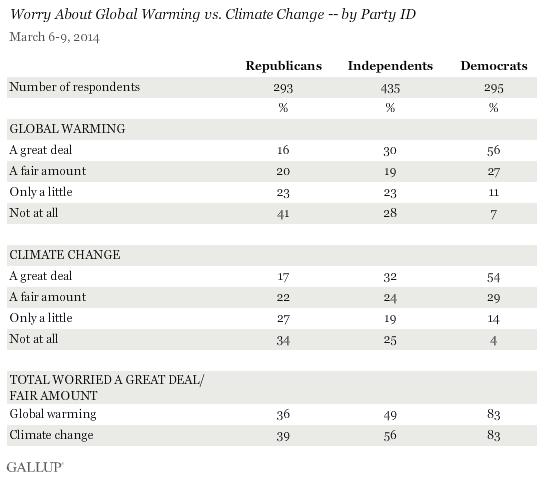 “While there are slight differences in the degree of partisan and ideological divergence in responses to global warming versus climate change,” Dunlap concludes in his paper, “they are not statistically significant, and modest compared with the huge gaps in views of both terms held by Americans at the two ends of the political spectrum.”

That’s not to say there wasn’t a time, perhaps as recently as mid-2009 (when the data were collected for the Michigan study cited above), when conservatives were indeed more open to taking the problem seriously if it was labeled “climate change” rather than “global warming.” But if so, those days are long gone. Dunlap suggests that this is because conservatives have gotten just as used to dismissing “climate change” as they are to dismissing “global warming.” Certainly, the name bestowed upon their favorite pseudo-scandal, late 2009’s “ClimateGate,” didn’t help matters.

Nor does the right’s cynical new idea that the climate crowd shifted to saying “climate change” in order to paper over a supposed lack of warming. “In recent years a popular meme on skeptic and conservative blogs is that climate scientists and climate policy advocates have shifted to climate change because it refers to abnormally cold as well as warm weather and is thus harder to dispute—even though climate scientists have used both terms from the late 1980s onward,” comments Dunlap by email. “The result is that in conservative circles climate change has become as politicized as global warming, and the two terms now seem synonymous.”

So, in sum: If you thought clever word-smithing was going to save the planet, forget about it. It doesn’t matter what you call it: It’s getting a lot hotter.