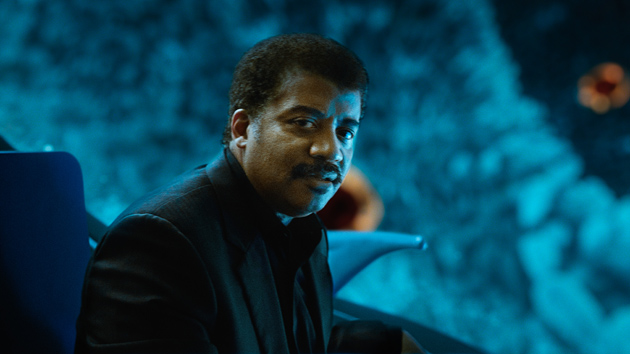 Last Sunday’s debut of Cosmos, the rebooted series from Fox and National Geographic, made television history. According to National Geographic, it was the largest global rollout of a TV series ever, appearing on 220 channels in 181 countries and 45 languages. And, yes, this is a science show we’re talking about. You will have to actively resist the force of gravity in order to lift up your dropped jaw and restore a sense of calm to your stunned face.

At the center of the show is the “heir apparent” to legendary science popularizer and original Cosmos host Carl Sagan: the impassioned astrophysicist Neil deGrasse Tyson, who appeared on this week’s episode of the Inquiring Minds podcast to talk about what it’s like to fill Sagan’s shoes (stream below). On the podcast, Tyson discussed topics ranging from what we know now about the cosmos that Sagan didn’t (top three answers: dark matter and dark energy, the profusion of discovered exoplanets, and the concept of parallel universes, or the “multiverse”) to why science seems to have gotten so supercool again. After all, not only has Cosmos garnered such a reach, but The Big Bang Theory is currently the No. 1 comedy on TV.

“I wake up every morning saying, ‘How did I get 1.7 million Twitter followers?'” Tyson joked while discussing science’s newfound popularity. “Should I remind them that I’m an astrophysicist? Maybe I should tell them, ‘Folks, I’m an astrophysicist. All right? Escape now.'”

Thanks in part to Cosmos, Tyson is arguably the single most visible public face of science in America today. And as such, he may have to walk a difficult line. Many science defenders want Cosmos to do nothing less than restore our national sanity by smiting all science denial, especially when it comes to the issues of evolution and global warming. It’s an impossible task, but the theme was nonetheless quite apparent at a November Library of Congress gala dedicating Carl Sagan’s papers, where Cosmos producer Seth MacFarlane denounced science’s “politicization on steroids,” and Cosmos writer Steven Soter remarked that Sagan would have been “appalled” by today’s attacks on climate scientists.

Carl Sagan himself often took strong stands on science-based political issues of the day. He clashed with the Reagan administration over arms control and the “Star Wars” program, and the debate over his ideas about “nuclear winter” served as a kind of preview of the current battle over global warming. Sagan also openly debated pseudoscientists like Immanuel Velikovsky, who posited that the planet Venus had started out as a comet ejected by Jupiter, and had caused various events described in the Bible on its way to its current position. Indeed, Sagan even took on Velikovsky in the fourth episode of the original Cosmos, explaining in depth why his ideas were wrong.

By contrast, Tyson made clear on Inquiring Minds that he does not plan to follow in Sagan’s footsteps in this respect (or for that matter, those of Bill Nye the Science Guy, who went straight into the creationists’ den to debate evolution last month, and was faulted by some for doing so). “Carl Sagan would debate people on all manner of issues,” said Tyson. “And I don’t have the time or the energy or the interest in doing so. As an educator, I’d rather just get people thinking straight in the first place, so I don’t have to then debate them later on.” (To be sure, Tyson has on occasion been drawn into such debates in the past.) 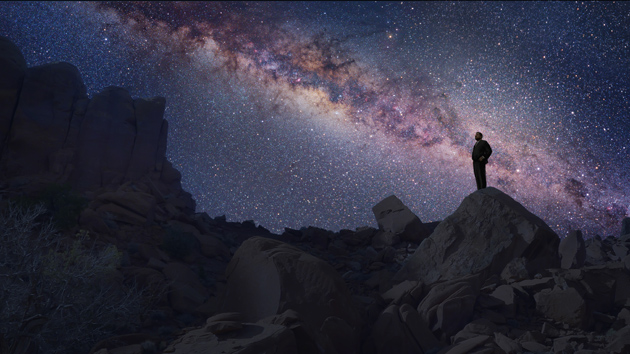 Neil Tyson and a universe Fox

The deniers, of course, are already out in force over the new Cosmos, whose first episode brought up both evolution and global warming, and whose future episodes will tackle human evolution in greater depth. At the creationist website Answers in Genesis, one writer even goes so far as to dispute the show’s treatment of the Big Bang, writing, “The big bang model is unable to explain many scientific observations, but this is of course not mentioned.”

Tyson certainly has plenty of criticism for those who would deny science. “I claim that all those who think they can cherry-pick science simply don’t understand how science works,” he explained on the podcast. “That’s what I claim. And if they did, they’d be less prone to just assert that somehow scientists are clueless.”

But at the same time, and unlike many science champions (such as the biologist Richard Dawkins), Tyson is quite careful not to pit science against religion. For instance, the first episode of the new Cosmos tells the story of Giordano Bruno, an Italian monk who was persecuted and ultimately burned at the stake by the Inquisition over his ideas about the universe, including the notion that there are an infinite number of suns and worlds beyond our own. Some have argued that to tell this story is in effect to pick a fight over science and religion, but Tyson counters that “Giordano Bruno himself was a deeply religious person. In fact, you could argue that he was more religious than the people prosecuting him.”

The stance of Cosmos, Tyson emphasizes, is not anti-religion but anti-dogma: “Any time you have a doctrine where that is the truth that you assert, and that what you call the truth is unassailable, you’ve got doctrine, you’ve got dogma on your hands. And so Cosmos is…an offering of science, and a reminder that dogma does not advance science; it actually regresses it.”

In other words, Tyson’s view appears to be that in an age rife with science denial, Cosmos rises above that fray by instilling in us wonder about the nature of the cosmos and our quest to understand it. And given the breathtaking quality and stunningly wide distribution of the show, there’s much to say for that approach. Every time you pick a fight, whether over climate change or over evolution or over religion, you lose some of the audience (even as you fire up another part of it). 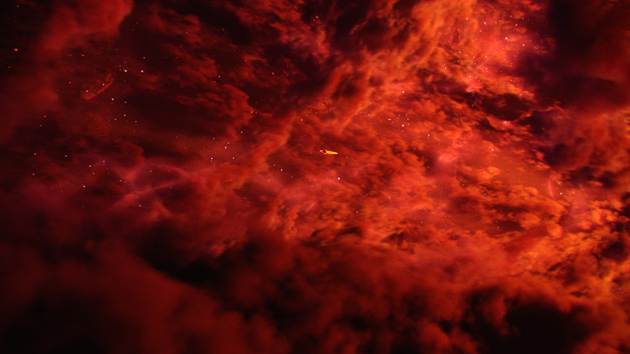 The “ship of the imagination” sails through the cosmos, on Cosmos. Fox.

In the end, however, scientific knowledge, and wanting to do something about the problems that science reveals, are inseparable. And as soon as you want to change something in the world because of science, you inevitably run up against interests, emotions, and denial.

Global warming is the case in point: Just as Carl Sagan worried about nuclear holocaust because of science, so we today worry about the planet’s steady warming. Indeed, that kind of thinking is central to the Cosmos legacy. Asked on the podcast about the warming of the planet, Tyson explained the ultimate message of Cosmos: “You are equipped and empowered with this cosmic perspective, achieved by the methods and tools of science, applied to the universe. And are you going to be a good shepherd, or a bad shepherd? Are you going to use your wisdom to protect civilization, or will you go at it in a shortsighted enough way to either destroy it, or be complicit in its destruction? If you can’t bring your scientific knowledge to bear on those kinds of decisions, then why even waste your time?”

So in the end, we should all thank Tyson—as well as Fox, National Geographic, and the show’s many writers and producers—for making the new Cosmos happen. It will contribute immeasurably to the appreciation of science in America and beyond. It will make kids think harder about pursuing science careers by showing them that the cosmos is intensely awesome, and the act of understanding it is downright heroic. But, can it ultimately stay above the political fray?

Maybe in some universes.

To listen to the full podcast interview with Neil deGrasse Tyson, you can stream below:

This episode of Inquiring Minds, a podcast hosted by neuroscientist and musician Indre Viskontas and best-selling author Chris Mooney, also features a discussion of whether bringing extinct species back to life is a good idea, and of new research suggesting that climate change contributed to the rise of Genghis Khan.