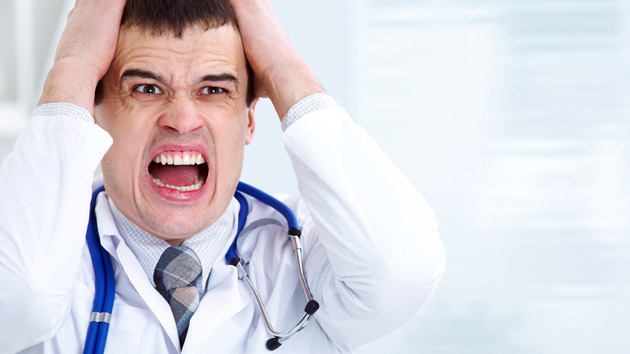 How do you become a scientist? Ask anyone in the profession and you’ll probably hear some version of the following: get a bachelor’s of science degree, work in a lab, get into a Ph.D. program, publish some papers, get a good postdoctoral position, publish some more papers, and then apply for a tenure-track job at a large university. It’s a long road—and you get to spend those 10 to 15 years as a poor graduate student or underpaid postdoc, while you watch your peers launch careers, start families, and contribute to their 401(k) plans.

And then comes the academic job market. According to Brandeis University biochemist Gregory Petsko, who recently chaired a National Academy of Sciences committee on the postdoctoral experience in the United States, less than 20 percent of aspiring postdocs today get highly coveted jobs in academia. That’s less than 1 in 5. Naturally, many more end up in industry, in government, and in many other sectors—but not the one they were trained for or probably hoping for. “We’re fond of saying that we should prepare people for alternative careers,” explains Pesko, “without realizing that we’re the alternative career.”

Ethan Perlstein was one of these postdocs—before he decided he’d had enough. He had gotten his Ph.D. at Harvard under Stuart Schreiber, the legendary chemist, and then gone on to a prestigious postdoctoral fellowship in genomics at Princeton. He’d published in top journals, like the Proceedings of the National Academy of Sciences and Genetics. He’d put in 13 years. But that “came to a close at the end of 2012,” says Perlstein on the latest episode of the Inquiring Minds podcast, “when I encountered what I have been calling the postdocalypse, which is this pretty bad job market for professionally trained Ph.Ds—life scientists, in particular.” After two years of searching for an assistant professorship, going up against an army of highly qualified, job-hungry scientists, he gave up.

But it wasn’t just the competition for jobs that deterred Perlstein. Once you land a tenure-track job, you often have to get a big government grant in order to actually get tenure. And those grants are becoming ever more competitive, meaning that young faculty members usually need to apply multiple times before securing one. That is, if they actually do get one before the university that employs them loses patience.

“I guess I just thought, ‘Well, I don’t want to keep waiting any more,'” recalls Perlstein. “At the time I was 33, and thought, ‘Well, I’m also seeing the statistic that says that the average age at which an independent biomedical research gets their first big grant from the NIH is 43 or 42.’ And I just thought, ‘Another 10 years of just waiting around for my turn in line?'”

You’ve probably heard the claim that the United States needs to produce more scientists, like Perlstein, to remain competitive with up-and-coming science powerhouses like India and China. It is a familiar litany whenever we hear laments about American science and its disturbing habit of resting on its laurels. But what you rarely hear in this argument is the fact that we don’t have nearly enough jobs to put to work the scientists we currently have. “U.S. higher education produces far more science and engineering graduates annually than there are S&E job openings,” writes Harvard researcher Michael Teitelbaum, “the only disagreement is whether it is 100 percent or 200 percent more.” 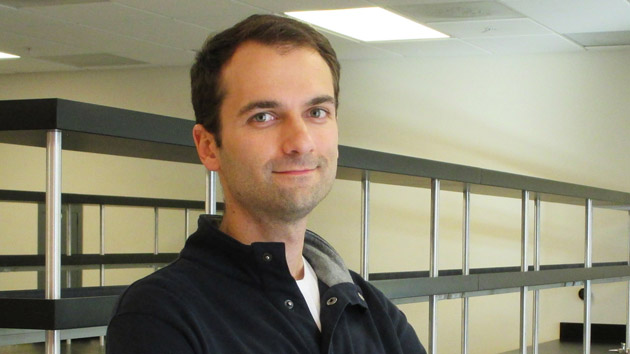 This situation is not new. Eight years ago, in 2006, George W. Bush’s National Institutes of Health director, Elias Zerhouni, lamented that by denying young scientists the opportunity to try out their ideas, we’re in effect “eat[ing] our seed corn,” likening the situation to farmers who fail to prepare for the future. And that was before budget fights and sequestration dealt a further blow to the science funding stream that heavily influences whether our country can provide opportunities for its talented young researchers.

The life sciences, the field in which Perlstein works, are a case in point—and arguably the most challenging arena of all. According to the National Science Foundation’s Survey of Doctorate Recipients, between the years 1993 and 2010, the number of US biomedical scientists with Ph.Ds rose from 105,000 to 180,000, even as the percentage employed in academia decreased from 58 percent to 51 percent, and the number holding tenured or tenure-track academic jobs decreased from 35 percent to 26 percent. That, in a nutshell, is the postdocalpyse. (Note that the vast majority of these Ph.Ds do find jobs somewhere, but fewer and fewer find the sort of academic jobs for which the postdoctoral experience is designed to train them.)

The ultimate cause? Funding. “Obama put out the latest 2015 budget for NIH—flat again. It’s been $30 billion ever since I basically entered grad school,” says Perlstein. “I was in college in the late ’90s, when the NIH budget was doubling. So I remember someone telling me for the first time, ‘They pay you to go to graduate school.'” The NIH itself recognizes that its own budget largely determines how many Ph.D. students in life sciences there are, because these students are supported by grants: training grants, fellowships, and research grants.

A doubling of the NIH budget from 1998 to 2003 created dramatic growth in the biomedical science field—positions, infrastructure, postdocs, and everything else. But that set many people up for a fall. As Science magazine reported in 2007, the doubling “provoked a massive expansion in biomedical research, and expectations of federal support surged to a level that could not be sustained when the budget stopped growing. The crash is hitting labs, careers, and the psyches of scientists with a vengeance.” How did that affect postdocs? You can see as much in this NIH figure, showing that as the agency’s budget doubled, the length of time spent as a postdoc decreased, but once the doubling ended, it shot up: 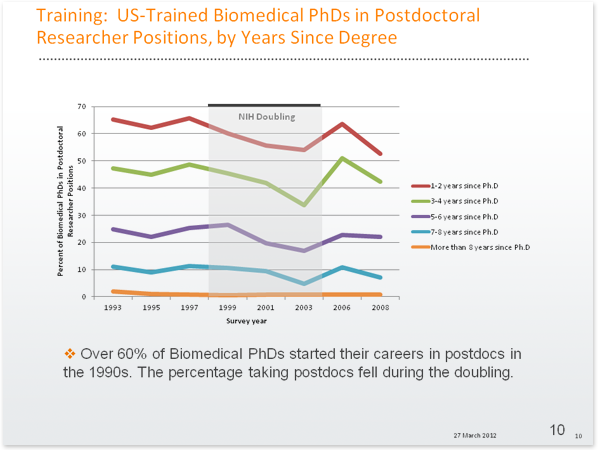 That’s right: The postdocalypse is partly the result of science funding policies put in place by our legislators, who love science until they don’t any more, who double budgets and then slow or freeze them.

So what do the more than 80 percent of postdocs who leave academia do? Some get jobs in industry, with large pharmaceutical companies or engineering firms. Some get MBAs or law degrees and use their scientific training to carve out a niche in a different industry. Some teach. Some write. Some few remain unemployed.

Perlstein did something radically different—something gutsy and surprising that has garnered him recent profiles in the Wall Street Journal and Science Careers. He decided to break from tradition and forge a new path: build, fund, and run his own independent science lab. To become an “indie scientist.” To in effect hack the scientific system, work within it yet outside of it, and support himself through crowdfunding, a compelling social-media presence, and, of course, good ideas.

He’s not just building a biotech startup or monetizing some scientific finding. He is using alternative revenue sources to fund basic research, hearkening back to the 19th century, when citizen-scientists usually had family money, a rich patron or a day job

Doing science outside of science these days is far from easy or simple. Just consider the fact that if you’re not part of a university, it is very hard to get your hands on the research papers that are the lifeblood of knowledge exchange. “I’m part of the paywalled 99 percent, the masses who don’t actually get access to all these great journals,” says Perlstein.

Then there’s the growing costs of technology, with most scientific endeavors relying on very expensive equipment. A university department might be able to purchase a multimillion-dollar MRI machine, for example. But it’s a lot harder for an independent scientist to make that investment.

But Perstein has figured out a way to make it work. His independent research focuses on so-called “orphan diseases,” which the FDA defines as conditions that afflict fewer than 200,000 people in the United States. The NIH estimates that there are more than 6,800 rare diseases, which in aggregate affect more than 25 million Americans. Perlstein’s focus on orphan diseases satisfies his passion for basic science—giving him the opportunity to make long-lasting contributions to our understanding of our bodies—while also having a clear application that makes the work fundable. You might think that biotech and pharmaceutical companies would have little incentive to develop drugs for these diseases because the market is small compared to ailments than affect millions of people, like diabetes or Alzheimer’s. But orphan diseases have other incentives for investors: premium drug pricing, protection from competition, and expedited development timelines.

And then, there are the rich patrons who want to see them cured. Perlstein now has to actively court them. Foundations or wealthy families with a stake in finding a rare-disease treatment are increasingly becoming important funders of research. Perhaps the best example is the Cystic Fibrosis Foundation, which committed $75 million dollars to the development of an innovative new CF treatment approved in 2012.

To do his work, Perlstein raises money through crowdfunding sites like Experiment.com, and rents his own lab space in a San Francisco incubator called QB3, which offers the “biotech equivalent of garages: small spaces for entrepreneurs to lay the foundations for companies that may spearhead new industries.” Organizations like QB3 are now partnering with major research universities to create innovation hubs. In these hubs, you can rent bench space or share costs of expensive equipment with other independent scientists or academics, without having to make multimillion-dollar investments yourself. This strategy reduces waste—not every lab needs an expensive MRI machine. If you can simply rent some time on a machine to meet your needs, science becomes much cheaper.

So is Perlstein an anomaly, or is he the new face of science? Maybe he’ll succeed as an indie scientist, and maybe he won’t. It’s hard not to cheer for him. But at the same time, perhaps the most resounding lesson is to lament a system that is forcing some of today’s best scientific minds out into the cold.

To listen to the full Inquiring Minds interview with Ethan Perlstein, you can stream below:

This episode of Inquiring Minds, a podcast hosted by neuroscientist and musician Indre Viskontas and best-selling author Chris Mooney, also features a story about the upcoming release of the UN Intergovernmental Panel on Climate Change’s report on global warming impacts, and a discussion about the difficult question of when screening for disease conditions is (and isn’t) a good idea.