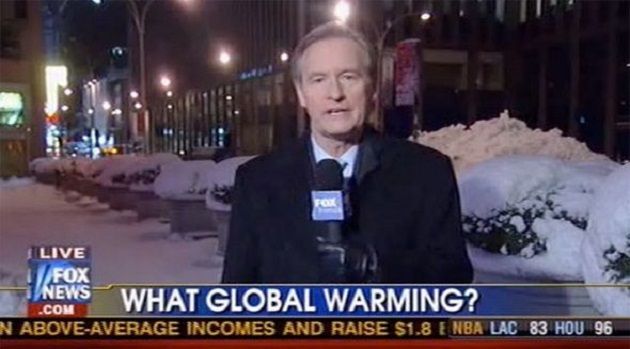 Perhaps there’s a weaker climate skeptic argument out there than this one, but I’m having a hard time thinking of it. (Maybe Rush Limbaugh’s claim that the left and the media made up the polar vortex?)

Here’s how off base the argument is: Only half the world is even experiencing winter right now. The other half is in summer, and it has been hot as blazes in Argentina and Australia lately. So how could the case for global warming rise or fall based on one week of one country’s weather? It’s global warming, after all, not American warming.

No wonder, then, that people like Donald Trump have been roundly pilloried for using snow and cold to discount science and statistics. But why is it that there seems to be this annual ritual, as MSNBC’s Chris Hayes put it, of conservative “snow trolling“? (For a snow trolling montage, see here.)

In another MSNBC segment with Ari Melber yesterday, The New Yorker‘s Hendrik Hertzberg and I tried to get at the answer to this question. We mainly talked about motivations: e.g., conservatives are driven to deny climate science out of allegiance to a set of values that broadly can be described as “individualistic.” They don’t want the government getting involved in the economy or in people’s lives in general. And that’s really a moral principle to them, one that drives their beliefs about the climate issue.

But if we’d had time to go a little bit deeper, I think there would have been something more to say about the right, the climate, and cold weather.

First off—and like it or not—cold weather influences people in general to discount global warming, just as hot weather motivates them to believe in it. Even though they shouldn’t be, people are basically weather vanes when it comes to their climate beliefs, at least on a short-term basis.

Such is the upshot of a number of psychological studies on the public and climate change. In one of them, published in the Journal of Politics in 2012, researchers used individual zip codes to examine the relationship between survey responses about climate change and the local weather just before those responses were given. The result was striking: “For each 3.1° Fahrenheit that local temperatures in the past week have risen above normal, Americans become one percentage point more likely to agree that there is ‘solid evidence’ that the earth is getting warmer,” the study found. And vice-versa: Cold weather anomalies were associated with decreased belief in global warming.

So we should expect weather phenomena, and especially very strong periods of heat or cold, to prompt visceral reactions about whether climate change is real or not. But with conservatives, there’s an added factor that I think is relevant: Not just their overarching doubts about climate change in general, but also their lack of trust in scientists.

There’s a lot of research on this, including documentation of an overall long-term decline in conservative trust in science, and evidence that watching Fox News is a contributing factor. Trust, note the authors of the latter paper, is a “heuristic” device that we use to quickly make up our minds about an issue in the absence of thorough, in-depth consideration. So if you trust scientists, you just go with whatever they say. If you don’t, you do the opposite.

Thus, perhaps conservative snow trolling is the combined result of the weather vane behavior of the public in general on this issue, and the fact that conservatives don’t see a need to check their snow-related outbursts, both because they’re skeptical of global warming anyway and also because they just don’t care that scientists will be annoyed. In other words, conservatives are willing to just come out and say what many people are thinking—or rather, feeling—during a cold spell.

And they do so, moreover, at a time when the public in general is quite susceptible to such misinformation. So you have to admit—grudgingly—that it’s a good strategy.

Both sides can play the game, though, and climate campaigners can expect to fare at least as well when it’s hot out. (It’s probably no coincidence that President Obama gave his July climate speech amid 90 degree temperatures.) Moreover, since the planet really is warming—a trend that, by definition, produces more overall warm anomalies than cold anomalies—the latter group will have more than enough opportunities.