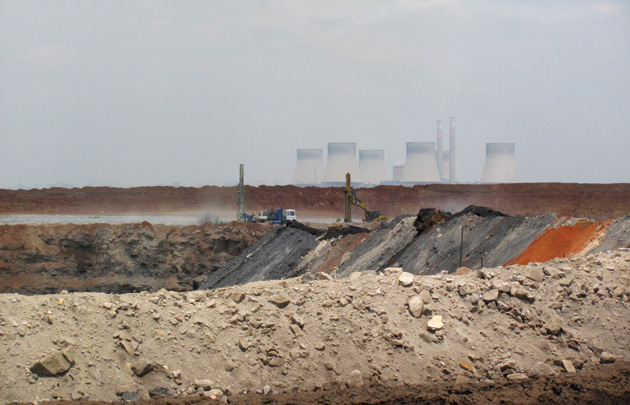 Much of South Africa's coal is mined and burned in Mpumalanga Province, where the Ex-Im Bank is financing a giant power plant.Photo: Kate Sheppard

Update: On Thursday, December 12, the Export-Import Bank announced that it will no longer fund coal projects abroad. The article below originally appeared in the March/April 2012 issue of Mother Jones.

An hour east of Johannesburg, industrial behemoths rise from the bucolic cornfields—massive cooling towers to the left, open-pit coal mines to the right. One of the pits sits just a few hundred yards away from the home of a 27-year-old woman who shares the wood-and-mud structure with her two kids and three siblings. The walls have been cracking ever since the miners started blasting two years ago, stripping off coal to feed the 11 power plants here in Mpumalanga Province. The South African utility Eskom says it will need dozens more mines like this one to keep the plants burning.

When the mine came in, says the woman, who’s afraid to give her name, “they promised jobs. They promised projects. But now, no jobs, no projects.” Maybe six people in her town have been hired to work in the mine, she says. The rest of them just got a giant hole in the ground.

Ninety-three percent of South Africa’s power comes from coal, and the industry keeps expanding. Today, along with Bobby Peek of the environmental group Groundwork, I’m looking to check out one of the biggest expansion projects yet, the site where Eskom is building the massive Kusile coal plant, which will ratchet up South Africa’s annual carbon emissions by 30 million metric tons. A big chunk of the up-front financing comes courtesy of US taxpayers: The Export-Import Bank, a federal agency that finances foreign business ventures using American products or services, is putting $805 million into the project.

In some cases, the bank seems to go directly against the Obama administration’s priorities.

The bank’s mission is to help create American jobs, and its carbon policy calls for it to be “a leader on [climate] issues whenever possible.” But its record on both jobs and CO2 is hard to assess because unlike most major public finance institutions (such as the World Bank), Ex-Im does not have an independent accountability mechanism to assess how it’s performing—let alone provide that information to the public. The bank does not keep track of jobs created by its projects; for example, the Kusile loan was designed to let Eskom hire Kansas-based engineering firm Black & Veatch, but tracking the results was left to Black & Veatch itself. The company says the loan has created 300 jobs, about half of them in the US. By contrast, just $573 million in financing to support Ohio-based First Solar’s exports to India and Canada created 550 jobs.

In some cases, the bank seems to go directly against the Obama administration’s priorities. In the United States, the administration has moved to tighten regulations on coal, and at the World Bank, it has been skeptical of big new coal projects: In 2010 the US refused to support a loan to build a 4,800-kilowatt plant in South Africa, citing concerns that it lacked “a plan to ensure there is no net increase in carbon emissions.” Yet only a year later, Ex-Im provided funding for the nearly identical Kusile plant. And just after its carbon policy was approved—in response to a lawsuit from environmentalists—the bank put $3 billion into an ExxonMobil gas project in Papua New Guinea that involves clearcutting nearly 7,000 acres of tropical forests.

To this day, fossil fuel investments make up the second-largest share of the bank’s portfolio. Of the $32 billion in financing provided last year, nearly a quarter—$7.2 billion—went to oil, gas, mining, or power generation. “It’s a total joke when you say you have a low-carbon policy and then one of the world’s largest coal plants comes to you and you fund it,” says Justin Guay, a DC representative with the Sierra Club.

When Peek and I tried to check out the Kusile project for ourselves, we didn’t get very far. Our minivan fell in with a stream of heavy construction vehicles turning off the highway, onto a dirt road that stretched toward six tall beams rising from a cornfield. But soon a guard stopped us, and a security official told us we couldn’t take pictures—even though the site is plainly visible from public roadways. The guards tried to confiscate my notebook. Then they followed us all the way back to the highway.