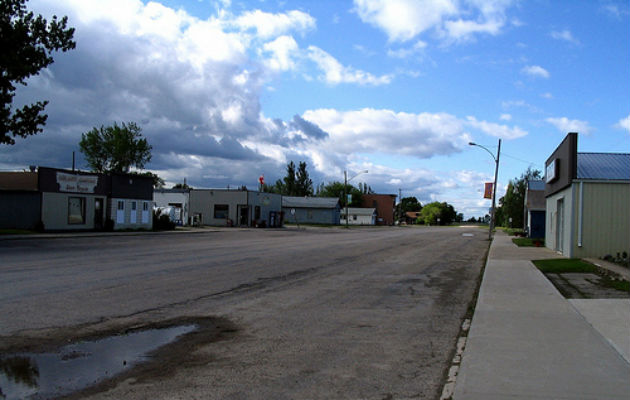 Williston is in the Bakken region of North Dakota, whose oil and gas reserves have attracted thousands of out-of-state oil workers. And Williston hasn’t even seen the worst of it. The police department in nearby Watford City received 41 service calls in 2006. In 2011 they received 3,938. That’s life in an energy boomtown.

“Policing the Patch,” a new study issued by the Department of Criminal Justice & Political Science at North Dakota State University, sheds new light on the problems faced in these boomtowns. Between October 2012 and March 2013, professor Carol A. Archbold and her team interviewed 101 law enforcement officers from eight agencies about how the in-migration of oil workers to the Bakken region has changed the way they do their jobs. The team’s findings tell us a lot about the problems created when cities and towns grow at an explosive rate.

The issues officers shared with Archbold ranged from a dramatic increase in alcohol-related violence (“Ninety percent of the problems we deal with involve alcohol,” one officer said), to an inability to balance emergency calls with proactive community policing (“I used to know people. I used to know their vehicles. I no longer know people or their vehicles,” said another officer.) Here are some of the biggest problems police shared with Archbold.

“It is difficult to be able to get around quickly and respond to calls because of the construction zones,” one officer told researchers. “It is also difficult to find where the addresses are for some calls. The maps in the city and the county keep changing monthly due to different oil camps being set up.”

“The issue with the man camps is they do not all label their housing appropriately. The oil companies are supposed to paint house numbers on them, but sometimes they don’t do this so I end up driving around for a while looking for an address. That can be challenging. “

Even in areas familiar to officers, “large oil and construction trucks congest the roadways, which results in longer response times for officers/deputies responding to calls.” Traffic accidents are on the rise as a result of congestion and alcohol use.

“There are calls where there should be two or three people responding, and only one person can show up. That means getting back-up to a serious call would take a long time due to traffic. That, of course, increases officer risk.”

“It is like an old antique box. The box is the city and they are trying to shove something in it that does not fit and that cannot support it.”

“The oil boom took many people from the agency. With staffing problems, it is hard to get time off. It is hard for the agency to compete with the big salaries offered by private business associated with the oil industry.”

“We need to be able to grow and hire more people. For instance, we just hired a batch of people. One person was on the job for a week and quit right away. We are hiring again next month. We just cannot keep people.”

“It has been difficult to hire and keep people. Turnover is outrageous. They give us no reason to stay. The last pay raise was not enough to compensate for the cost of living in the area.”

“We have lost many experienced people and have replaced them with people with no experience in law enforcement. Having more than five years of experience in this agency puts people high on the seniority ladder.”

A plurality of officers interviewed—43 percent—named high rent and the lack of affordable housing as the single biggest driver of problems in their towns.

“The housing shortage is a problem. For a while, many people were living in their cars around town. “

“The prices are way too high, both buying a home and renting a home. New deputies cannot afford an apartment. This affects our recruitment and retention. People are living in campers, cars, and tents. They live in close quarters, which results in problems, many domestic violence calls.”

“When new officers come to the area, they usually stay with other officers for a while and so that they can look for housing. If no housing becomes available, the officers start looking for jobs elsewhere.”

“There are either a few or no spots open in homeless shelters. Some churches help, but then their parking lots become packed with people living out of their cars.”

Nearly every issue listed above had an alcohol tie-in. Fights are worse and more prevalent as a result of alcohol consumption, as are domestic violence calls. One officer blamed alcohol for 90 percent of his calls, another officer said such incidents made up 80 percent of his.

“There are not enough women in this town and there is too much alcohol. Too many people here now. It is like putting five pounds of crap in a one-pound bag. There is too much drinking. Ninety percent of calls involves someone under the influence. I usually do not bother taking complaints or reports from drunks. I am too busy to waste my time with them.”

“Most calls involve the consumption or over-consumption of alcohol. We have had to kind of ratchet up our patrol concerning alcohol-related crimes, specifically with DUIs because there are more of them.”

“There are a lot of people and there is not a lot to do. That is when the trouble starts. There are lots of people in small spaces (like bars) and that doesn’t go over well.”

Officers had slightly fewer consistent feelings about who was to blame for all of these issues. Some talked about out-of-state oil workers as if their home states were lawless badlands, others argued that a lack of housing and infrastructure development is to blame. All of the officers were united in wanting more law enforcement personnel, better pay, better hours, and more modern equipment.