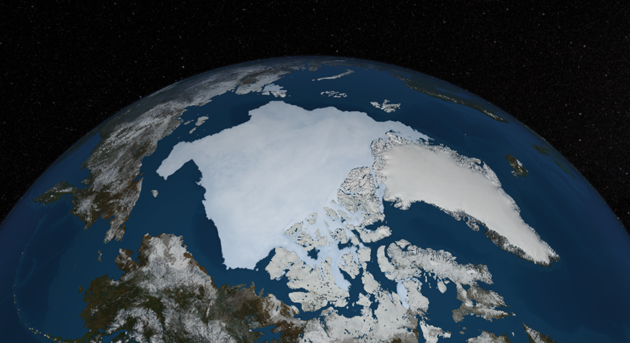 Appearing exhausted after a nearly two sleepless days fine-tuning the language of the report, co-chair Thomas Stocker called climate change “the greatest challenge of our time,” adding that “each of the last three decades has been successively warmer than the past,” and that this trend is likely to continue into the foreseeable future.

Pledging further action to cut carbon dioxide (CO2) emissions, U.S. Secretary of State John Kerry said, “This isn’t a run of the mill report to be dumped in a filing cabinet. This isn’t a political document produced by politicians… It’s science.”

And that science needs to be communicated to the public, loudly and clearly. I canvassed leading climate researchers for their take on the findings of the vastly influential IPCC report. What headline would they put on the news? What do they hope people hear about this report?

When I asked him for his headline, Michael Mann, the Director of the Earth Systems Science Center at Penn State (a former IPCC author himself) suggested: “Jury In: Climate Change Real, Caused by Us, and a Threat We Must Deal With.”

Ted Scambos, a glaciologist and head scientist of the National Snow and Ice Data Center (NSIDC) based in Boulder would lead with: “IPCC 2013, Similar Forecasts, Better Certainty.” While the report, which is issued every six to seven years, offers no radically new or alarming news, Scambos told me, it puts an exclamation point on what we already know, and refines our evolving understanding of global warming.

The IPCC, the indisputable rock star of UN documents, serves as the basis for global climate negotiations, like the ones that took place in Kyoto, Rio, and, more recently, Copenhagen. (The next big international climate meeting is scheduled for 2015 in Paris.) It is also arguably the most elaborately vetted and exhaustively researched scientific paper in existence. Founded in 1988 by the United Nations and the World Meteorological Organization, the IPCC represents the distilled wisdom of over 600 climate researchers in 32 countries on changes in the Earth’s atmosphere, ice and seas. It endeavors to answer the late New York mayor Ed Koch’s famous question “How am I doing?” for all of us. The answer, which won’t surprise anyone who has been following the climate change story, is not very well at all.

It is now 95 percent likely that human spewed heat-trapping gases—rather than natural variability—are the main cause of climate change, according to today’s report. In 2007 the IPCC’s confidence level was 90 percent, and in 2001 it was 66 percent, and just over 50 percent in 1995.

What’s more, things are getting worse more quickly than almost anyone thought would happen a few years back.

“If you look at the early IPCC predictions back from 1990 and what has taken place since, climate change is proceeding faster than we expected,” Mann told me by email. Mann helped develop the famous hockey-stick graph, which Al Gore used in his film “An Inconvenient Truth” to dramatize the sharp rise in temperatures in recent times.

Mann cites the decline of Arctic sea ice to explain: “Given the current trajectory, we’re on track for ice-free summer conditions in the Arctic in a matter of a decade or two… There is a similar story with the continental ice sheets, which are losing ice—and contributing to sea level rise—at a faster rate than the [earlier IPCC] models had predicted.”

But there is a lot that we still don’t understand. Reuters noted in a sneak preview of IPCC draft which was leaked in August that, while the broad global trends are clear, climate scientists were “finding it harder than expected to predict the impact in specific regions in coming decades.”

From year to year, the world’s hotspots are not consistent, but move erratically around the globe. The same has been true of heat waves, mega-storms and catastrophic floods, like the recent ones that ravaged the Colorado Front Range. There is broad agreement that climate change is increasing the severity of extreme weather events, but we’re not yet able to predict where and when these will show up.

“It is like watching a pot boil,” Danish astrophysicist and climate scientist Peter Thejll told me. “We understand why it boils but cannot predict where the next bubble will be.”

There is also uncertainty about an apparent slowdown over the last decade in the rate of air temperature increase. While some critics claim that global warming has “stalled,” others point out that, when rising ocean temperatures are factored in, the Earth is actually gaining heat faster than previously anticipated.

The point at which “humans lose control … may be sooner than expected.”

“Temperatures measured over the short term are just one parameter,” said Dr Tim Barnett of the Scripps Institute of Oceanography in an interview. “There are far more critical things going on; the acidification of the ocean is happening a lot faster than anybody thought that it would, it’s sucking up more CO2, plankton, the basic food chain of the planet, are dying, it’s such a hugely important signal. Why aren’t people using that as a measure of what is going on?”

Barnett thinks that recent increases in volcanic activity, which spews smog-forming aerosols into the air that deflect solar radiation and cool the atmosphere, might help account for the temporary slowing of global temperature rise. But he says we shouldn’t let short term fluctuations cause us to lose sight of the big picture.

The dispute over temperatures underscores just how formidable the IPCC’s task of modeling the complexity of climate change is. Issued in three parts (the next two installments are due out in the spring), the full version of the IPCC will end up several times the length of Leo Tolstoy’s epic War and Peace. Yet every last word of the U.N. document needs to be signed off on by all of the nations on earth.

“I do not know of any other area of any complexity and importance at all where there is unanimous agreement… and the statements so strong,” Mike MacCracken, Chief Scientist for Climate Change Programs, Climate Institute in Washington, D.C. told me in an email. “What IPCC has achieved is remarkable (and why it merited the Nobel Peace Prize granted in 2007).”

Not surprisingly, the IPCC”s conclusions tend to be “conservative by design,” Ken Caldeira, an atmospheric scientist with the Carnegie Institution’s Department of Global Ecology told me: “The IPCC is not supposed to represent the controversial forefront of climate science. It is supposed to represents what nearly all scientists agree on, and it does that quite effectively.”

Nevertheless, even these understated findings are inevitably controversial. Roger Pielke Jr., the Director of the Center for Science and Technology Policy Research at the University of Colorado, Boulder suggested a headline that focuses on the cat fight that today’s report is sure to revive: “Fresh Red Meat Offered Up in the Climate Debate, Activists and Skeptics Continue Fighting Over It.” Pielke should know. A critic of Al Gore, who has called his own detractors “climate McCarthyists,” Pielke has been a lightning rod for the political controversy which continues to swirl around the question of global warming, and what, if anything, we should do about it.

The public’s skepticism of climate change took a dive after Hurricane Sandy. Fifty-four percent of Americans are now saying that the effects of global warming have already begun. But 41 percent surveyed in the same Gallup poll believe news about global warming is generally exaggerated, and there is a smaller but highly passionate minority that continues to believe the whole thing is a hoax.

For most climate experts, however, the battle is long over—at least when it comes to the science. What remains in dispute is not whether climate change is happening, but how fast things are going to get worse.

There are some possibilities that are deliberately left out of the IPCC projections, because we simply don’t have enough data yet to model them. Jason Box, a visiting scholar at the Byrd Polar Research Center told me in an email interview that: “The scary elephant in the closet is terrestrial and oceanic methane release triggered by warming.” The IPCC projections don’t include the possibility—some scientists say likelihood—that huge quantities of methane (a greenhouse gas thirty times as potent as CO2) will eventually be released from thawing permafrost and undersea methane hydrate reserves. Box said that the threshhold “when humans lose control of potential management of the problem, may be sooner than expected.”

Box, whose work has been instrumental in documenting the rapid deterioration of the Greenland ice sheet, also believes that the latest IPCC predictions (of a maximum just under three foot ocean rise by the end of the century) may turn out to be wildly optimistic, if the Greenland ice sheet breaks up. “We are heading into uncharted territory” he said. “We are creating a different climate than the Earth has ever seen.”

The head of the IPCC, Rajendra Pachauri, speaks for the scientific consensus when he says that time is fast running out to avoid the catastrophic collapse of the natural systems on which human life depends. What he recently told a group of climate scientist could be the most chilling headline of all for the U.N. report:

“We have five minutes before midnight.”