This story and video first appeared on the Atlantic website and is reproduced here as part of the Climate Desk collaboration.

Crude oil is far from being one homogenous substance. Its physical characteristics differ depending on where in the world it’s pulled out of the ground, and those variations determine its usage and price.

The Energy Information Administration (EIA) puts it succinctly: “not all crude is created equal.” Some has a lot of sulphur, and it’s called sour. Oil with less sulphur is called sweet. Crudes also vary in how dense they are. Sweet, light crude is the most valuable type of oil. Sour, heavy oil fetches the lowest prices. Here’s why:

This is partly because gasoline and diesel fuel, which typically sell at a significant premium to residual fuel oil and other ‘bottom of the barrel’ products, can usually be more easily and cheaply produced using light, sweet crude oil. The light sweet grades are desirable because they can be processed with far less sophisticated and energy-intensive processes/refineries.” (EIA)

Depending on these characteristics, crude ends up at different refineries:

Refining capacity in the Gulf Coast has large secondary conversion capacity including hydrocrackers, cokers, and desulfurization units. These units enable the processing of heavy, high sulfur (sour) crude oils like Mexican Maya that typically sell at a discount to light, low sulfur (sweet) crudes like Brent and Louisiana Light Sweet. Many East Coast refineries have less secondary conversion capacity, and in general they process crude oil with lower sulfur content and a lighter density. (EIA)* 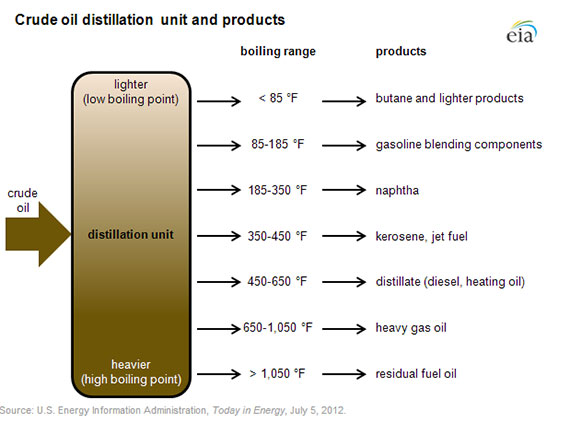 The refining process itself—fractional distillation, followed by further reprocessing and blending—is how we extract from crude to create the different petro-products that we use:

Crude oil is made up of a mixture of hydrocarbons, and the distillation process aims to separate this crude oil into broad categories of its component hydrocarbons, or ‘fractions.’ Crude oil is first heated and then put into a distillation column, also known as a still, where different products boil off and are recovered at different temperatures. Lighter products, such as butane and other liquid petroleum gases (LPG), gasoline blending components, and naphtha, are recovered at the lowest temperatures. Mid-range products include jet fuel, kerosene, and distillates (such as home heating oil and diesel fuel). The heaviest products such as residual fuel oil are recovered at temperatures sometimes over 1,000 degrees Fahrenheit. (EIA)*

That’s the rough overview of how crude gets from the ground to the gas station. In recent years, new extraction methods have made more crude available.

Due to controversial techniques pioneered in the natural gas industry and high oil prices providing incentives for oil companies, more oil is being extracted from previously unviable fields. Estimates of US proven reserves have risen as a result:

In 2011, oil and gas exploration and production companies operating in the United States added almost 3.8 billion barrels of crude oil and lease condensate proved reserves, an increase of 15 percent.” (EIA) 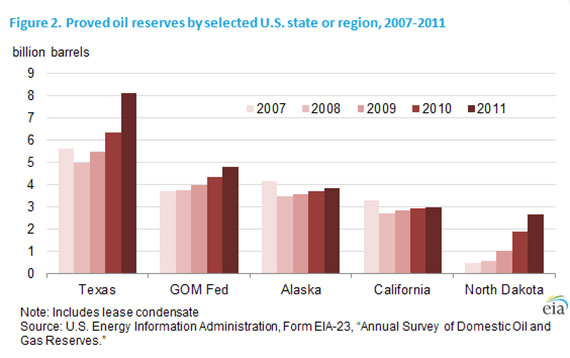 This has also led to a turn-around in US oil production, which, according to a report by the International Energy Agency (IEA), may even exceed Saudi Arabia within five years. Kevin Bullis at the MIT Technology Review summarizes some of the key figures:

Energy researcher Vaclav Smil suggests in The American that these developments should mean the end of “peak oil” anxieties:

Obviously, there will come a time when global oil extraction will reach its peak, but even that point may be of little practical interest as it could be followed by a prolonged, gentle decline or by an extended output plateau at a somewhat lower level than peak production.

But others like journalist Chris Nelder argue that we’ve increased spending on oil production by tremendous amounts only to see global oil production edge up a bit. Older, cheaper oil fields are declining, and their oil is being replaced by crude from far more expensive sources. Nelder made his numerical case to the Washington Post like this:

And Bryan Walsh at Time notes that, while expanded oil production will be good for the economy and the trade balance, it doesn’t mean the US will be insulated from global crude prices:

The one thing politicians most want is the one thing the US still won’t be: energy independent. That’s because no matter how much additional oil the US is able to pump in the years to come, the global oil market is just that—global. Oil is the ultimate fungible commodity, able to be shipped and piped around the world.

* For more in-depth explainers on the individual refining and secondary processes, the EIA article on the distillation technique contains more links.