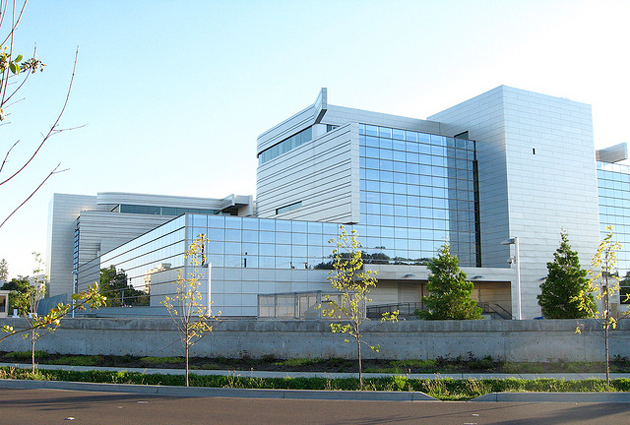 The amendments and executive orders never actually mention LEED by name. They ban new construction built with public money from seeking (or requiring) any green building certification that’s not recognized by something called the American National Standards Institute, or that doesn’t treat all certifications for wood products equally. But that’s really just a mouthful meant to ensure no more LEED-certified courthouses or state offices or libraries.

Behind the bans are a group of industries—primarily conventional timber, plastics and chemicals – unhappy that much of their product goes unrecognized by the LEED standard created by the US Green Building Council. LEED now certifies a million and a half square feet of real estate a day, affixing a “green” label onto public buildings, commercial offices and private homes that rack up points on a 100-point scale and rewards things like locally sourced materials and energy-efficient design.

Using lumber clear-cut from the side of a sensitive stream half a continent away does not, in short, get you anything.

“Certain things haven’t made the cut,” says Lane Burt, USGBC’s policy director. “As a result we’ve seen some political agitation, basically a much more threatening posture saying ‘if you don’t change this about LEED, or give us more points, we’ll use our constitutional rights to petition government to take LEED away.'”

Mississippi was the most recent state to do this, with an amendment just tacked on to a transportation and housing appropriations bill. Alabama and Georgia have done the same through executive order. An industry coalition is also trying to push similar language through Congress that would cover new construction from the largest property manager in the country, the federal government. (Treehugger has a good long-running history of all of this).

The industry objections have grown in direct proportion to LEED’s prominence. Thirty-four states, the District of Columbia and Puerto Rico have policies either requiring LEED construction or establishing strong incentives for it in public buildings. The federal government does, too. The industries that now oppose LEED—even as they remain members of the USGBC voting on changes to the certification—aren’t out to ban green building, per se. Rather, they’ve come up with their own standards for what counts as “green.”

Instead of LEED, they’ve got something called Green Globes. Instead of the “Forest Stewardship Council” certification (which LEED recognizes for wood products), they’ve created the Sustainable Forestry Initiative program. Suffice it to say, these certifications have laxer standards.

To environmental groups, the sleight-of-hand tactic is actually more insidious than if industry were trying to politicize green building all together.

“What they’re trying to do,” Sierra Club activist Jason Grant says of the timber industry, “is protect their core business model, which largely relies on large-scale clear cutting and replanting.” The Forest Stewardship Council demands costlier and more sustainable practices. “The conservation community is united in opposition to the Sustainable Forestry Initiative, not because it doesn’t have any merit, but because it is trying to pass off fundamentally status quo, barely legal forestry practices as green and sustainable. Look at the name—the Sustainable Forestry Initiative. That is what is at the heart of the conflict.”

LEED’s own defenders (including Grant) acknowledge that the system isn’t infallible. The entire exercise of rating green buildings is inevitably fraught; environmentalists themselves don’t agree on many items in the certification. The latest version of LEED passed this summer with 86 percent of the vote of the USGBC’s 13,000 members. That would count as a sweeping victory in a democracy. But if “consensus” means everybody, it obviously isn’t that.

The entire dispute over the forestry practices behind the lumber that goes into these buildings actually revolves around a single point in the 100-point LEED system. And a building receives that point if just half of its permanently installed wood is FSC certified. A LEED building can contain any kind of wood under the sun. It just may not get that point. (For comparison’s sake, if you use locally sourced but less sustainable wood, that counts toward two points.)

All of this means that one industry with a vested interest in the smallest sliver of an entire green-building rating system has so far been successful in undermining the whole model in a few states. And the standards set by government construction have the potential to cascade into the private market, too.

For LEED, this battle is a perverse sign of its expanding influence. But it’s unclear if the many proponents of green building—including all the businesses that have grown up around it—are ready yet to mount the kind of defense that could keep LEED from becoming another wedge between red states and blue ones.

“I think we are at an inflection point,” Burt says. “The green building industry has grown to 45 percent of the marketplace in new construction. That’s significant growth. It’s become a real industry. And if these political attacks from certain sub-components, certain special interests are going to continue, the green building industry needs to get a lot more politically savvy.”

He doesn’t mean that the non-profit USGBC needs to become a political heavyweight. “There’s no nonprofit,” he says, “that’s going to match the lobbying clout of the timber industry.”

The USGBC, he says, is content to compete with other certifications. But that’s not the scenario these state laws would create. Instead, they would effectively ban LEED. “That’s a huge escalation,” Burt says.