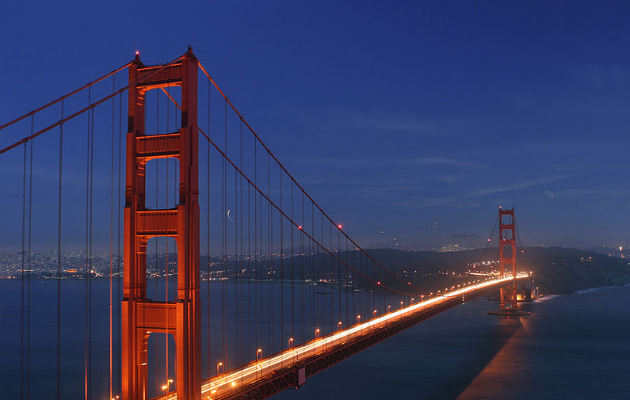 When California’s S.B. 375 was passed in 2008, there were many skeptics. The law aimed to get metropolitan regions around the state to cut greenhouse gas emissions through changes to development form and transportation. (If it were a country, California would rank somewhere between the world’s tenth and twelfth largest economy, so its effect could be significant.)

In 2011, the California Air Resources Board set GHG emissions reduction targets by metro region for passenger vehicles (passenger vehicles account for almost a third of GHGs in the state). Eighteen Metropolitan Planning Organizations were then to develop “sustainable community strategies,” wherein integrated transportation, housing, and community development, working together, could help achieve those specific objectives.

The idea was that smart, sustainable community design, coordinated with transportation systems that integrated walkability, bicycles, and next generation public transit, could really make a difference. It’s honestly much too soon to tell whether this will work. But here’s a quick look at three prominent metropolitan regions and their responses to this mandate. 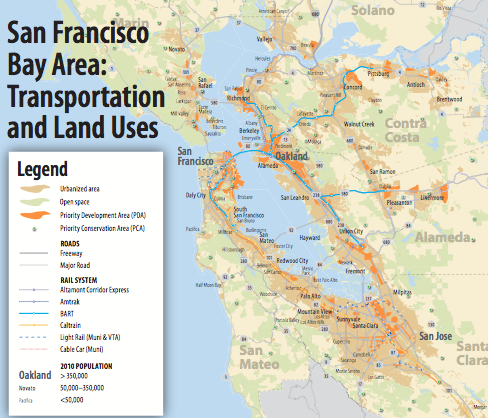 “Plan Bay Area” pledges to locate 80 percent of the area’s future housing needs within walking distance of transit, and by directing funding for and development of mixed-income housing in transit-oriented “priority development areas.” Keeping most development within the region’s existing municipal development footprints is one of the plan’s key attributes.

For the first time, the region’s transportation planning itself is much more tightly connected to its plans for development. According to the Plan Bay Area website:

The Bay Area’s target is to reduce per-capita carbon dioxide emissions from cars and light-duty trucks by 7 percent by 2020 and by 15 percent by 2035.

The transportation element promises to offer more transportation choices than just freeways. Plan Bay Area projects that this broader focus should be able to provide ready access to the many destinations of busy lives: schools, work, recreation, shopping, health care and everything in between. After sifting through requests for some 900 transportation projects (with an expected $277 billion available through 2025), and evaluating them against cost-effectiveness and tight connections to the overall plan, the region’s planners selected their top priorities.

Just the maintenance of the Bay area’s extensive system of roads, rail, ferry service, bike and pedestrian paths and trails will eat up a large proportion of the money. But at least $56 billion will be available for new projects that will help increase non-auto mode share by ten percent and decrease area-wide vehicle miles of travel, per capita, by an equal amount.

All in all, this is pretty impressive—if it really gets implemented. Indeed, on August 6, 2013, in the best of California traditions, a group of citizens concerned that the Plan will interfere with their right to sprawl (and represented by the conservative Pacific Legal Foundation), filed a lawsuit against it.

The Sacramento Area Council of Governments finished its own S.B. 375 strategy last summer.

The bold plan put a focus on so-called Transit Priority Areas where walking, biking and public transit are given a much higher level of priority for meeting daily mobility needs. It would encourage 38 percent of new homes and 39 percent of new jobs to locate in the transit priority areas, while new transit would serve more than 150,000 existing homes and more than 200,000 existing jobs.

The plan also accommodates an almost 40 percent increase in population (870,000 new residents) with an expansion of the area’s urban footprint of just seven percent—mostly protecting the valuable farmland outside existing urban areas by building up, or on smaller lots, inside; presumably, local planning and zoning would be changed to accommodate these objectives. This would be a reversal of the sprawling pattern of development that has gobbled up a lot of that mostly flat, open farm or ranch land over the past several decades.

On the housing and employment front, the plan would improve the ratio of jobs to households in almost all of the region’s employment centers. The more jobs attracted to an area with a plethora of housing (and vice versa), the theory goes, the less there is a need to travel between the two – and the lower the production of GHGs from vehicles. 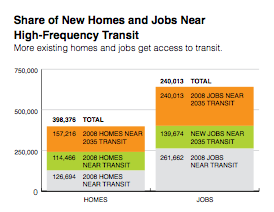 Experts estimate that all this rearranging of priorities would increase non-auto trips a third by doubling transit service and increasing bike lanes by more 77 percent. Expenditures for new roads would decrease, while expenditures for road/bridge maintenance and bike and transit projects would increase. It would literally reverse current commuting patterns by 2035 from today’s 60/20 percent (single occupant vehicle to transit usage ratio) to a 60/20 transit usage to single occupant vehicle ratio.

And yet… the plan’s not perfect. A 2012 analysis by the Natural Resources Defense Council noted some improvements that should be made, among them: getting density right earlier in the Plan period (say, by year-10) so that the massive new transit investments make sense; and, timing the construction of road projects later in the Plan period (say, more like year-25 or 30), and being especially careful to avoid projects that would simply increase road capacity at the fringe, so as not to trigger more sprawl

All in all, however, if realized, the Sacramento area plan could make a huge difference in sustainability outcomes for the region.

The San Diego metropolitan region was the first in the state to release its sustainability plan. But in this region, known for its unmitigated sprawl and conservative approach to local governance and public policy, sustainability is a significant challenge. And the reviews, so far, are mixed.

By the time SB 375 passed and the GHG reduction targets were issued by the state, San Diego was already in the midst of a multi-year transportation planning process. As a result, truly new land use and transportation analyses were limited. The sustainability plan it did produce increased funding for bicycle and/pedestrian projects (at a respectable $3.8 billion, it was three times that of its previous regional transportation plan). One example is that the plan recommends implementation of a 516-mile, interconnected bicycle network, which could cost upwards of $420 million. 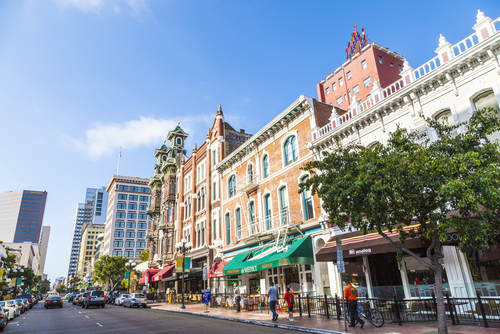 San Diego’s Gaslamp Quarter. This historic district on the National Register of Historic Places and dates back to 1867. Jorg Hackemann/Shutterstock

And by cancelling a two-lane proposed widening of part of the I-5 freeway, San Diego was able to make available some $800 million for public transit and regional efforts to achieve “smart growth” objectives. For example, the transportation plan provides for more than 150 new miles of light rail service and increased transit frequency in certain corridors, and its already existing (voluntary) “Regional Comprehensive Plan” would locate new higher-density, mixed-use development near transit, and focus new growth in already urbanized areas.

The plan achieved its 2035 GHG target of reducing emissions by 13 percent. However, it did so with a number of temporary, short-term measures, which created some backsliding to just a nine percent GHG reduction by 2050. This goes against the SB 375 premise of attaining permanent emissions reductions. Indeed, such reductions were impossible to maintain with the up-front highway expansions in the mix ($6 billion for road projects to 2020, $22 billion to 2050), the inevitably related sprawl, and transit not scheduled to come on line until the far side of the out-years.

A lawsuit followed the development of this Plan as well, although this one came from the progressive side, based on the inadequacy of the environmental impact review of the plan under California law. The MPO lost, and it has committed to improving its sustainability planning in the next go-round, with additional land use/transportation scenarios, a new “complete streets” policy, guidelines for the use of Transit-Oriented Development by area governments, and other components.

These changes will help, but the MPO should really accelerate its investments in transit, bike, and walkability infrastructure. It should also undertake more extensive transportation demand management programs and systems management upgrades to make the existing network work more efficiently; reduce the development of additional highway lanes or new connections that will just add capacity; work on improving the regional and statewide funding future for transit; and get land use right in terms of the programs, incentives and disincentives, and policies it can offer to member municipalities to adopt smart, sustainable land use plans and programs.

Some California regions have made good starts, others have a way to go. Lawsuits may proceed. And whether “plans” turn into “fruition” is still—and always—an open question.