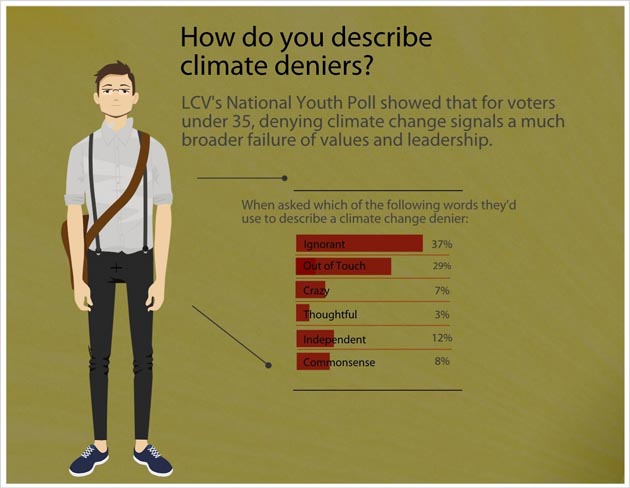 This story first appeared in the Guardian and is reproduced here as part of the Climate Desk collaboration.

Republicans in Congress who reject the science behind climate change could soon be reduced to political fossils, with new polling on Wednesday suggesting three-quarters of young voters find such views “ignorant, out of touch or crazy.”

The bipartisan poll conducted for the League of Conservation Voters found solid 80-percent support among under-35 voters for Barack Obama’s climate change plan—and majority support even among those who oppose the president.

On the flip side the poll found three-quarters of voters, or 73 percent, would oppose members of Congress who stood in the way of Obama’s climate action plan.

The findings could prove awkward for Republicans in Congress who have adopted climate contrarianism as a defining feature.

Some 55 percent of Republicans in the House of Representatives and 65 percent of those in the Senate reject the science behind climate change or oppose action on climate change, according to an analysis by the Centre for American Progress.

The house speaker, John Boehner, dismissed Obama’s plan to reduce carbon emissions as “absolutely crazy.” If the poll is right that would hurt Boehner even among members of his own party, with the poll finding 52 percent of young Republicans less inclined to support a candidate who opposed Obama on climate change.

The implications were even more harsh for those Republicans who block Obama on climate action and dispute the entire body of science behind climate change. “For voters under 35, denying climate change signals a much broader failure of values and leadership,” the polling memo said. Many young voters would write such candidates off completely, with 37 percent describing climate change deniers as “ignorant,” 29 percent as “out of touch” and 7 percent simply as “crazy.”

The climate cranks were unlikely to pick up many points with their base either; just under half of young Republicans said they would be less likely to vote for a climate change denier.

The poll, a joint effort by the Democratic firm Benenson Strategy Group and the Republican firm GS Strategy Group, could provide further evidence to a small group of moderate Republicans—mainly retired from politics—who have been trying to nudge the party to engage with the issue of climate change.

“As a Republican party strategist I believe that Republican candidates, Republican elected officials, need to find ways to demonstrate tolerance and understanding of what a young generation of voters need to see occurring,” said Greg Strimple of GS Strategy.

A few former Republican members of Congress—and an anonymous congressional aide—have publicly warned the party will lose voters, especially among the young, if it is seen as anti-science.

Obama, who has grown more high-profile about climate change in his second term, has played into those perceptions, calling out Republican climate cranks as “flat-earthers” in his climate speech last month.

At the moment there is no sign elected Republicans are eager for a climate makeover. At a Senate environment and public works hearing this week on climate change Republican Senators freely aired their personal doubts on established climate science and attacked Obama for failing to show “tolerance” to their alternative views.

In the house, meanwhile, Republicans were preparing bills to drastically reduce the powers and cut the budget by one-third of the Environmental Protection Agency—the main executor of Obama’s climate plan.

Outside Washington, however, Strimple said a rethink was under way. “I think there is a broad soul-searching going on with Republicans,” he said.