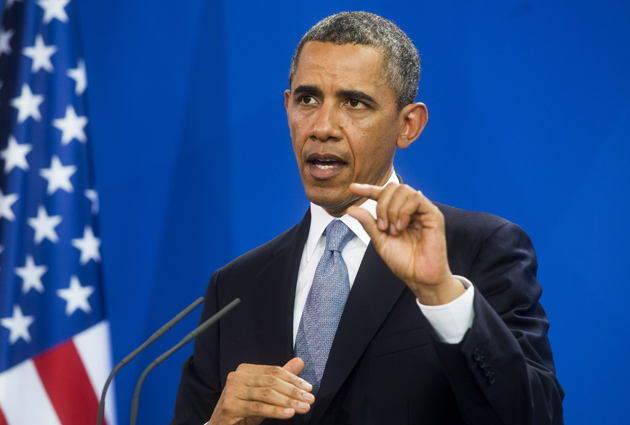 President Obama laid out a detailed plan to address the causes and impacts of climate change in a speech at Georgetown University on Tuesday. “I refuse to condemn your generation and future generations to a planet that’s beyond fixing,” he said.

A thread throughout Obama’s plan is the idea that addressing climate change is a “moral obligation” to our children. The two-page outline of the plan sent to reporters Monday evening came with the subhead “Taking Action for Our Kids,” and mentioned “kids” or “future generations” a total of four times. The theme carried throughout his speech on Tuesday. “Your children’s children will have to live with the consequences of our decisions,” he said.

Here are the key components of the plan aimed at reducing US emissions:

Obama said that the Keystone XL pipeline should only be approved if it “does not significantly exacerbate the problem of carbon pollution.”

The rules for existing power plants could be huge news, as old, dirty plants account for 40 percent of all emissions in the United States. But there are scant details on what exactly those rules will entail. The EPA has missed deadlines on emissions, and other important rules have been stuck at the Office of Information and Regulatory Affairs within the White House’s Office of Management and Budget for months.

While Obama did not explicitly endorse or reject the Keystone XL pipeline, a major issue for climate activists, he did state in the speech that the pipeline should only be approved if it “does not significantly exacerbate the problem of carbon pollution.” “The pipeline’s effect on climate will be absolutely critical to determining whether this project will go forward,” he said.

The draft environmental impact analysis the State Department released in March found that it wouldn’t dramatically increase emissions, prompting environmentalists to worry about what that means for the administration’s decision. The EPA, however, has said that State’s evaluation of the greenhouse gas impact of the pipeline isn’t good enough. A senior administration official told reporters on Monday night that the State Department is still awaiting a final environmental analysis. “This proposal is not yet ready for a decision,” the official reiterated.

Environmental groups rushed to respond to the plan, putting out largely complimentary statements. Maggie Fox, CEO of the Climate Reality Project, called it a “muscular plan” in a statement Tuesday morning.

What was perhaps most interesting about Obama’s climate plan is the weight it gave to not only mitigating carbon pollution, but also planning for and adapting to changes that are already underway. The plan notes that superstorms, record heat, asthma rates, and drought are already taking a toll. In 2012 alone, the plan notes, extreme weather caused $110 billion in damages.

“The planet will continue slowly warming for some time,” said Obama. “The seas will continue rising…It’s going to take some time for the climate to stabilize.”

The climate-adaptation portion of the plan does the following:

Obama had tough words for those who would deny that climate change is a problem. “I am willing to work with anybody…to combat this threat on behalf of our kids,” he said. “But I don’t have much patience for anybody who argues the problem is not real. We don’t have time for a meeting of the Flat-Earth Society.”

He also chastised Senate Republicans for holding up the nomination of Gina McCarthy to serve as the new EPA administrator, calling on them to confirm her “without any further obstruction or delay.”

The nearly 40-minute speech concluded with yet another appeal for future generations. “We may not live to see the full realization of our actions,” he said. “But we will have the satisfaction of realizing the world we leave for our children will be better off for what we do.”

And here’s a Google hangout briefing on the speech: