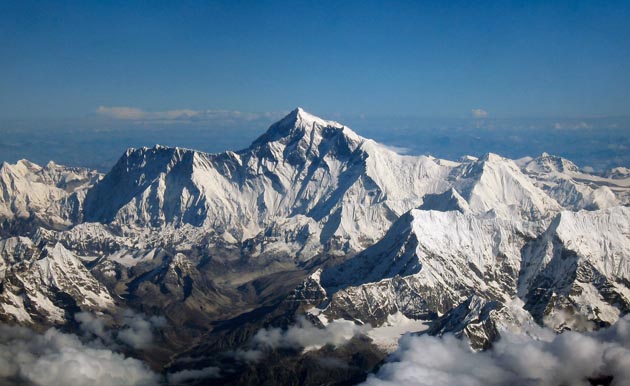 When Edmund Hillary and Tenzing Norgay reached the summit of Mount Everest 60 years ago Wednesday, the mountaineers gazed over a view from the top of the world that had never been seen before.

The view has changed since that historic day. Pollution and rising mountain temperatures are relentlessly shearing away at the Himalayas’ frozen façade. Photographs taken around the time of the 1953 expedition show hulking ridges of ice that have since shrunk or disappeared.

Glaciers and snow are melting throughout the sprawling mountain range, which stretches across India, Pakistan, Afghanistan, Bhutan, Nepal, and Tibetan China. The waning glaciers are leaving precarious mountainside lakes of cyan blue water in their wake.

So much of the ice has disappeared that climbers following in Hillary and Norgay’s footsteps this spring climbing season, including two octogenarians, are encountering rockier cliff faces that are less stable than the ice that was scaled by the mountain’s first conquerors.

“There is a big change compared to when I first climbed,” says Apa Sherpa, 53, a retired Nepalese mountain guide who scaled Mount Everest a record-setting 21 times from 1990 until 2011. He has lived in Utah since 2006 but still visits Nepal every spring or fall, where he participates in treks and climate campaigns.

He says the landscape changes can be clearly seen from the summit of Everest, which by most measures is the tallest mountain in the world. “It used to be more snow and ice, but now it’s more rock,” Sherpa said. “It’s very dangerous for climbing.”

Soot produced by stoves, power plants, brick kilns, and vehicles throughout the region is wafting up and across the Himalayas. The black carbon is settling on glaciers, which appears to be hastening their demise by absorbing heat from the sun.

Temperature increases are greatest in the Himalayas’ higher altitudes, but the most visible changes are occurring at the lower elevations. The mountain range’s white skirt is being hoisted, exposing rocks and hinting at the scale of global glacial losses.

A study published in Science this month used data from two NASA satellite projects to calculate that the world’s glaciers contain just 1 percent of the ice on the planet’s surface, but that between 2003 and 2009 glacial melting contributed 29 percent of the rise of the world’s seas. (Melting ice sheets in Greenland and Antarctica are contributing about the same amount to sea-level rise. The other 40 percent or so is the result of oceans expanding as they heat up and from groundwater that’s being pumped out and winding up in the seas.)

The decline in Himalayan glaciers is a threat to more than a billion people who live downstream. Rain that helps recharge the region’s rivers is scant during most of the year, falling mostly during the late summer monsoon season. Gradually melting glaciers keep the rivers flowing.

“The current trends of glacial melts suggest that the Ganga, Indus, Brahmaputra, and other rivers that crisscross the northern Indian plain could likely become seasonal rivers in the near future,” says Rajendra Pachauri, chair of the Intergovernmental Panel on Climate Change.

On Everest and in the surrounding Sagarmatha National Park, more than one-eighth of the glacial ice appears to have melted since the summit was first reached in 1953. That’s a preliminary finding from an analysis of historical satellite images and other data presented this month by Sudeep Thakuri, a Nepalese Ph.D. candidate at the University of Milan, at an American Geophysical Union meeting in Mexico.

The research reveals that glaciers on and around Everest have shrunk 13 percent since some of the earliest satellite images were taken 50 years ago. The mountain’s lowest bands of snow appear to have shifted 590 feet upward during the same period.

The Everest research is partly funded by the IPCC, which is trying to make amends for an embarrassing mistake. In 2010, the U.N. organization retracted a forecast that Himalayan glaciers could disappear by 2035. The IPCC said the forecast, made in its 2007 assessment report, was unfounded and based on an error.

The worldwide brouhaha that followed admission of the error highlighted the paucity of knowledge about climate change in the world’s greatest mountain range.

Few weather stations operate in the Himalayas, and most of the land is inaccessible to scientists, cleaved off from civilization by rugged peaks. There are few roads, and transportation across the mountain range by helicopter is dangerous and expensive, with few flat strips to land planes on.

Himalayan countries and nongovernmental organizations have started new measurement and research projects on glaciers throughout the Himalayas during the past few years.

Other researchers have been using data from the NASA satellites—the Gravity Recovery and Climate Experiment (GRACE), a two-satellite system started in 2002, and the Ice, Cloud, and land Elevation Satellite (ICESat), which was launched in 2003—to estimate changes in ice cover around the world, including in the Himalayas.

The satellite projects are providing scientists with more information than they could ever have hoped to have acquired by trekking out onto the glaciers to take measurements the old-fashioned way.

Tobias Bolch, a University of Zurich glaciologist who has conducted fieldwork in the Himalayas and who co-authored the Science paper, says most Himalayan glaciers, on average, “have certainly lost mass or retreated quite strongly” since the middle of the 19th century. What’s more, “there is an increasing trend of a glacial retreat in recent decades.”

Not all of the water is making it out to sea. Vast volumes are trapped in pits that were scoured out of the mountainsides as glaciers grew and crept downward. These pits are turning into lakebeds as the glaciers retreat.

Many of the glacial lakes are held in place by piles of gravel and boulders known as moraines that were bulldozed into place by the leading edge of the glaciers. The melt water is trapped behind the moraine, and the lake keeps growing as the glacier shrinks. “This is very unstable,” says Pradeep Mool, a geomorphologist at the Kathmandu, Nepal-based nonprofit International Centre for Integrated Mountain Development.

Such hazards became clear in 1977 when a glacial lake below the peak of Mt. Ama Dablam in eastern Nepal overtopped a moraine, triggering a flood that claimed three lives. Similar accidents have occurred since then, including another in Nepal in 1980 that destroyed villages more than 40 miles from the rupture.

An inventory published in 2011 by Mool and his colleagues identified 1,466 glacial lakes in Nepal alone. Several are deeper than 250 feet. Because of the rugged Himalayan terrain, it’s impossible or prohibitively expensive to drain the glacial lakes.

The flood hazards are prevalent throughout the mountain range. More than 150 glacial lakes have been identified in India, 16 of which were classified in 2010 as being potentially dangerous. The rupture of such lakes, perhaps triggered by an earthquake in the seismically active region, could be catastrophic.

Flash-flood risks ranked negligibly low among the manifold dangers faced 60 years ago by Hillary and Norgay. But villagers throughout the Himalayas now live in fear of being flooded by the remnants of the region’s vanishing ice and snow.