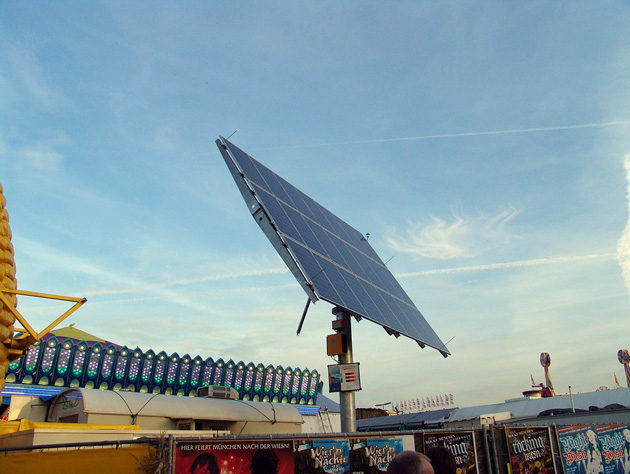 A solar panel in Munich, Germany. <a href="http://www.flickr.com/photos/joachim_s_mueller/1473059756/sizes/l/in/photostream/">Joachim S. Müller</a>/Flickr

It’s been a long, dark winter in Germany. In fact, there hasn’t been this little sun since people started tracking such things back in the early 1950s. Easter is around the corner, and the streets of Berlin are still covered in ice and snow. But spring will come, and when the snow finally melts, it will reveal the glossy black sheen of photovoltaic solar panels glinting from the North Sea to the Bavarian Alps.

Solar panels line Germany’s residential rooftops and top its low-slung barns. They sprout in orderly rows along train tracks and cover hills of coal mine tailings in what used to be East Germany. Old Soviet military bases, too polluted to use for anything else, have been turned into solar installations.

Twenty-two percent of Germany’s power is generated with renewables. Solar provides close to a quarter of that. The southern German state of Bavaria, population 12.5 million, has three photovoltaic panels per resident, which adds up to more installed solar capacity than in the entire United States.

With a long history of coal mining and heavy industry and the aforementioned winter gloom, Germany is not the country you’d naturally think of as a solar power. And yet a combination of canny regulation and widespread public support for renewables has made Germany an unlikely leader in the global green-power movement—and created a groundswell of small-scale power generation that could upend the dominance of traditional power companies.

Twenty years ago, it was clear solar power wasn’t going to get anywhere by itself. Photovoltaic panels were expensive and inefficient. Even solar systems designed to heat water, a far less technologically tricky task, were bad buys on the open market. Producing electricity from sunlight costs 10 times more than generating power using coal or nuclear energy. “The early systems might as well have been made out of gold,” says David Wedepohl, a spokesman for Germany’s Solar Industry Association.

In 1991, German politicians from across the political spectrum quietly passed the Erneuerbare Energien Gesetz (renewable energy law), or EEG. It was a little-heralded measure with long-lasting consequences.

The law guaranteed small hydroelectric power generators—mostly in Bavaria, a politically conservative area I like to think of as the Texas of Germany—a market for their electricity. The EEG required utility companies to plug all renewable power producers, down to the smallest rooftop solar panel, into the national grid and buy their power at a fixed, slightly above-market rate that guaranteed a modest return over the long term. The prices were supposed to balance out the hidden costs of conventional power, from pollution to decades of coal subsidies.

Investors began to approach solar and wind power as long-term investments, knowing there was a guaranteed future for renewable energy and a commitment to connecting it to the grid. Paperwork for renewables was streamlined—a big move in bureaucracy-loving Germany. The country invested billions in renewables research in the 1990s, and German reunification meant lots of money for energy development projects in the former East.

Now German companies lead the world in solar research and technology. The handful of companies that make inverters, the devices that reverse the flow of electricity and feed power from rooftop solar panels back into national grids, are almost all German. On a sunny day last May, Germany produced 22 gigawatts of energy from the sun—half of the world’s total and the equivalent of 20 nuclear power plants.

The “feed-in” laws and subsidies pushed innovation to the point where solar panels are cheap enough to compete on the open market in Germany and elsewhere. The price for solar panels has fallen 66 percent since 2006, and the cost of solar-generated power may be competitive with coal in a few years, according to a study by UBS. Already, solar projects are thriving in places like India and Italy despite a lack of government subsidies or support, and a recent Deutsche Bank report predicted “grid parity” in Bavaria by next year.

You might think Germany would be smug about all its solar success. But, as usual, folks here are full of doubts. Part of the reason solar panels are getting cheaper is competition from China, which is threatening to push more expensive German producers out of business. Last year, German conservatives tried to end solar subsidies entirely, arguing that plummeting prices were encouraging too many people to install solar panels. They said that the subsidies come at the expense of city dwellers without solar-ready roofs, low-income electricity consumers, and investments in other forms of renewable energy. Even environmentalists have begun to grumble about the solar boom, which sucks up half of Germany’s funding for renewables but provides just 20 percent of green power.

The proliferation of privately owned solar has large power companies in Germany worried. For two decades, they’ve been forced to facilitate and finance their competition, helping turn customers into producers. Soon, rooftop solar and other small-scale, locally owned renewables could upset the market for coal and nuclear power.

Here’s why that’s a problem: Renewable energy sources like wind and solar generate power intermittently, dependent on the sun or fickle breezes. Until researchers can find a way to store energy at a large scale, coal and nuclear plants—which can’t simply be switched on and off at will—must be kept running to guarantee a steady stream of electricity when the sun isn’t shining.

That means overproduction of power during daylight hours, as the country’s ample solar energy floods onto the grid along with electricity produced by power plants. Power companies traditionally charge more during the day, when offices are full and manufacturing plants are in full swing, so the glut of daytime solar power reduces their profit. The proliferation of solar panels on homes also takes high-margin residential customers off the grid at peak hours. And the energy surplus has driven prices for traditional coal and nuclear power down, even as renewables are still guaranteed more-than-competitive rates. As power companies try to pass the costs to consumers in the form of higher bills, that just encourages more people to put solar panels on their roofs.

Already, Germany’s power companies are closing power plants and scrapping plans for new ones. Germany had a national freak-out after the Fukushima disaster and decided to abolish nuclear power by 2023. Meanwhile, energy prices continue to sink, and solar installation continues to grow. By decentralizing power generation, the renewables boom could do to the power industry what the Internet did to the media: Put power in the hands of the little guy, and force power companies to rethink how they do business. As soon as the sun comes out, that is.