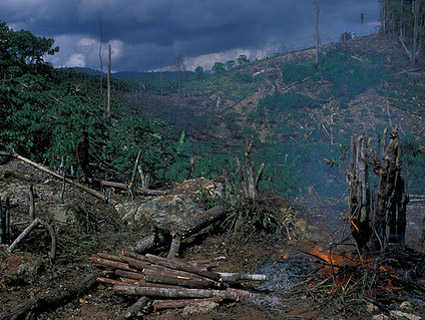 If you’ve ever bought toilet paper, a bucket of KFC chicken, or photocopy paper, there’s a decent chance that it came from Asia Pulp & Paper, the third largest paper producer in the world. There’s also a chance that that paper was made from the quickly disappearing Indonesian rainforest—which is why activists and environmental organizations have long labeled Asia Pulp & Paper a “forest criminal” for destroying this precious habitat. But Tuesday, APP and environmental activists came together to announce a new conservation policy that they say will stop the company’s destruction of virgin forests forever.

APP has pledged to develop plantations only on land that is not rainforest or land that has already been cleared—and on February 1, it halted its bulldozers in the pristine forests that are home to species like the Sumatran tiger and the orangutan. The company has also committed to consult with indigenous and local communities on any proposed new plantations. The Forest Trust, a non-profit that works with corporations to instate sustainable forest practices, will monitor the implementation of the new policy.

The agreement on third-party evaluation is significant, according to Scott Poynton, the executive director of the Forest Trust, which worked with APP to design the new policy. While the company has drawn criticism in the past for not living up to promised environmental changes, Poynton said that this new policy is much stronger than any previous pledges.

Arguably the trickiest part of all this is that the new policy applies not only to APP, but also to its business partners; as other corporations have found, controlling your whole supply chain can be difficult. But if it succeeds, the impact will be great: APP is a $6 billion company that produces 8.5 million tons of paper per year. The company and its suppliers control 6.4 million acres in Indonesia alone.

The Forest Trust, which began working with APP in February 2012, specializes in changing corporate giants from the inside. In 2010, it worked with Nestlé to get deforested products out of its supply chain. Poynton said the group’s strategy is to wait for companies to request help in devising sustainability plans. “We believe if we want to solve the problem we ought to work with the folks who are causing it,” he explained. Forest Trust has 50 staffers dedicated to ending deforestation in Indonesia, Poynton said, including experts in forestry, ecology, social science, and conflict resolution. Thirty of them have been working with APP to develop the new policy.

As Poynton was quick to point out, it was the campaigning from Greenpeace, Rainforest Action Network, and other environmental groups that pushed APP to the table in the first place. “This would never have happened without efforts of Greenpeace and other NGOS that campaigned against [APP],” he said. “But we also don’t think it could have happened without someone on the inside like us working with the company to figure out how to get there.”

Greenpeace has been campaigning against APP for years, exposing the company’s use of illegally logged trees and highlighting the ways in which its deforestation contributes to skyrocketing carbon emissions. Greenpeace and convinced more than 100 companies—including giants like Adidas, Kraft, Staples, and Nestlé—to stop doing business with APP. One of Greenpeace’s campaigns asked Barbie—a Mattel product—to “break up” with APP, which prompted the toy giant to stop sourcing paper from “controversial sources.”

“We don’t want any image of forest destruction or deforestation attached to us,” said an APP spokeswoman.

“I think APP is really seeing that pressure from the market,” said Bustar Maitar, the head of Greenpeace’s forest campaign in Indonesia. “There is no choice for them to keep their products in the international market. They have to do forest protection in Indonesia.”

Maitar is optimistic that the change could move the rest of the global paper and pulp market, too. “APP’s commitment will send a strong signal to the rest of the world to move on forest protection,” he said. “Otherwise they will lose their international market.”

Aida Greenbury, APP’s managing director of sustainability, told Mother Jones that the campaigns from Greenpeace and others didn’t directly hurt the company’s bottom line. But they did affect its reputation. “The loss we suffer mostly is linked to the image, the perception about APP,” said Greenbury. “If you want to be recognized as a true global leader, we don’t want any image of forest destruction or deforestation attached to us.”

Greenbury said that the commitment also reflects APP’s business interests. “Truthfully it’s not only about environmental and social sustainability, it’s also about economic sustainability as well,” she continued. “We need work with stakeholders not only in Indonesia but beyond, because we want to make sure that we don’t have a lost opportunity in the future to expand our market.”

While supportive of the announcement, Greenpeace’s Maitar conditioned his praise with the statement that Greenpeace will be monitoring APP’s success in putting its commitment into action. “For us this is the last opportunity of APP to make the commitment and implement it on the ground,” he said. “This is the golden opportunity for APP.”