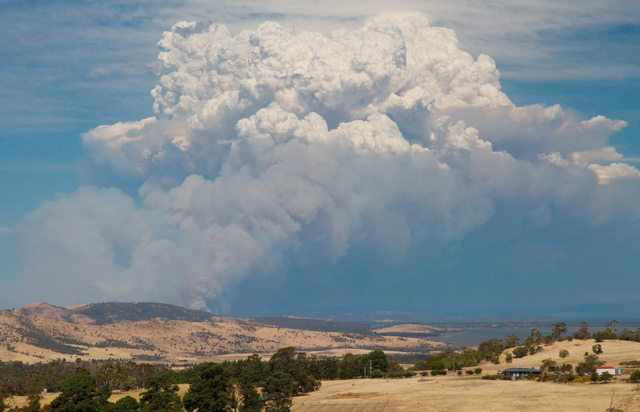 Every Australian knows well the smell of burning eucalyptus. As a kid, I remember filling bathtubs and hosing the house as embers flew overhead and the lawn turned grey with ash. The family photo albums practically lived for one month each summer in the back of the car.

So regular are fires across this big, dry place (the driest inhabited continent on earth) that they are given a season unto themselves—”bushfire season”—which kicks off in late December and continues through the height of summer, with predictable emergency broadcasts, panicked residents fleeing in cars, and the endless debate about evacuation plans and controlled burning.

It’s an old story, but one that scientists warn will become ever more common because of climate change.

Australia’s bushfire season hit with force last week, fueled by a record coast-to-coast heat wave that will continue unabated across the next few days. A new record was set Monday in Australia when the average maximum temperature reached 40.33 degrees Celsius (about 104.6 degrees Fahrenheit), beating the previous record set in 1972*: Yes, that’s an average maximum.

Blair Trewin, a senior climatologist with the National Climate Centre at the Australian Bureau of Meterology, says this heat wave covers a bigger area than did the deadly 2009 heat wave, which coincided with the “Black Saturday” bushfires in Victoria that killed 173 and destroyed over 3,500 structures. Last week, he said, 80 percent of the country recorded temperatures above normal for this time of year. The state of New South Wales is now facing its worst fire danger ever, according to state leaders. They are blanketing cellphones with warnings to get ready for the worst.

Sydney—Australia’s most populated city—is now waking up to what may be its hottest day on record in 150 years, up to 110 degrees, creating conditions that the premier of that state, Barry O’Farrell, said could be “the worst fire danger day this state has ever faced.” The threat is being met with “catastrophic” fire warnings that fires have the potential to cause significant loss of life and destroy many homes. Residents are being told to leave early from high-risk areas.

According to updates from the Sydney Morning Herald, more than 100 130 fires were burning across that state. Twenty-one Forty were uncontained. 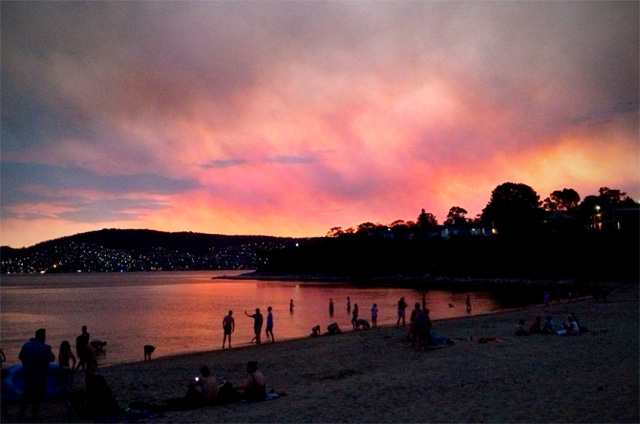 Trewin says this heat wave is being caused by what’s been dubbed the “dome of heat,” made worse by a delayed monsoon season which would have normally brought relief in the form of moisture by now. “At the peak of summer, the air mass over central Australia, left unstirred, is going to get very hot,” Trewin says. “Temperature is certainly a factor, but the thing with fire is strong winds and low humidity.” All three are combining right now to cause dangerous conditions centered around Australia’s populous South East.

Fires have already destroyed about 100 buildings in Tasmania, Australia’s southern island state known for its verdant wilderness, forcing thousands to flee their homes in cars and boats. Rescuers are now searching the wreckage for around 100 residents who remain unaccounted for, according to the Associated Press.

While that’s been said before in Australia in the context of bushfires, it’s significant this year because the prime minister’s carbon tax—which aims to avert the devastating effects of climate change by reducing the amount of carbon in the air—will feel the full brunt of a brutal election campaign against an opposition that vehemently opposes the tax.