Thanksgiving is supposed to be all about bounty, right? Cornucopias? Tables groaning with goodies?

Sure—for now. But (holiday buzzkill alert!) if the globe continues to warm, that Turkey Day spread could end up looking quite paltry. In honor of everyone’s favorite day of feasting, here’s a preview: 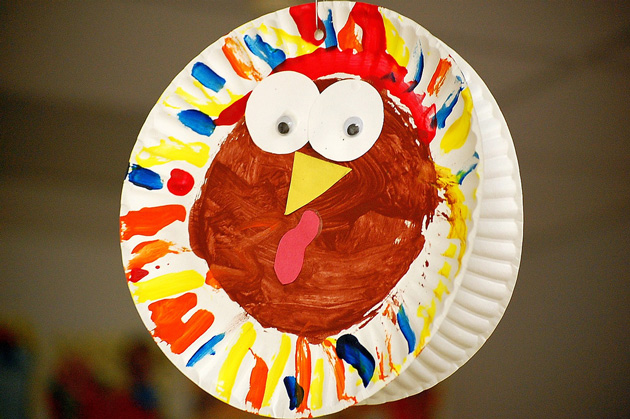 The “turkey belt” of the United States is in the South, where states like Virginia, North Carolina, and Arkansas contribute the bulk of our national annual haul of over a quarter of a billion birds. But if you’re worried about keeping turkey on your Thanksgiving table into the future, you might turn your attention to the Midwest. After this summer’s record-breaking heat and drought in the Corn Belt, the grain supplies that plump the birds up for market dwindled, prices spiked, and as of fall turkeys are the most expensive per pound they’ve been in 10 years.

That’s a problem for small turkey farmers like Anthony Miller, who runs Sunrise Farms in Stuarts Draft, Virginia. Miller’s customers faced a 60 percent increase in what they pay for a bird in the last couple years, which he blames directly on grain: “We have to pass the price along to our customers. We just hope people will be willing to pay for a good product.” The National Turkey Federation fears more frequent droughts, along with growing demand for corn ethanol, could make pricey birds the new normal.

If the sticker shock is too much, you can always take a cue from the Pilgrims and go hunt your own. But global warming could complicate that, too: The Audubon Society reported that rising temperatures have driven the natural range for wild turkeys 400 miles north in the last 40 years. And drought puts grub for wild birds at risk, too. “Farmers can mitigate climate change with their wallets,” Audubon scientist Gary Langham says. “Turkeys don’t have wallets, so they don’t have any options.” 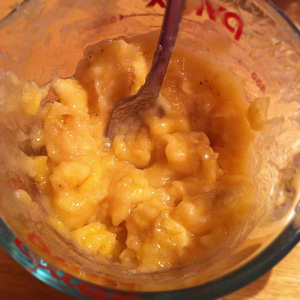 No halfway decent Thanksgiving plate is complete without a dollop of mashed potatoes and gravy. Unfortunately, rising temperatures are endangering the future of that creamy dish. Elevated spring temperatures in Idaho could produce an 18 percent drop in spud yields and an annual $141 million economic loss to the state, according to the American Security Project. Additionally, volatile rainfall will also create irrigation problems. Scientists also fear that the destructive potato tuber moth, which now frequents farms in Africa and New Zealand, could increase infestation in its usual hotspots and expand its range in North America, South America, and Europe.

But scientists and agriculturalists think they may have discovered a bright starchy alternative for warming potato regions in some parts of the globe: bananas. “It’s not necessarily a silver bullet,” Dr. Philip Thornton told BBC. “But there may be places where as temperatures increase, bananas might be one option that small-holders could start to look at.” Mashed bananas and gravy. Mmm. 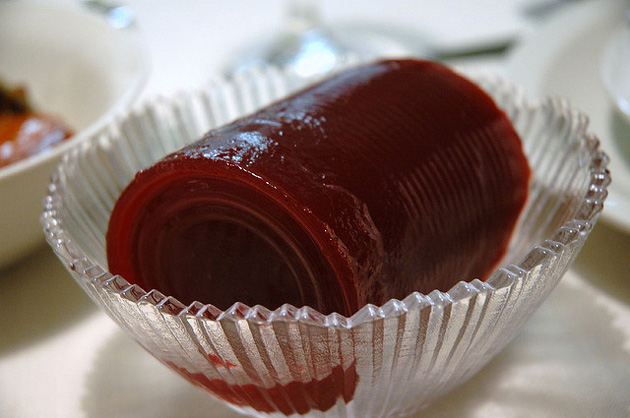 Then again, canned cranberry is probably good for another 100 years. LarimdaME/Flickr

When it comes to cranberries and climate change, location is everything. Take a look at Maine, where Charlie Armstrong, a “cranberry specialist” at the state university, says warmer weather is to thank for unusually abundant bogs this year. A jump in the average temperature by just a couple more degrees “could prove beneficial” for the state, he predicts, as a longer growing season can lead to more berries on each plant, and bigger berries, too.

But Maine isn’t actually a big player on the cranberry scene. Over in Wisconsin—where growers typically produce more cranberries than any other state—the cranberry is actually the official state fruit. Like most woody perennials, cranberry plants go dormant for part of the year, and Wisconsin’s typically bone-chilling winters are great for this important stage. Tod Planer, a coordinator with the Wisconsin State Cranberry Growers Association, says that during recent mild winters, berries have failed to freeze, forcing farmers to cover their crops in fresh water every few days to make sure oxygen reaches the plants. One Wisconsin farmer told Grow magazine that he saw his first cranberry blossom in mid-May this year, the earliest he’s ever witnessed. Mild weather in March spurred his plants into production, but then the cold returned and damaged the early vines, leaving the farmer to predict a major loss.

Balmy temperatures in winter also favor the cranberry fruitworm, whose population exploded to three times the normal size this year. The moth eats berries from the inside out, filling them with “frass” (a.k.a. moth poop), finally leaving behind a shriveled, inedible, and strangely blue carcass. 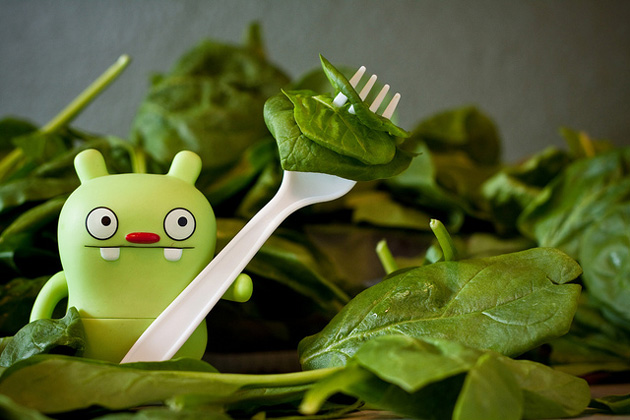 It’d be enough to make Popeye choke on that pipe: In 2009, newly anointed Secretary of Energy Steven Chu warned that rising temperatures and water shortages owed to climate change could eviscerate California’s “salad bowl”—the region responsible for producing half the nation’s fresh vegetables and two-thirds of its spinach—by the end of the century. “I don’t think the American public has gripped in its gut what could happen,” Chu told the Los Angeles Times then. “We’re looking at a scenario where there’s no more agriculture in California.”

NASA has been keeping tabs on California’s disappearing snow melt, a critical resource for the crops, while USDA researchers are racing to breed stoicism into the water-loving leafy greens. “Forecasts show that global warming over the next several decades will take place irrespective of any action taken today,” says Beiquan Mou, a plant geneticist working to engineer drought- and heat-resistant spinach and lettuce at the USDA.

Mou told Mother Jones by email that it takes 10 years to develop new breeds, but that becomes less feasible when crops are being starved of their genetic diversity—a situation in turn accelerated by climate change. His team, which has identified some heat and drought tolerant strains, expects to publish results of their tinkering by early 2014. Mou says the projects could benefit more than 200 regional greens producers and seed companies, but without steps to mitigate climate change, spinach could still disappear from future plates. “I would be sad to lose the spinach and egg soup,” he says. “It is my favorite.” 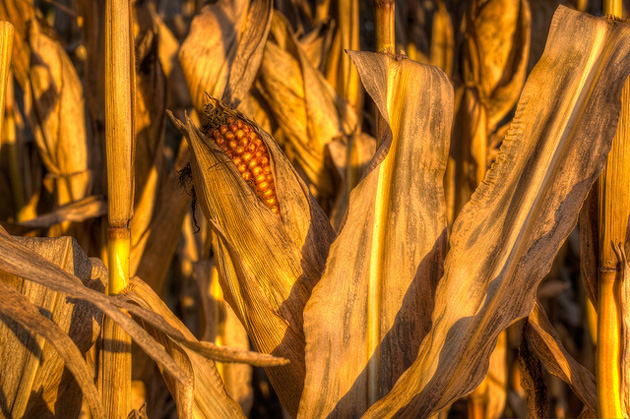 If corn bread, creamed corn, or creamy fried confetti corn are some of your Thanksgiving favorites, you ought to be pretty worried about climate change. A 2009 study predicted that in a worst-case global warming scenario, corn, cotton, and soy-bean yields could decrease by 80 percent by 2100 (best case is 30 percent). The drought the Midwest saw this summer was the worst in half a century, and the USDA predicts corn yield this year may plummet to around 122 bushels per acre—the lowest since 1995.

If the heartland falls through, corn production may move north to Canada. With rising temperatures, Canadian growing seasons have lengthened from anywhere between two weeks and four months in the past 50 years. Bloomberg reported that while farmers in Kansas sowed the fewest acres of corn in the past three years, corn acreage in Manitoba has nearly doubled over the past decade. 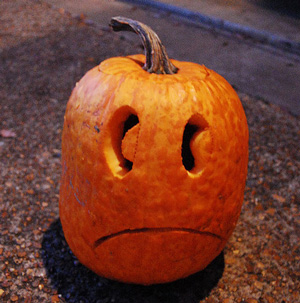 There hasn’t been much—if any—research on the effects of climate change on pumpkins. Still, evidence from the last few years suggests that pumpkins are sensitive to extreme weather. This year, pumpkins were one of the few crops that actually thrived during the drought. But back in 2009, an exceptionally rainy summer did a number on the crop, and the result was a canned pumpkin shortage that had Thanksgiving shoppers taking to eBay to procure the key ingredient for their pies.

We wanted the backstory, so we decided to ask the biggest canned-pumpkin company in America. Libby’s, owned by Nestlé, says it controls 80 percent of the canned-pumpkin market in the United States. Most of its pumpkins are grown within 50 miles of its company headquarters in Morton, Illinois, the self-proclaimed “Pumpkin Capital of the World.” Morton was hit hard by the rains of 2009. Nestlé spokeswoman Roz O’Hearn explained in an email:

In 2009, there was too much rain (2x historical rainfall) during the harvest. The fields were saturated, and our tractors were stuck. About 10 days before Thanksgiving that year, we ended the harvest and shipped all that we’d canned. We shared this information with consumers who rushed to the markets to stock up on pumpkin. So we experienced a shortage in 2009 which carried into 2010 at the start of the season.

Yikes. Given that experience, we wondered: As climate change brings more unpredictable weather, does Libby’s have a plan in place to ensure future pumpkin harvests? O’Hearn didn’t seem too worried:

The soil in the areas surrounding Morton is perfect for our pumpkin crop. That agricultural advantage is a key reason the pumpkin processing facility was located there 80 years ago. So yes, we continue to explore those aspects of production that we can manage, but we acknowledge Mother Nature is in control. Most of the time, she’s friendly!