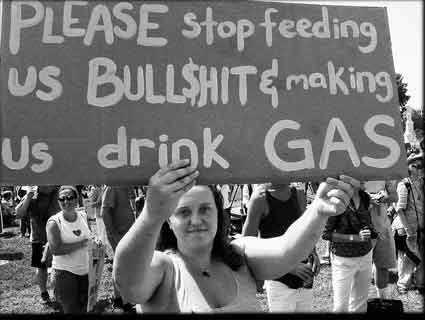 Gas is the new coal. At least that’s what the Obama administration seems to think. In accepting his nomination to run for a second term, President Obama pledged to “continue to reduce the carbon pollution that is heating our planet,” and to create 600,000 new jobs in the natural gas industry.

The two goals are directly related in the administration’s policies; in March 2012, the Obama EPA announced new emissions rules for power plants that meant no new coal plants will be built in the United States. All those coal plants will likely be replaced with gas-fired plants—a trend that was already in the works thanks to declining gas prices and increasing supply.

But Obama’s enthusiasm for gas puts the big, national environmental groups in a bit of a tough spot. While many recognize that burning gas to generate electricity emits 47 percent less greenhouse gas emissions than coal, concerns about environmental problems stemming from hydraulic fracturing have led many green groups to moderate their stance.

Take, for example, the Environmental Defense Fund. In late August, EDF announced a $6 million donation from Bloomberg Philanthropies, New York City Mayor Michael Bloomberg’s foundation, to work on fracking rules in 14 states. Multibillionaire Bloomberg is a gas booster, but he wants to ensure that it’s “done through strong, responsible regulation.” EDF agrees: “‘No drilling no place’ is not a strategy, that’s a bumper sticker,” Jim Marston, vice president of the energy program, told me a few days after the Bloomberg grant was announced.

In short, fracking is going to happen, so EDF might as well make it as safe as possible, Marston argued. “It’s probably not very good positioning for the environmental community to always be against everything all the time,” Marston said. “That doesn’t work politically.”

Other national green groups aren’t as pro-gas as EDF. Food and Water Watch swiftly blasted EDF as “sell-outs,” and the organization responded with a lengthy blog post reiterating its belief that tough rules can make the risks associated with gas “manageable.”

But the appropriate role of gas remains a sticky issue, particularly when it comes to state-level fights in places like New York, where Gov. Andrew Cuomo is weighing whether to lift a moratorium on fracking enacted in 2010. New Yorkers Against Fracking, along with many of the grassroots groups that have sprung up in the state, opposes gas extraction in the state, period. “There is no such thing as safe fracking,” says the group’s founder, ecologist and author Sandra Steingraber. “The only correct response is to maintain our moratorium and to not frack.” More than 100 communities have approved local bans or moratoria on fracking, in hopes of heading off a decision from the state.

Press reports disclosed that the Sierra Club had taken more than $26 million from natural gas interests to support its anti-coal work.

The Natural Resources Defense Council has hit some bumps on fracking in New York, too. NRDC argues that the United States should hold off on fracking until better oversight is in place. “We recognize that natural gas is a cleaner-burning fuel than other fossil fuels when you use it to make electricity,” said Kit Kennedy, an attorney with NRDC’s air and energy program. “But that’s no excuse for the unbridled excesses and impacts of the industry.” It’s a view NRDC has “evolved” on over the past five years or so, said Kennedy, in response to concerns coming from communities around the country.

But earlier this year, grassroots groups in New York blasted NRDC for its written comments on an environmental impact statement from the NY Department of Environmental Conservation that included alternatives to allowing drilling everywhere. The state hadn’t adequately considered alternatives like leaving “special places” such as the New York City watershed off limits for fracking, or allowing some demonstration projects to move forward so more testing could be done, NRDC’s attorneys wrote.

When the Cuomo administration later released a draft version of its decision it was pretty similar to the alternatives NRDC had suggested. In response, some of the local groups accused NRDC of writing the “blueprint” for a plan that would create “sacrifice zones” around the state.

“We said explicitly that we were not endorsing these alternatives, rather we were making a narrow legal point which is that the state is obligated to consider alternatives,” said NRDC attorney Kate Sinding. The group has spent a lot of time trying to make that clear to grassroots groups, she said.

Of all the green groups, Sierra Club has had the most public change of heart on gas. In February 2012, press reports disclosed that the environmental group had taken more than $26 million from natural gas interests to support its anti-coal work. It wasn’t that much of a surprise, perhaps. Former Sierra Club executive director Carl Pope had even spoken at events alongside the CEO of gas giant Chesapeake Energy Corp., declaring, “Among the fossil fuels, natural gas is at the top.”

The disclosure of the financial support put Sierra Club—the largest green group in the country at 1.4 million members—in an awkward position. The group’s new executive director, Michael Brune, responded with a blog post that same day clarifying a change in the club’s position on gas and stating that it was no longer taking gas money. While it previously believed gas “might play a necessary role” in the clean energy future, the club now concluded that the benefits of gas did not outweigh harms caused by extraction, and it was shifting its activism to ways the US could “use as little gas as possible” going forward. In May, Sierra Club announced that a new “Beyond Natural Gas” effort, modeled after its decade-old “Beyond Coal” campaign that has helped defeat 176 new power plants. (Bloomberg has also given $50 million to Sierra Club’s anti-coal work.)

“I think the Sierra Club’s done a full evolution on it,” said Deb Nardone, director of Beyond Natural Gas. “Natural gas isn’t a climate solution for us; it’s another dirty, dangerous fossil fuel.”

Sierra Club’s taken the most strident anti-gas position of the big greens in the wake of its change, but it’s still not as outspoken as the state-level groups would like to see. “We understand that you’re not going to be able to ban the use of hydraulic fracturing everywhere tomorrow, but we’re certainly clear that it’s not being done right,” Nardone said. Nor is its gas work nearly as big as the effort they’ve made on coal, which has 150 devoted staffers. Beyond Gas has just five.

New York will likely test relations between big greens and the local groups. A decision from the Cuomo administration is expected sometime soon (though the governor said Monday he’s in no rush). Critics have organized “Don’t Frack NY” protests ahead of the decision.

The local anti-gas groups want a more full-throated criticism—and resources—from the national groups. “We could use a big assist from the big greens,” Steingraber said. “They have the money, they have the capacity, and I don’t see that happening.”

Editors’ note: A response from the Environmental Defense Fund: “Readers should know that EDF believes there are places where natural gas development should never be allowed, and that we fully support the rights of local communities to regulate when and where this intensive industrial activity may take place. We are not ‘pro-gas.’ We are pro-safety. Natural gas is being developed whether any of us likes it or not. We have no choice but to fight for strong regulations in order to protect public health, communities and the environment.” —Eric Pooley, Senior Vice President, Environmental Defense Fund.