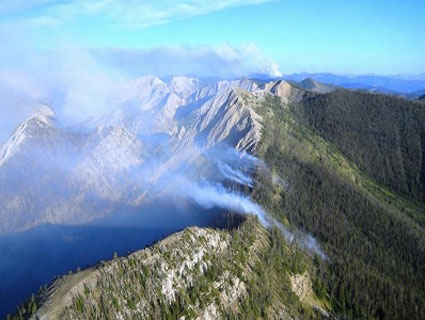 This story was originally published online by OnEarth magazine. Read more about wildfires and climate at OnEarth.org.

On July 12, lightning sparked a forest fire in western Montana’s Bob Marshall Wilderness Complex — a place where wildfires are common this time of year. Usually, if they’re small and don’t threaten to get out of control, the U.S. Forest Service will let them burn. Small fires are good for the forest ecosystem, burning off dead timber and creating habitat for many woodland species; because of that, all U.S. agencies adopted a policy in 1995 to reintroduce fire on federal land.

So what happened last month was unusual: The US Forest Service, which manages the 1.5 million-acre Bob Marshall Wilderness Complex and an additional 35 million acres of federally designated wilderness land nationwide, ordered a full-on attack of the fire by smokejumpers, bucket-bearing helicopters, and four lumbering slurry bombers that each dumped more than 2,000 gallons of red chemical fire retardant on an ecosystem that is otherwise treated as pristine.

This has been happening all across the West this summer, as the Forest Service throws its already-thin firefighting resources at blazes that in previous years would have been allowed to spread naturally and burn out on their own. The stated reason is cost: The Forest Service is so worried that the hot, dry conditions will cause one or more of those small fires to burn out of control—consuming not just acres of forest, but also the agency’s strapped budget—that it’s willing to pour money and resources into fighting blazes that threaten little and are usually considered healthy for the forests.

The policy reversal was announced in an agency-wide memo sent May 25 by James E. Hubbard, the national deputy chief for state and private forestry, and obtained by OnEarth. In it, Hubbard cites abnormally volatile fire conditions throughout the nation, as well as the forest service’s limited firefighting budget. He then orders an “aggressive initial attack” on fires sparked in wilderness area managed by the Forest Service— even though he acknowledges in the very same memo, and later confirmed in an interview with me, that this is an undesirable decision from both a scientific and long-term financial standpoint. (Read the memo on DocumentCloud.)

I started covering wildfires as a Montana newspaper reporter in the late 1980s, so I was around to see the end stages of a long evolution in the nation’s forest fire policy, which shifted from attempts to extinguish all fires to an understanding that fire is a natural — and much-needed — part of the forest landscape. That evolution in thinking culminated in the 1995 Wildland Fire Policy adopted by all federal agencies charged with managing the nation’s inventory of public lands — Forest Service included. The 1995 policy says: “Wildland fire, as a critical natural process, must be reintroduced into the ecosystem.”

This is a statement of fundamental principle that was at least a generation in the making, derived from emerging ecological principles. The record extending back to the last Ice Age is clear: Western forests and savannahs evolved with frequent fire, and removing that fire from those systems did a lot more harm than good. Forests became overgrown and choked with diseased trees. Grassy savannas full of forage for critical wildlife such as elk became forests. The result was more fires, not less.

All of this became painfully apparent in the last quarter of the 20th century, when forest ecologists assessed the 75-year record of aggressive fire suppression that had been the rule on public lands since a series of large fires in the West and even Midwest in the early 1900s sparked fears of a national “timber famine.” The reaction to those fears was what became widely known as the “10 a.m. rule” — that it was a forest ranger’s job to extinguish all fires by 10 a.m. the day after they started. Ecological principles gradually overturned that rule. Fire scientists both within and outside of the Forest Service came to regard it as an antique of the same vintage as Smokey the Bear, wooden fire towers, and handcrank phones that rangers used to report fires.

Nonetheless, Hubbard says in his May 25 memo: “Safe aggressive initial attack is often the best suppression strategy to keep unwanted wildfires small and costs down.” The core of this statement varies from the now-discredited 10 a.m. rule in tone, but not in meaning.

“I acknowledge this is not a desirable approach in the long run,” Hubbard also wrote. And while at least in writing, Hubbard’s order is not ironclad, allowing forest supervisors to appeal to their immediate supervisors to let fires burn, so far this hasn’t happened. In Region One, which covers the northern Rockies and is generally the most active with fires this time of year, 28 blazes had been sparked by natural causes, usually lightning, on federally designated wilderness land as of July 29, according to region spokesman Philip Sammon. All 28 were or are being fought. Firefighters in the Flathead National Forest snuffed five lightning-caused fires in the Bob Marshall in a single day.

Hubbard told me that his rationale for suspending the nearly two decade-old policy is entirely financial. Despite the 1995 policy change, there’s still a lot of unburned timber left in federal forests following the extensive fire suppression of most of the 20th century. At the same time, western population growth and unchecked sprawl have moved new homes and businesses closer to flammable forests, and global warming has created conditions conducive to large and explosive fires. Nationwide (but mostly in the West), wildfires burned an average of 6.9 million acres per year from 2002-2011, almost double the average acreage of the previous decade.

The increase in fires saps the budgets of the Forest Service and the other state and federal agencies charged with fighting wildfires. The Forest Service has a budget of $948 million for fire suppression this year, a decrease of nearly $500 million from last year, when the agency overspent its firefighting budget by $114 million. Hubbard says that absent an increase in its fire budget from Congress, overspending has to be made up by cuts in the agency’s other activities, such as maintaining trails, erasing the damage from old logging roads, and carrying out ecological restoration.

“We know fire on the landscape in the right place under the right circumstances is still something we want to occur,” Hubbard said. “We’re just under the gun on a suppression budget.”

But Hubbard’s budget-balancing instincts may not make sense even in the short term. The Northern Rockies has a long history of wilderness fire, and the record shows that most wildfires, when allowed to burn naturally, stay within wilderness boundaries and cost little to manage, relative to the cost of fighting fire outside of wilderness. And because the wilderness areas are remote and mostly surrounded by other public lands, escaped fires don’t threaten many structures. For instance, the Forest Service has traced this issue closely in the Bitterroot-Selway Wilderness in Montana and northern Idaho, site of some of the earliest experiments in re-introducing wilderness fire beginning in 1972. A study showed conclusively that the big, expensive fires of recent years in that vicinity occurred outside of wilderness, where suppression continued. Fires deep within the wilderness — now a patchwork of burned areas as a result of re-introducing fire — stayed small and cost almost nothing.

Nonetheless, when the Chrandal Creek fire broke out in that same Bitterroot-Selway landscape on July 6 of this year, Hubbard’s directive prompted a full-on assault that continues and has engaged more than 400 firefighters at its peak. Despite the attack, that fire is still burning more than three weeks later, yet the only threat has been to a small group of summer cabins that would cost just thousands of dollars to replace and even less to fireproof so they won’t burn.

In fact, Hubbard and everyone else agree that allowing wildfire in wilderness makes long-term financial sense. “It does. It absolutely does,” said Hubbard. “This is not a good position to be in.”

Niel Lawrence, director of the forestry project at the Natural Resources Defense Council (which publishes OnEarth), argues that the agency is suppressing wilderness fires today as a way of generating future revenue for itself. He said the agency has been deprived of the income it once drew from timber sales (because of greatly decreased demand for lumber and pulp), and so has learned to maximize its income in the fire suppression business. When forests and homes are burning, and the images of slurry bombers are dominating cable news, it’s an opportune moment to pry money loose from Congress. Fire suppression today guarantees there will be more fire in the future to make that gambit sustainable, Lawrence argues.

Regardless of motives, the whole situation takes on an added urgency in light of global warming. Given the prospect of more hot, dry weather and more catastrophic fires in the future, it seems prudent to burn what is burnable now, Lawrence says, again to defuse the future bomb. “We’ve got a window here that’s closing,” he says. “If we don’t get fire back in now, it’s going to be impossible to control it later.”

There’s been overwhelming agreement with that idea in the past from Forest Service fire managers, but sticking to that principle means the bureaucracy needs to accept some short-term risk — including some political risks — for long-term gains. Hubbard made it clear in his conversation with me that the agency, at least at this point, is not willing to do that.

The two other major federal agencies charged with managing public lands — the Bureau of Land Management and the National Park Service — have not followed the Forest Service’s lead. After Hubbard’s memo, they restated that they will continue to follow the 1995 policy. In the mountainous West, however, the Forest Service carries the most weight on this issue; it manages about 60 percent of the total designated wilderness acreage in the 11 contiguous Western states.

“I would agree with that,” Hubbard said. “And this is not a policy shift because we thought we were headed in the wrong direction. It is a financial shift.”

But tight budgets and a hot climate aren’t going away anytime soon. So the Forest Service’s new policy continues to shift the burden of global warming to future generations: their forest fires will be bigger and more costly because we refused to confront the new realities facing us now.