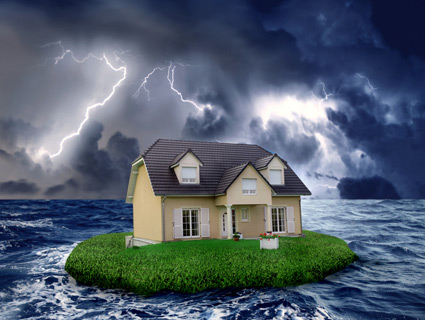 The Williams River was so languid and lovely last Saturday morning that it was almost impossible to imagine the violence with which it must have been running on August 28, 2011. And yet the evidence was all around: sand piled high on its banks, trees still scattered as if by a giant’s fist, and most obvious of all, a utilitarian temporary bridge where for 140 years a graceful covered bridge had spanned the water.

The YouTube video of that bridge crashing into the raging river was Vermont’s iconic image from its worst disaster in memory, the record flooding that followed Hurricane Irene’s rampage through the state in August 2011. It claimed dozens of lives, as it cut more than a billion-dollar swath of destruction across the eastern United States.

I watched it on TV in Washington just after emerging from jail, having been arrested at the White House during mass protests of the Keystone XL pipeline. Since Vermont’s my home, it took the theoretical—the ever more turbulent, erratic, and dangerous weather that the tar sands pipeline from Canada would help ensure—and made it all too concrete. It shook me bad.

And I’m not the only one.

New data released last month by researchers at Yale and George Mason universities show that a lot of Americans are growing far more concerned about climate change, precisely because they’re drawing the links between freaky weather, a climate kicked off-kilter by a fossil-fuel guzzling civilization, and their own lives. After a year with a record number of multi-billion dollar weather disasters, seven in ten Americans now believe that “global warming is affecting the weather.” No less striking, 35 percent of the respondents reported that extreme weather had affected them personally in 2011. As Yale’s Anthony Laiserowitz told the New York Times, “People are starting to connect the dots.”

Which is what we must do. As long as this remains one abstract problem in the long list of problems, we’ll never get to it. There will always be something going on each day that’s more important, including, if you’re facing flood or drought, the immediate danger.

But in reality, climate change is actually the biggest thing that’s going on every single day. If we could only see that pattern we’d have a fighting chance. It’s like one of those trompe l’oeil puzzles where you can only catch sight of the real picture by holding it a certain way. So this weekend we’ll be doing our best to hold our planet a certain way so that the most essential pattern is evident. At 350.org, we’re organizing a global day of action that’s all about dot-connecting; in fact, you can follow the action at climatedots.org.

The day will begin in the Marshall Islands of the far Pacific, where the sun first rises on our planet, and where locals will hold a daybreak underwater demonstration on their coral reef already threatened by rising seas. They’ll hold, in essence, a giant dot—and so will our friends in Bujumbura, Burundi, where March flooding destroyed 500 homes. In Dakar, Senegal, they’ll mark the tidal margins of recent storm surges. In Adelaide, Australia, activists will host a “dry creek regatta” to highlight the spreading drought down under.

Pakistani farmers—some of the millions driven from their homes by unprecedented flooding over the last two years—will mark the day on the banks of the Indus; in Ayuthaya, Thailand, Buddhist monks will protest next to a temple destroyed by December’s epic deluges that also left the capital, Bangkok, awash.

Activists in Ulanbataar will focus on the ongoing effects of drought in Mongolia. In Daegu, South Korea, students will gather with bags of rice and umbrellas to connect the dots between climate change, heavy rains, and the damage caused to South Korea’s rice crop in recent years. In Amman, Jordan, Friends of the Earth Middle East will be forming a climate dot on the shores of the Dead Sea to draw attention to how climate-change-induced drought has been shrinking that sea.

In Herzliya, Israel, people will form a dot on the beach to stand in solidarity with island nations and coastal communities around the world that are feeling the impact of climate change. In newly freed Libya, students will hold a teach-in. In Oman, elders will explain how the weather along the Persian Gulf has shifted in their lifetimes. There will be actions in the cloud forests of Costa Rica, and in the highlands of Peru where drought has wrecked the lives of local farmers. In Monterrey, Mexico, they’ll recall last year’s floods that did nearly $2 billion in damage. In Chamonix, France, climbers will put a giant red dot on the melting glaciers of the Alps.

And across North America, as the sun moves westward, activists in Halifax, Canada, will “swim for survival” across its bay to highlight rising sea levels, while high-school students in Nashville, Tennessee, will gather on a football field inundated by 2011’s historic killer floods.

In Portland, Oregon, city dwellers will hold an umbrella-decorating party to commemorate March’s record rains. In Bandelier, New Mexico, firefighters in full uniform will remember last year’s record forest fires and unveil the new solar panels on their fire station. In Miami, Manhattan, and Maui, citizens will line streets that scientists say will eventually be underwater. In the high Sierra, on one of the glaciers steadily melting away, protesters will unveil a giant banner with just two words, a quote from that classic of western children’s literature, The Wizard of Oz. “I’m Melting” it will say, in letters three-stories high.

This is a full-on fight between information and disinformation, between the urge to witness and the urge to cover-up. The fossil-fuel industry has funded endless efforts to confuse people, to leave an impression that nothing much is going on. But—as with the tobacco industry before them—the evidence has simply gotten too strong.

Once you saw enough people die of lung cancer, you made the connection. The situation is the same today. Now, it’s not just the scientists and the insurance industry; it’s your neighbors. Even pleasant weather starts to seem weird. Fifteen thousand US temperature records were broken, mainly in the East and Midwest, in the month of March alone, as a completely unprecedented heat wave moved across the continent. Most people I met enjoyed the rare experience of wearing shorts in winter, but they were still shaking their heads. Something was clearly wrong and they knew it.

The one institution in our society that isn’t likely to be much help in spreading the news is… the news. Studies show our papers and TV channels paying ever less attention to our shifting climate. In fact, in 2011 ABC, CBS, NBC, and Fox spent twice as much time discussing Donald Trump as global warming. Don’t expect representatives from Saturday’s Connect the Dots day to show up on Sunday’s talk shows. Over the last three years, those inside-the-Beltway extravaganzas have devoted 98 minutes total to the planet’s biggest challenge. Last year, in fact, all the Sunday talk shows spent exactly nine minutes of Sunday talking time on climate change—and here’s a shock: all of it was given over to Republican politicians in the great denial sweepstakes.

So here’s a prediction: next Sunday, no matter how big and beautiful the demonstrations may be that we’re mounting across the world, “Face the Nation” and “Meet the Press” won’t be connecting the dots. They’ll be gassing along about Newt Gingrich’s retirement from the presidential race or Mitt Romney’s coming nomination, and many of the commercials will come from oil companies lying about their environmental efforts. If we’re going to tell this story—and it’s the most important story of our time—we’re going to have to tell it ourselves.

Bill McKibben, a TomDispatch regular, and the author, most recently, of Eaarth: Making a Life on a Tough New Planet, is the founder of 350.org, which is coordinating Saturday’s Connect the Dots day. You can find the event nearest you by checking climatedots.org. Follow TomDispatch on Twitter @TomDispatch and join us on Facebook. To stay on top of important articles like these, sign up to receive the latest updates from TomDispatch.com here.