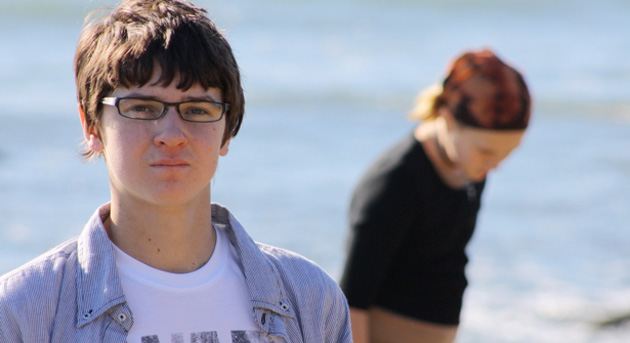 Alec Loorz became a climate activist at age 12 after watching An Inconvenient Truth twice in one evening. Photo: Victoria Loorz

This story was produced by the Atlantic as part of the Climate Desk collaboration.

Alec Loorz turns 18 at the end of this month. While finishing high school and playing Ultimate Frisbee on weekends, he’s also suing the federal government in US District Court in Washington, D.C.

The Ventura, California, teen and four other juvenile plaintiffs want government officials to do more to prevent the risks of climate change—the dangerous storms, heat waves, rising sea levels, and food-supply disruptions that scientists warn will threaten their generation absent a major turnabout in global energy policy. Specifically, the students are demanding that the US government start reducing national emissions of carbon dioxide by at least six percent per year beginning in 2013.

“I think a lot of young people realize that this is an urgent time, and that we’re not going to solve this problem just by riding our bikes more,” Loorz said in an interview.

The youth—represented, pro bono, by the Burlingame, California, law firm of former US Republican congressman Paul “Pete” McCloskey, a co-founder of Earth Day—filed the suit, Alec L. et. al vs. Lisa P. Jackson, et. al, in May of last year. Defendants include not only Environmental Protection Agency Administrator Lisa Jackson but the heads of the Commerce, Interior, Commerce, Defense, Energy, and Agriculture departments. This Friday, US District Court Judge Robert L. Wilkins, an Obama appointee, will hear arguments on the defendants’ motion to dismiss the complaint.

While skeptics may view the case as little more than a publicity stunt, its implications have been serious enough to attract the time and resources of major industry leaders. Last month, Judge. Wilkins granted a motion to intervene in the case by the National Association of Manufacturers, joined by Delta Construction Company, Dalton Trucking Inc., Southern California Contractors Association, and the California Dump Truck Owners Association.

“At issue is whether a small group of individuals and environmental organizations can dictate through private tort litigation the economic, energy, and environmental policies of the entire nation,” wrote National Association of Manufacturers spokesman Jeff Ostermeyer in an email. Granting the plaintiffs’ demands, he added, “would carry serious and immediate consequences for industrial and economic productivity—increasing manufacturing and transportation costs and decreasing global competitiveness.” The manufacturers’ legal brief says the restrictions being sought “could substantially eliminate the use of conventional energy in this country.” It also argues that the plaintiffs haven’t proved they have a legal right to sue.

The plaintiffs contend that they have standing to sue under the “public trust doctrine,” a legal theory that in past years has helped protect waterways and wildlife. It’s the reason, for example, that some state government agencies issue licenses to catch fish or shoot deer, particularly when populations are declining. The doctrine has never before been applied to the atmosphere, and it’s a trickier prospect, not least because the sources of atmospheric pollution are so diffuse and wide-ranging, extending to other countries whose actions the United States may not be able to influence.

Defense attorneys have, in fact, have argued that the plaintiffs are essentially seeking for a court to make foreign policy decisions. To this, the plaintiff’s attorneys counter that other nations’ supposed inaction on climate change shouldn’t be used as an excuse for the United States to do nothing. “That is like saying poverty exists everywhere, other countries have poverty, so it is ok for us to permit poverty,” attorney Phil Gregory wrote in an email.

While teenagers serve as the public face of the lawsuit, the idea itself came from Julia Olson, an attorney based in Eugene, Oregon. Olson founded an organization called Our Children’s Trust after watching the Al Gore documentary An Inconvenient Truth while she was seven months pregnant. Her idea to invite kids to become plaintiffs in a suit against the government was partly inspired by her colleague Mary Christina Wood, director of the Environmental and Natural Resources Law Program at the University of Oregon. Wood has spent her career studying the public trust doctrine, most recently devising a strategy she has dubbed Atmospheric Trust Litigation to apply that theory to the climate.

Wood told Olson about a case from the Philippines, where in the early 1990s a combative environmental attorney named Antonio Oposa represented 43 children, including some of his relatives, in a class action suit to defend the archipelago’s small vestige of old-growth forest from logging firms. The children’s case against the country’s head of Environment & National Resources was ultimately upheld by the Philippines’ Supreme Court, inspiring similar suits throughout the world.

Olson and other supporters of the suit believe that having kids as plaintiffs makes a particularly visceral appeal to adults to take action. Indeed, many of the adults involved said that their own children and grandchildren had inspired them. “Becoming a grandfather motivated me to speak out,” said climate scientist James Hansen, the director of the US NASA Goddard Space Institute and the man who first brought Loorz and Olson together. Hansen, in his free time, is a conscientious objector to US energy policy who has been arrested three times at peaceful protests.

In support of the children’s suit, Hansen has drawn up recommendations as to how the US government can meet the greenhouse-gas reduction goals, through cuts in fossil-fuel-powered electricity and reforestation. “My talents are mainly in the sciences,” he said, “but it just became so clear that no one is doing anything to prevent what is becoming scientifically a very clear picture. I didn’t want my grandchildren to say that “Opa” (Dutch for “grandpa”) knew what was happening but didn’t do anything about it.”

The tall, lanky Loorz is an especially compelling spokesman for the US children’s lawsuit. He became a climate activist at age 12, when, like Olson, spurred to action after watching An Inconvenient Truth—in his case, twice in one evening. He went on to found an organization called Kids vs. Global Warming, and traveled the world, giving more than 200 speeches at schools and other venues to more than 100,000 people altogether.

The federal suit, which was first filed in California and then relocated to Washington, D.C., was initially coordinated with a dozen similar lawsuits against individual states. Four of those suits have been dismissed, while eight are still active, according to organization spokeswoman Meg Ward. With both the executive and legislative branches having been stymied on any major climate-change progress for more than two decades, the federal lawsuit represents a kind of Hail Mary pass, trusting that courts might bring about a speedier solution.

“The judicial branch is much less influenced by special interests such as the fossil fuel industry,” said Hansen, who recalled that US courts have succeeded in breaking such policy logjams in the past, including in the successful cases against tobacco firms and the enforcement of racial integration during the Civil Rights battles.

When it comes to climate change, however, it’s unclear how far US judges may be willing to proceed. In 2009, six states, New York City, and several land trusts sued utilities operating fossil fuel-powered electricity plants, in a somewhat similar effort to cut greenhouse gas emissions. The plaintiffs argued that the emissions’ contribution to climate change constituted a “public nuisance,” under common law. But last June, the US Supreme Court blocked their effort. Writing for the court, Justice Ruth Bader Ginsburg said the US Clean Air Act passed by Congress didn’t allow for what she called a “parallel track” of enabling federal judges to control emissions.

While the adults continue their argument, Loorz says kids his age are much more worried about climate change than many of their parents might imagine. Indeed, one British survey found that children between the ages of 11 and 14 worry more about climate change (74 percent) than about their homework (64 percent). “I used to play a lot of video games, and goof off, and get sent to the office at school,” he said. “But once I realized it was my generation that was going to be the first to really be affected by climate change, I made up my mind to do something about it.”

It may seem ironic that the hyper-focused Loorz is one of the more than five million youth diagnosed with Attention Deficit/Hyperactivity Disorder. In this case, however, Loorz contends that it’s the grownups who are suffering from disabling distraction. He argues that US politicians are so preoccupied by the lingering economic crisis and this year’s presidential campaign that they’re ignoring an environmental threat that could ultimately bring about devastating consequences.

“Sometimes I do ask myself, like is there really any chance to solve this problem?” Loorz acknowledged. “I feel a lot of despair sometimes, but when I talk to Dr. Hansen, he says there is still hope, so I have to trust that he knows more than I do about this.”