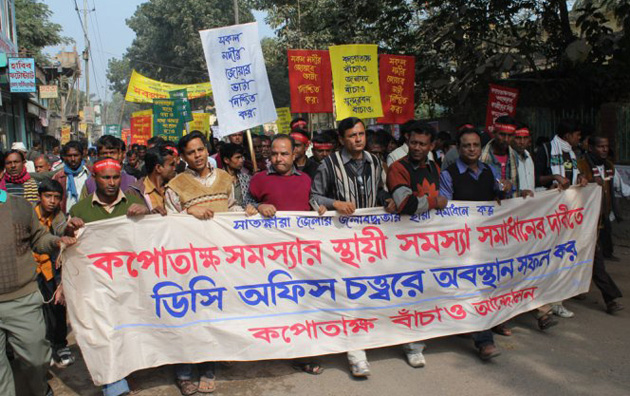 Kai Ryssdal: There are, the United Nations tells us, 7 billion people now living on this planet. By the middle of the century, it’ll be 9 billion. Among the many questions that raises is: How are we going to feed them all? The answer is complicated. It’s a mix of politics, cultures, science and traditions that all affect the global food supply.

Today, for our series “Food for 9 Billion,” Jon Miller takes us to Bangladesh, where climate change is threatening the very delicate balance between bumper crops and disaster.

Reporter Jon Miller: In case you hadn’t heard, Bangladesh is one of the world’s great food success stories. In the 1970s, famine killed more than a million people. But since then, the country has made huge strides.

It’s still extremely poor. But incomes are up, malnutrition is down, and the population growth rate is about half what it was a generation ago. And it produces enough rice—the staple food—to feed just about everybody, which is no small feat, since it’s got half the population of the United States crammed into a space the size of Iowa. The question now is whether climate change will sweep those gains away.

People tell me if I want to see what Bangladesh is up against, I should head down to Gabura island in the Bay of Bengal. So I hire a car and ride for hours on narrow, tree-lined roads through a world that’s half land and half water, with rice paddies and fish ponds and just plain pond ponds.

I stop at a concrete pier, step into a wooden boat and chug about 15 minutes across a gray channel.

On the island, I find a motorcycle taxi, climb onto the back and bump along on a built-up track through what used to be shimmering rice fields, but now is a wasteland of salt flats and mud.

That’s where I find Muhammad Sekendar Ali, a small man with a thin white beard, standing in what’s left of his rice paddy, hacking at the bank with a short-handled hoe.

He cuts a wedge of earth and lifts it into a bowl he’s fashioned out of a rice sack and sticks. His son, Salauddin, hoists it onto his head, walks about 30 yards to a tiny house and dumps the mud outside the door. Then he comes back for another load.

This is one way to prepare for climate change—you build an earthen platform to raise your house a few feet off the ground. That way, the next time a cyclone comes and the sea rises and breaks the embankments and floods your land with saltwater, you might not lose everything you own. I ask Sekendar if he figures his family will be safe here now.

That, he says, depends on God, but also on some basic engineering. The trick is not to raise the house too high, because then the next storm will just blow it over.

So pick your poison: wind or flood. That’s the sort of choice people are having to make in Bangladesh these days, because almost everything that climate change is expected to bring is already here: Stronger and more frequent storms. Erratic rainfall. Salty soils that make it impossible to grow crops.

And the scariest thing is looming on the horizon. If the sea level rises as much as many scientists expect it to—about 3 feet over the next 90 years—one-sixth of Bangladesh could go underwater, and 15 million people will have to leave. Most of them will be farmers. They won’t be producing food, and they’ll need to eat.

Hasan Mahmud: Food security is the biggest challenge for us, ensuring food security for the people. There is tremendous, tremendous threat posed by climate change.

Reporter: That’s Hasan Mahmud, a former environmental activist who’s now the country’s environment minister. I’m lucky to catch him in his office in Dhaka. He’s been traveling the world, raising the alarm—and trying to raise money.

Mahmud: Global community has been talking a lot. But delivery is very little.

Reporter: Bangladesh has a detailed plan for how to adapt to climate change. It says it needs $10 billion right away to pay for things like shoring up seawalls and building cyclone shelters, then billions more every year after that. So far, it’s raised a few hundred million.

Mahmud: We have been trying to help ourself. But we cannot tackle the total scenario. And we are not responsible for this scenario. So we need the assistance from the global community.

Reporter: The United States has boosted aid for Bangladesh, although not as much as the government here would like. Some of it’s for straight-up disaster preparedness, but David Yanggen of the US Agency for International Development says a lot of it’s to try to help farmers cope with a changing climate, like supporting research into rice varieties that can tolerate flooding or salt.

David Yanggen: The other thing that we’re really trying to do here is diversify away from an agricultural economy so dependent on rice. So we’re very much trying to promote fish farming, as well as horticulture. The more we can diversify, the more they will be resilient to these types of climatic shocks.

John Duxbury: I think in many ways, Bangladesh is a laboratory for climate change.

Reporter: John Duxbury is an agriculture specialist at Cornell who’s been working in Bangladesh since the 1990s.

Reporter: Duxbury says a good place to start is by getting more out of what’s already there. For instance, his research group found that just adding lime to soils in northern Bangladesh, where most of the country’s food comes from, can increase crop yields by more than a third.

Duxbury: There’s many techniques, some of which are fairly simple, which we can currently apply to increasing food production. Liming is one. Shifting to crops that use less water. The environment is one that can be highly productive for agriculture.

Reporter: Of course, that environment is changing. So people have started planting vegetable gardens on rafts that float when there’s a flood. Others are converting rice fields into ponds for fish or shrimp, although that’s rarely an option for the poorest farmers.

Duxbury: More than sort of one great big solution, I think there’s going to be lots of little solutions to specific problems in specific places.

Reporter: No one I talk to can say whether all those little solutions will be enough. In fact most are pretty pessimistic, especially about the rising sea level. The consensus is that the best way to deal with climate change is to keep it from happening in the first place. But Bangladesh has little power to do that. So people here do their best to adapt.

One afternoon I visit a village in the south. Last year a storm surge crashed through an old concrete barrier. The villagers demanded a new one. The government said it would design it if the community did the work. And so here they are, hundreds of them, in bare feet or flip flops, carrying sand bags, helping out on a makeshift pile driver. There may not be much money here. But in the most crowded country in the world, there are plenty of people willing to pitch in.

This story was produced by the Center for Investigative Reporting as part of the Climate Desk collaboration.