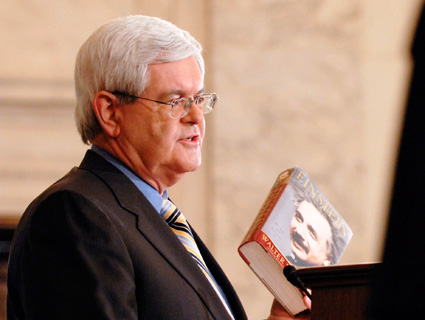 Gingrich at a climate change debate in 2007Mark Murrmann/ZUMA

Newt Gingrich has already taken plenty of heat for the now infamous advertisement in which he sat on a couch with Nancy Pelosi proclaiming that we can all work together to solve climate change. His primary opponent, Mitt Romney, has created an entire website devoted to mocking the episode, which Gingrich argues was “misconstrued”; he was really on that couch to show that he is willing to fight liberals (or something). But Gingrich’s long history of caring about climate change goes well beyond the couch.

Sure, Gingrich may have scrapped the chapter of his forthcoming book that dealt with climate change. And he may have tried to compensate for his previous green-leanings with his crusade to abolish the Environmental Protection Agency. But before his run for president, Gingrich was an enthusiastic supporter of not just action on climate change, but investment in climate-science research.

In a November 2000 forum on policy in Science, Gingrich advocated for more government investment in scientific research and technology. In his essay, he specifically highlighted the need to allocate more money for climate research to the National Oceanic and Atmospheric Administration. He lamented that NOAA is “so strapped for money” that it could barely keep its basic programs running, let alone make major new investments in cutting-edge research.

In weather and climatology, we are drifting toward spending trillions of dollars under the Kyoto Global Warming Protocol. Yet we fail to increase the current budget by <0.1% as much for a worldwide climatology project that would include space-based and land-based ocean and atmospheric monitoring on a scale that is technically possible with modern systems.

This sentiment sets Gingrich apart from the current batch of Republicans in Congress, who have long been after NOAA and made the agency’s climate work their prime target.

Gingrich’s respect for science was also evident in a 2007 Frontline interview during which he was asked about what convinced him global warming was real. “Oh, I think the weight of evidence over time [convinced me] that it’s something that you ought to be careful about,” he replied. And while he dismissed Kyoto as “anti-American,” he also lamented the “lost opportunity” to discuss “a pro-science and pro-technology strategy that lowers the amount of damage the human race does to the planet.”

Gingrich advocated for science long before he left Congress. In 1986, he was one of the original cosponsors of a landmark bipartisan bill in the House of Representatives aimed at curbing acid rain. He appeared at a press conference touting the bill, along with environmental champions Morris Udall (D-Ariz.) and Henry Waxman (D-Calif.). “It’s clear there is a relationship between burning fossil fuels and acid rain,” Gingrich said at the time. “We do know enough to do some things.”

That bill never became law, and Congress didn’t deal with acid rain until it imposed a cap-and-trade plan via the Clean Air Act amendments in 1990—which Gingrich voted for as well.

And in fact, Gingrich’s action on acid rain was part of what helped him secure a leadership position in his party. In the 1989 tussle over who would become the next GOP minority whip, Gingrich used his position on acid rain to win over moderate Northeastern Republicans and defeat Illinois Republican Edward Madigan. Dennis Hastert, who later succeeded Gingrich as speaker of the House, recalls in his autobiography that Gingrich wooed votes by touting his environmental cred: “[T]hey jumped on Newt’s bandwagon and that’s how he won.” Gingrich’s position as whip eventually led to his ascension to speaker in 1995.

But that was then. Now, Gingrich is much less enthusiastic about science and the environment. And the explanation seems is fairly simple: Gingrich the professor likes grandiose ideas like earth-orbiting climate monitors, space honeymoons, a $40 billion investment in laptops for poor people, or bringing back the dinosaurs. But Gingrich the presidential hopeful is campaigning in an age where not just denying climate change but actively disdaining scientific research is the standard in the Republican Party.

To wit: “I think that the evidence is not complete, and I think we’re a long way from being able to translate a computer program into actual science,” he told Bill O’Reilly in November. “I think it would be fair to say that I am open-minded and certainly not prepared to spend trillions of dollars over a theory.”