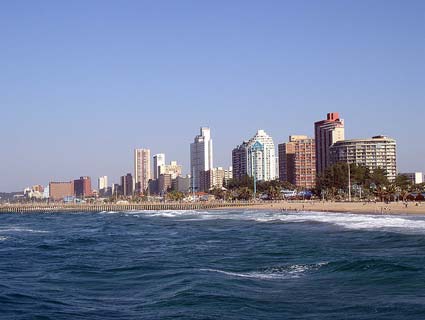 What a difference two years makes. Heading into the 15th Conference of the Parties, the annual United Nations confab on climate change, hopes were high in Copenhagen, Denmark, that world leaders would hash out a new international agreement on how to address rising temperatures. Now, two years later, many of the same questions remain as negotiators arrive in Durban, South Africa, this week.

Will the United States and leaders of major developing nations like China and India agree to legally binding emission reduction targets? What will come of the Kyoto Protocol, the current pact that guides climate goals set by industrialized nations? (Excluding, of course, the US.) Where will the promised $100 billion in long-term financing to help the poorest nations deal with climate change come from? All of these questions loom as negotiators meet in Durban from November 28 through December 10.

In order to understand what’s at stake this year, context of the last few years of negotiations is helpful. Let’s recap: Back in 2007, world leaders laid out a path at the climate conference in Indonesia that was expected to lead to a binding agreement two years later in Copenhagen. This was still under the Bush administration, and US negotiators were booed in Bali for resisting; they eventually agreed to that plan. Shortly thereafter, the United States elected Barack Obama, who had pledged to take action on climate change. This is why hopes were so high for Copenhagen.

But talks there stalled, to put it nicely. At the 11th hour, Obama swooped in, huddled with a small group of ally countries, and produced a political statement known as the Copenhagen Accord. Rather than an actual plan, it was more of an agreement that countries would make nonbinding commitments to cutting emissions and rallying finances. It was unclear how that document would be brought into the formal United Nations Framework Convention on Climate Change (UNFCCC) process that requires the approval of all member countries.

A year later, at the 16th-annual meeting in Cancun, Mexico, negotiators made baby steps of progress: They formalized their commitments to cut greenhouse gas emissions made by both developed and developing countries made in Copenhagen by adopting it through the UNFCCC process; agreed to create a system for making sure countries are living up to those commitments; and created the Global Climate Fund, which is intended to provide $100 billion in financing to developing countries by 2020.

Last year’s meeting did not, however, address some of the tougher questions. Those include:

1. Will the countries that joined the Kyoto Protocol agree to a second commitment period? The first commitment period for the protocol, adopted in 1997, will end in 2012. Japan, Russia, and Canada continue to object to a new commitment period if other major emitters like the United States and China are not under an accord. The European Union has led the push for a second commitment period, and it’s a top goal for developing nations who see the existing agreement as their only assurance that major emitters will uphold their promises. It’s unlikely that countries will let Kyoto die in Durban; the G77 and China, the bloc that represents developing nations in the United Nations, has made it clear that they won’t let that happen. “The African leaders have expressed in different forums that Durban cannot become the grave of the Kyoto Protocol, and the Group are completely supportive of that ambition,” said the G77 in a preconference statement. In the very least, countries will find a way to delay the decision again, like they did last year.

2. When will there be a new, legally binding treaty? While the United States is not a party to Kyoto, it is still the major factor holding up progress on that front, because other countries want an assurance that the US will take part in the next accord. As of yet, there is no indication on when, or even whether, the commitments from Copenhagen would become formal, legal agreements. While 2012 was once the target for a new, binding deal, it’s now looking more like 2015 or 2016 for an agreement, which wouldn’t go into effect until 2020. The US has been reluctant to establish a time frame, however.

3. Where does China stand? The big story for the last few years has been the antagonism between the major emerging economy and the United States. China has been reluctant to sign a binding agreement, and the US has demanded transparency elements in the deal that China doesn’t like. Some observers have predicted that China could take a stronger stance on emission goals, given their massive investment in clean energy and their desire to be seen as a world power. This could, in turn, push the US toward action.

4. How will we pay for climate change? While the Cancun agreement set up a structure for the Green Climate Fund, it’s still unclear how developed nations will put money in that fund, whether that will be new aid, and whether it will come from public or private sources. The fund is supposed to allow developed countries to direct some $100 billion in aid to developing countries to help cut emissions and adapt to the changes that are already underway by 2020. When the transitional committee created to set up the fund met in Cape Town, South Africa, in October, they weren’t able to approve the draft design due to objections from the United States and Saudi Arabia. The proposed design is expected to be approved in Durban, but nations will likely leave the big questions for the committee to work out next year—including where all that money is going to come from and how it will be distributed. There has been discussion of a variety of sources, like a new tax on the emissions from shipping and international aviation or a tax on financial transactions, but the US and some other developed countries have so far resisted efforts to tell them how to generate those funds. Don’t expect that to change in Durban.

5. What role will the United States play? The US is, of course, the only developed country not currently included under the Kyoto Protocol, and much of the holdup on a new legally binding agreement is concern that the US will once again be the holdout. In previous negotiating sessions, the US has been firm about transparency rules for developing countries—often referred to as “monitoring, reporting, and verification” in UN speak—but has been unwilling to commit to a road map for a legal agreement. The US position has also been a major concern on the finance side. “The US continues to say it’s supportive of mobilizing large sums of money to deal with this challenge, but it has been resistant within the climate setting to have a conversation about how to mobilize those resources,” said David Waskow, the climate change program manager with the humanitarian group Oxfam America. He also expressed concern that the United States could use progress on the establishment of the fund as “a bargaining chip” to ensure it gets what it wants on the other components of a deal.

“We see Durban as a real fork in the road in this process,” says Alden Meyer, director of strategy and policy for the Union of Concerned Scientists. Countries can either build on Kyoto, while continuing the work on a new accord. Or countries could continue the type of voluntary program that the US and some others have indicated they prefer. But, says Meyer, that second option is “unlikely to be up to the task of meeting the urgency of the science.”