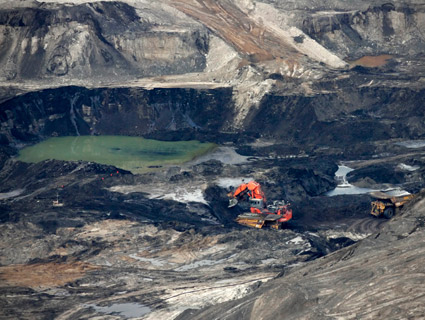 A view of the Alberta tar sandsUPPA/ZUMA

This summer, as environmental groups converged on Washington, DC, to protest the Keystone XL oil pipeline, a Canadian “grassroots” nonprofit by the name of Ethical Oil went on the counteroffensive. The group’s YouTube videos and TV ads all carried the same blunt message: You can buy oil from Saudi Arabia and bankroll terrorism, the oppression of women, and fanatical Islam, or you can buy oil from Canada, your friendly, democratic neighbors to the north.

This “ethical oil” argument comes from Ezra Levant, a Canadian political commentator and the group’s cofounder. A middle-aged man with an easy smile and expressive eyebrows, he comes across in his speaking engagements as a personable, straightforward guy with a commonsense argument. In his book, he doesn’t try to impress with big words or even mildly complex ideas. He interjects his policy discussions with short sentences like “Wow.” You feel like you’re sitting down with a sensible old friend to chat about the follies of anti-tar-sands protesters.

Levant’s deceptively simple arguments have been gaining traction among the champions of Alberta’s tar sands, and they were even picked up recently by US Energy Secretary Steven Chu. Yet they neglect some key facts: In a global oil market, escalating demand ensures that the Saudis will never want for customers, no matter how much the US takes from Canada. Even the pro-Keystone XL Petroleum Economist notes that the “Ethical Oil” approach includes “strange arguments that show little grasp of the global economy, or the way its most important commodity is traded.” Unfortunately, these counterarguments are more complex, lacking the sound-bite simplicity of Ethical Oil’s good-versus-evil message.

If you’re familiar with the tobacco industry’s all-out campaign to downplay the adverse health effects of cigarettes, Levant’s rhetorical style might sound familiar. From June 2009 to June 2010, Levant was a registered lobbyist for Rothmans Inc., a subsidiary of Phillip Morris International. During his stint with Rothmans, he successfully convinced regulators to crack down on cigarette smuggling instead of increasing the size of health warning labels on cigarette packages, claiming that smuggling posed the greater public health risk. Contraband tobacco, he argued, is especially harmful to adolescents, who can buy it without having to show identification.

That lobbying paid off. Six months after Levant concluded his work for Rothmans, Health Canada abandoned its plans to increase the size of warning labels on tobacco products and announced that it would instead focus on fighting contraband cigarettes. The Canadian Broadcasting Corporation reported that this turn around was preceded by a heavy lobbying campaign on the part of Rothmans and other tobacco companies. As Dave Hammond, a University of Waterloo professor who consulted on the planned warning labels, told the CBC, the tobacco companies “use contraband as a blunt weapon to try and beat down anything else that might be effective.” (Health Canada recently changed its mind on label size yet again.)

In May of 2010, while still a registered lobbyist for Rothman’s, Levant also began lobbying on behalf of the Ontario Korean Businessmen’s Association, a nonprofit representing 2,300 convenience store owners. On Levant’s first day of lobbying for the association, the OKBA issued a press release announcing it was launching a campaign against contraband cigarettes.

Levant’s rhetoric is catching on. At a rally for the Progressive Conservative party in September, ex-provincial Premier of Newfoundland and Labrador Danny Williams credited the industry with a job well done: “The petroleum producers came to see us two or three years ago, and they were worried,” he said. “They were really worried that they had let [the oil sands’ image] go too far. And they turned it around, this whole Ethical Oil approach, it’s a great approach.”

And it’s an approach that’s worked for Levant twice now. In both cases, he presented a false ultimatum—first that the tobacco industry’s product was the only alternative to contraband cigarettes, and now that tar-sands oil is the only ethical way to avoid crude from the Middle East. Levant’s success on both the tobacco and oil fronts makes sense; he clearly understands the desire to do the right thing and knows how to turn that desire to industry’s advantage. But as prominent Canadian environmental activist David Suzuki said recently, “Oil has never been about ‘ethics.’ It has always been about money.”