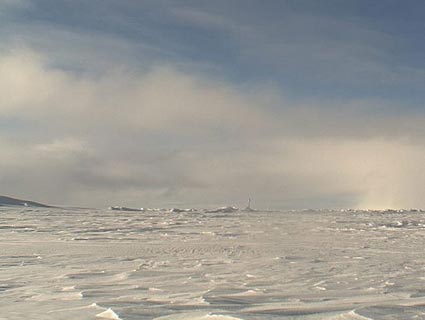 Last month, I flew on a direct flight from DC’s Dulles Airport to Beijing. About eight hours into the flight, I was surprised to learn that we were flying straight over the North Pole. From the window, I could see the vast stretches of ice floes and not much else. The plane was flying low enough that a man near the galley window took a photo with his iPhone that showed distinct snowy peaks. Passengers jokingly asked children whether they could see Santa Claus. It was eerily bright. Big cracks across the ice revealed canyon-like patches of open water. I had visions of what it must have been like when Ernest Shackleton got the Endurance stuck in the ice near the South Pole.

As cool as it was to be flying over the top of the world, I had the distinct feeling that maybe this wasn’t such a good idea. Some of my misgivings were for safety reasons: There aren’t a whole lot of places to land out there should someone try smoking in the lavatory or if an engine falls off. But also, the North Pole looked, to my eye at least, like untouched wilderness. It’s the last really unexplored place on earth, and it seemed like even the odd commercial jet could really disturb some critical if poorly understood ecological balance. But really, what did I know? I was just a random passenger.

So when I got home, I decided to consult some experts to see what the possible environmental impacts might be, if any. What I learned is that flights over the North Pole have a lot of net benefits for the environment in terms of climate change. But those benefits have to be weighed against some fairly serious potential health issues for passengers—none of which were disclosed to us when I booked my ticket.

Commercial flights directly over the North Pole are a fairly new phenomenon. They weren’t really an option for Americans until the Soviet Union fell apart and the Russians stopped worrying so much that we were going to drop bombs on them. But since about 2000, the number of transpolar flights has increased considerably.

In terms of environmental impact, those developments may be a good thing, because they shave significant amounts of flying time off trips from the US to Asia, saving hundreds of gallons of jet fuel and reducing the pollution produced by the jets. When Canadian officials were contemplating opening up the airways to more commercial jets over the North Pole in 2000, they estimated that the route would knock five hours off the usual flying time for a trip from New York to Hong Kong, for instance. That’s serious money—and jet fuel.

One of aviation’s biggest contributions to climate change is the contrail, those clouds of condensed water vapor created by the jet exhaust. Because they trap outgoing radiation from the earth, the contrails are thought to contribute to global warming. I thought maybe some of this could be more pronounced at the North Pole, where holes in the ozone tend to show up, and where there are already myriad concerns that the ice is quickly melting from increased global temperatures. But David Fahey, a research physicist with NOAA’s Earth System Research Laboratory who studies the upper atmosphere, says that he suspects that the arctic climate at the pole isn’t very conducive to contrails, so that’s probably not an issue. He posits that the Earth may be better off with more jets flying over the pole.

People on those jets, however, might not be. One of the complications of flying over the North Pole is that planes and their passengers are exposed to significantly more radiation, especially during solar storms, than they would be on a traditional route. That’s because the planes travel through the thinnest layer of the magnetosphere, which typically shields the earth and other commercial flights from cosmic radiation.

When the transpolar flights were first considered in 2000, scientists estimated that flying over the North Pole would expose passengers to the amount of radiation they’d get in three chest X-rays, which could be hazardous to pregnant women. (Traditional routes would have exposure similar to less than two X-rays.) In 2009 NASA researchers discovered that during a 2003 solar storm, people flying over the North Pole would have been exposed to about 12 percent of the annual radiation limit recommended by experts, significantly more than regular commercial flights.

Along with the radiation issues, flying over the North Pole presents some safety issues, in part because of the lack of places to land in an emergency (a concern when flying over the Pacific Ocean as well), but also because the magnetic forces and solar activity at the pole can really screw up navigation and communications systems. Planes making transpolar flights need special equipment to keep from getting lost—as the Korean Air flight 902 did when trying to make the polar route in 1978, prompting the Soviets to open fire and kill two passengers on the jet. There haven’t been any major polar air disasters recently, but it’s still something to consider when you book your ticket.

When it comes to weighing the environmental pluses and the health and safety minuses, taking a flight that may cross the pole is a complicated equation. If you’re an infrequent traveler, the polar flight probably makes sense. If you’re pregnant, you might want to take the long route or stay home. And if you travel to Asia a lot, Fahey jokes, “Wear lead-lined clothes next time.”