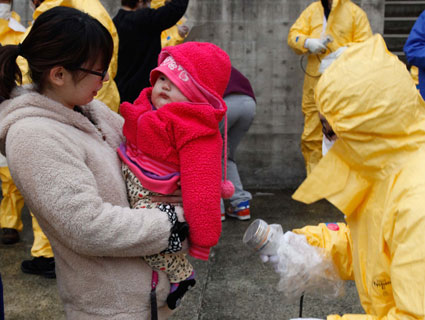 By all accounts, the situation at Japan’s troubled Fukushima Daiichi nuclear power plant appears to be getting worse. (Be sure to check out our real-time updates for the latest news.) Just how bad it could get?

Nuclear power experts and watchdogs warn that we’re entering uncharted territory. “The situation is worsening,” says Robert Alvarez, a scholar at the Institute for Policy Studies and a former senior policy advisor to the secretary of energy during the Clinton administration. “It seems to be slipping out of the control of authorities.” The situation at the Japanese plant is constantly changing and involves several reactors in various states of disrepair. The chairman of the Nuclear Regulatory Commission, Greg Jaczko, says it could be “possibly weeks” before it is totally under control. Until then, the risk of a full meltdown still looms.

To recap: The Fukushima Daiichi Power Plant has six nuclear reactors. The power plant’s owner, Tokyo Electric Power Company, has been struggling to bring reactor units 1, 2, and 3 under control after last week’s earthquake and tsunami caused a massive power failure that disabled the cooling systems. On top of that, the spent nuclear fuel in Unit 4, which was down for maintenance at the time of the quake, has twice ignited and appears to be the source of the high levels of radiation released so far.

The spent fuel currently presents the biggest problem. On Wednesday, NRC chairman Jaczko testified to a Senate panel that he believed that the pool of water that the spent fuel is supposed to be submersed in had completely burned off. The Japanese government has said that there still is water in the pool, however. Keeping the spent fuel covered is essential for keeping it cool and preventing the release of radiation. Not all of the rods are completely spent, and ongoing reactions within them generate heat. Without a functioning cooling system, the rods heat up the water and cause it to boil off. The smoke coming from the unit indicates that the dry rods are likely causing their zirconium coating to corrode and ignite, allowing radiation to escape.

One expert describes what is currently happening as “last-ditch efforts.” If plant workers can’t regain control over the units, there could be a meltdown.

The spent fuel pool at Unit 4 is also particularly problematic, according to the Union of Concerned Scientists, because the rods in it were just removed in December 2010 and are still highly radioactive. The Unit 4 building has been severely damaged, and the spent fuel pools don’t have the containment infrastructure that the reactors do. “There’s no protection,” says Kenneth Bergeron, a physicist who previously worked on nuclear reactor accident simulations at the Department of Energy’s Sandia National Laboratories. “These things are burning in the open air virtually…Then the fission products are just there to be lofted into the atmosphere.”

The Japan Atomic Industrial Forum has released an updated status report on all the units that shows that the water level in the spent fuel pool at Unit 3 is also critically low. Japanese officials have characterized this reactor as perhaps the most dangerous, because it uses some mixed oxide fuel, or MOX, which includes uranium and plutonium, and presents a more severe radiation threat. On Monday, there was an explosion at Unit 3 that appears to have damaged its reactor core and severely damaged its building. Responders have also been struggling to maintain the water level in its reactor, and as of Thursday evening it was only half full.

Life-threatening radiation levels have made it even harder to emergency workers to deal with the multiple problems at Fukushima. Fire engines, military trucks, and aircraft have been sent in to douse the units in hopes of cooling them down. The New York Times reports that at least one helicopter turned back, likely due to the high radiation levels.

Alvarez describes what is currently happening as “last-ditch efforts.” If plant workers can’t keep the water levels up and regain control over the reactors, there could be a full meltdown. That means the overheated nuclear fuel will melt and pour into the bottom of the reactors. The question then becomes whether the reactors’ primary containment vessels can hold the melted fuel. Some nuclear watchdog groups have concerns that the Mark 1 model reactor used at Fukushima may be vulnerable to failures. The containment vessels at Units 2 and 3 are thought to be damaged, and the building integrity is compromised at all three units. Additional fires and explosions could further damage the containment system.

What might happen next was described to the Knoxville News Sentinel by Michael Allen, who has run nuclear-accident simulations at Sandia National Labs:

If workers are unable to get additional cooling water into the reactor vessel, the molten fuel core will collapse into the water in bottom of the vessel. Eventually the heat from the decaying fuel would boil away the water that’s left, leaving the core sitting on the vessel’s lower head made of steel. Should that happen, “It’ll melt through it like butter,” Allen said.

That, in turn, would cause a “high-pressure melt injection” into the water-filled concrete cavity below the reactor. Because the concrete would likely be unheated, the reaction created by the sudden injection of the reactor’s ultra-hot content would be immense, he said.

“It’ll be like somebody dropped a bomb, and there’ll be a big cloud of very, very radioactive material above the ground,” Allen said, noting that it would contain uranium and plutonium, as well as the fission products.

In the very least, such a scenario would render the area around the Fukushima power plant uninhabitable for the foreseeable future—an area Alvarez says could possibly be as large as several northeastern states. Its wider impact would depend on where the resulting plume of radiation travels. Even then, fully understanding the accident’s environmental and public health impacts of could take years. Yet if the prevailing wind carries the radiation out to sea, there would be less impact on people living beyond the plant’s immediate vicinity. But that’s another big “if” in a situation whose final outcome remains unpredictable and potentially catastrophic.