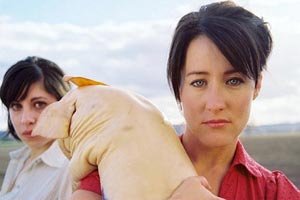 When Naomi Pomeroy started cooking professionally 12 years ago, she hardly ever ate meat. In fact, she had been a vegetarian as a teenager. “Meat just wasn’t really something that I was that interested in,” she says. “As a kid I was like, ‘Where’s the salad?'” But when her personal-chef clients demanded steak and pork chops, she learned to cook meat out of necessity. Fast forward to 2007, when she opened Beast, a six-course prix-fixe restaurant where meat is the main attraction, literally: The centerpiece of the Portland restaurant is a butcher block where Pomeroy and her sous-chef carve up supper right in front of all the guests. News about Beast has spread fast, and Pomeroy, 35, has been racking up accolades: She was the only woman among Food and Wine magazine’s best new chefs of 2009, and she was nominated for a James Beard award earlier this year. I talked to Pomeroy about environmentally conscious meat-eating, being a lady butcher, and what she’s cooking up at Beast right now.

Mother Jones: Would you tell me a little bit about Beast?

Naomi Pomeroy: Beast has been open just over three years, in Northeast Portland. It seats 24 people at two big, long tables. It’s really tiny. It’s one big room, and we have the big butcher block in the middle that’s our kitchen. It’s me and my sous-chef Mika, and we’ve been working together the whole time it’s been open, the two of us.

We serve a six-course meal every Wednesday through Saturday, and two brunch seatings on Sunday. We call our cuisine “refined French grandmother”: Very simple, kind of rustic, but with a real refined touch, the touch of a restaurant instead of staying at someone’s house. But everyone comments that it feels like a house in here. The kitchen is completely open; the only barrier between us and the diners is that butcher block. So it’s literally like we could talk to people while we’re cooking.

We change our menu every week, and we don’t do any changes or substitutions to the menu, which is something everyone always takes great interest in, why we do that. It’s not out of any kind of idealistic sense other than, just for only two human beings working in the kitchen whipping out something on the fly, we don’t have the facilities to do that. Also everyone’s eating the same thing at the same time, so it’s possible to have dialog around it and all of that.

MJ: What kind of crowd does Beast attract?

NP: We tend to get a lot of people who are so into food that they’ve either traveled here to eat here or eat food in Portland, or people that can afford it. That challenges me sometimes. I know it’s expensive for people. We don’t get a lot of young hipsters in here [laughs]. We don’t have a huge quotient of people under the age of 30.

But that’s not to say we don’t have them, because we do—the kind of people that have saved up their money to eat here. I actually really don’t think it’s expensive—$68 for the six courses, and then it’s $35 more if you get the six wine pairings. I know that it’s difficult for people to justify spending a hundred dollars on a meal, but as Americans we spend a lower percentage of our income than any developed nation on our food, and it’s really important to me to know that I can afford to buy grass-fed beef from a very small producer. It costs a lot of money to do that, and it costs a lot of money to buy wild-harvested foods.

But I’m also sad that not everyone can afford to eat here. Maybe I’m going to start some kind of a program [laughs], like an assistance program. I don’t know, or I’ll do a weekly gift certificate giveaway, or something. I don’t like not being reachable to everybody.

MJ: How did you decide on a meat-themed restaurant?

NP: The neat thing about the meat theme is that in my private life, I eat more vegetables than anything else. I was a vegetarian for a long time. I started eating meat again probably like 12 years ago, when I started personal cheffing. I figured in order to cook meat, you have to eat meat. It doesn’t look like the planet’s going to stop eating meat anytime soon—let’s be realistic about that. So maybe giving people an option of a sustainably sourced product is as good as it’s going to get. 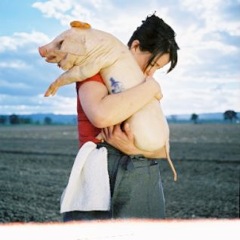 In the last month or so, I’ve only been getting whole animals, which is a totally brand new thing for me. I got a whole pig a couple weeks ago. We saved every single part of that animal. Nothing went unused. Most restaurants can’t do that, because people are coming in and demanding a pork chop, and their friend wants a beef tenderloin, and you cannot have all of those whole animals in a restaurant. So the great thing about our format is we can do that.

My goal for this year is to go to all the farms where the food I serve comes from. And then eventually I would like to create a collective of restaurants in the Portland area that can support and sustain a mobile butchery operation, so we would basically all chip in and pay for a butcher that could go to the farms and kill on sight. Because there’s so many people that are raising product that they can only sell to the public on their farms, not retail or not to restaurants because of the USDA certification process.

And then the other piece of the meat theme is that there is a level of I think marketability, irony, and interest in two young, attractive ladies taking down some hogs, you know what I mean? There’s something interesting about that juxtaposition that I’ve always really enjoyed. There aren’t that many female butchers. When people were hunting and men were bringing in rabbits, of course the women were doing that work. But it just has changed and shifted so much. I’ve certainly had men that work in the kitchen here, but we tend to hire other women to work here. That’s another aspect of what we do. It’s nice to give women an opportunity to be in the kitchen at a high level.

MJ: Is it hard to be in the male-dominated restaurant scene as a woman?

NP: Occasionally I have that little tiny voice that’s like, “Maybe you just got invited to do this butchery competition because of the fact that they needed one woman there,” or “Maybe you got the best new chef of 2009 from Food and Wine magazine because they had to have one woman on the cover.” Those kinds of things. But I also completely know that’s not true, because I’ve eaten a lot of other people’s food and I know that I’m in the running.

MJ: Have you given any thought to the food safety bill and its effect on small farmers and producers?

NP: I have given so much thought to the food safety bill, because the only reason that we even need to worry about food safety is because large companies and corporations have ruined our food supply. And the thing about whether some bacteria is present in the cheese [or not is just such a distraction. Why are people getting sick from natural foods? A lot of it has to do with the fact that we are ingesting so many antibiotics and crap that we can’t fight off these sicknesses anymore. Our bodies don’t even know how to eat natural food anymore. To pass health inspection, you have to keep your eggs on the bottom of the refrigerator with the meat so that they can’t break and crack onto anything else. Why? Because our eggs are contaminated. Because our system’s broken.

MJ: Could you tell me about some of the things that you serve, give me some examples of maybe what’s on your menu this week?

NP: We got two lambs in on Tuesday, and we broke them down. Last night, we boned out the loins and butterflied them, which just means you open them up flat. I had some bread from a local bakery that I cut down into a small piece, and put a lot of butter and thyme and salt and pepper, toasted it. Then I rolled it up in the lamb loin, seared it off, then finished it in the oven. The bread is almost like stuffing in the inside. It’s really pretty, actually, kind of like a sushi roll.

On the salad, we have the cracklings from that whole pig we got. I had had some cracklings from my friend recently, and I just had to know how he did it, because they were so perfect, and I found out that the reason they’re so perfect is that it’s tons of work. You have to take the skin off the belly and then cut it up and then cook it, boil it for quite a while, till it’s soft, and then you have to scrape all the residual fat off of it. And you have to dry it out in the oven for like 72 hours. I had to dry it really slowly because you don’t want to get any color on it. And then we fry it up, and it’s beautiful. Not that it’s good for you to eat a lot of fried pork skin, but it’s incredible to use all the parts of a pig.