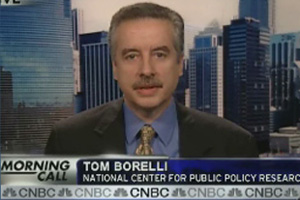 The executives of Duke Energy are used to protesters showing up at shareholder meetings. As one of the nation’s biggest greenhouse-gas emitters, the company has long been a target for enviros who demand that it stop blowing up mountains to get coal, burning the stuff, and warming the planet in the process. But the execs were befuddled last May when a man named Tom Borelli stood up at their annual shindig to demand precisely the opposite.

The company, Borelli insisted, should make a detailed accounting of the resources it has wasted lobbying for climate-change regulations—Duke CEO Jim Rogers had spent too much time trying to strike “a deal with the government devil” and “chasing legislative windmills,” he said.

Company flacks knew how to deal with lefty protesters, but Borelli and his wife, Deneen, were unfamiliar turf. “We were standing there scratching our heads,” recalls spokesman Tom Sheil. “This isn’t the way it’s supposed to be.”

Duke has indeed been a major player in the US Climate Action Partnership, a coalition of corporations and green groups put together in 2007 to build momentum for a cap-and-trade bill. It helped shape the climate-and-energy bill that passed the House last year before faltering in the Senate. And Rogers, a charismatic southerner, has acquired a rep in DC as an unexpected champion of climate policies.

Borelli, for his part, has spent the past five years as a shareholder activist, buying small quantities of stock for the explicit purpose of making a fuss at shareholders meetings, mostly over companies’ efforts to curb global warming, which he argues “isn’t out of line with normal cycles in the environment.” Other Borelli targets have included General Electric, PG&E, Dow Chemical, Caterpillar, and John Deere.

Borelli’s former role as a tobacco scientist at Phillip Morris makes him somewhat of a pioneer in the field of corporate-sponsored denial. As PM’s director of corporate scientific affairs during the 1990s, he worked to discredit studies indicating that secondhand smoke was unhealthy—a fact you won’t find in his online bio.

In 2005, with global warming gaining political currency, Borelli hooked up with Steve Milloy, a well-known climate-change denier, Fox News commentator, and founder of JunkScience.com. Together, they founded the Free Enterprise Action Fund, a mutual fund whose investments were designed to further their anti-regulatory agenda. Early on, the ExxonMobil Foundation contributed at least $70,000 to help the pair, to—in the words of their now-defunct website— “keep big businesses from becoming wholly-owned subsidiaries of Marxist-Socialism, Inc.”

Milloy moved on after a few years, leaving Borelli to carry the torch. These days, Borelli is a senior fellow at the National Center for Public Policy Research, a minor DC think tank best known for its ties to disgraced lobbyist and former board member Jack Abramoff. (NCPPR was the entity that sponsored then-House Majority Leader Tom DeLay’s infamous Scotland golf junket in 2000.) Borelli won’t say who pays his substantial travel bills—only that his work is funded by individual donations from “libertarians, free-market conservatives.”

Which is odd, since the corporations arguing for cap-and-trade aren’t doing it to be good citizens. They simply believe they have a better chance of gaming Congress than they do of gaming the Environmental Protection Agency, which now has the authority to regulate CO2 as an air pollutant. Some companies even stand to profit from caps on carbon emissions: GE, for one, brought in $18 billion in revenue last year from clean energy and efficiency technologies. “Mr. Borelli, as a shareowner, is welcome to attend our shareowner meetings,” notes company spokesman Peter O’Toole. “But these kinds of proposals are not of interest to nearly all GE shareowners.”

It might seem contradictory for a free-enterprise crusader to protest policies that companies have deemed in their business interest, but Borelli says he doesn’t consider it free enterprise when a company creates demand by pushing climate-change laws. In any case, he aims to “make the CEO feel uncomfortable.”

True enough. The tactic first emerged in 1971, when the Episcopal Church bought up shares to shame companies that were doing business with South Africa—part of a larger pressure campaign that convinced corporate America to divest from the apartheid regime. This success inspired pension funds and others to apply their shareholder clout, pushing for firms to do the right thing on a host of issues—AIDS, tobacco, climate change.

The Interfaith Center on Corporate Responsibility, a coalition of religious interests, has filed at least 282 activist resolutions this year, many aimed at curbing emissions. So it’s no surprise that its reps have run into Borelli at shareholder meetings. “He used the tool we had against what we were doing,” says Sister Pat Daly, an ICCR climate leader who has taken on the likes of Ford, GM, GE, and ExxonMobil.

But where the ICCR garners respect from many executives, Borelli’s targets dismiss him as a pest. At a 2006 Goldman Sachs meeting, one of his co-presenters, Peter Flaherty, leaped over a security barrier to take control of then-CEO Henry Paulson’s microphone and chastise him for his “environmental activism.” The meeting’s Q&A period, according to the Free Enterprise Action Fund’s website, “was dominated by Borelli’s extended colloquy with Paulson about the Chilean land deal and Nature Conservancy chairmanship.”

All the drama hasn’t amounted to much. GE shareholders, for instance, have repeatedly slapped down Borelli’s proposals. Only 7 percent supported his 2006 bid to make the company produce a “global warming report.” He fared slightly worse the next year. By 2008, support for his proposal had dropped below 4 percent.

Given Borelli’s record of failure as a shareholder activist, he would seem to be little more than a harmless curiosity. But Kert Davies, a Greenpeace research director and head of the ExxonSecrets campaign, which documents the funding of climate-change denial by corporations, isn’t so ready to laugh him off. “Borelli represents a class of corporate influence peddlers who make a living causing damage to our society, delaying action on important health issues like smoking and global warming,” he insists. “In fact, they kill people: Lives are lost as a result of their actions, and some day they will be held accountable.”

Now if only Tom Borelli could buy shares in Greenpeace.