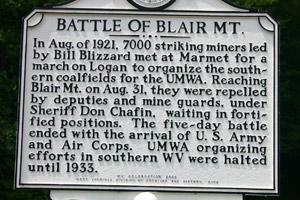 It’s largely absent from history books, but for labor scholars the 1921 battle at Blair Mountain is legendary. Years of struggle between miners and coal-company bosses came to a head at this ridge in southern West Virginia, as an army of more than 7,500 miners marched miles to face off against coal-company guards, hired security forces, and local sheriffs. The five-day skirmish was the largest labor uprising in US history, and it is seen as a turning point—a crack in the armor of King Coal.

Now, almost 90 years later, there’s another fight over Blair Mountain, featuring a new generation of activists and several modern-day coal companies intent on bulldozing and blasting away at a historical site to access the veins of coal beneath.

The original battle came a little over a year after a bloody face-off between miners and operators in Matewan, West Virginia, and just weeks after the town’s union-supporting police chief, Sid Hatfield, was shot to death. Miners from across the southern part of the state answered a call from United Mine Workers of America leaders to advance on Logan County, looking to gather support in the coalfields as they marched. Blair Mountain stood as a fault line between the part of the state under control of the coal industry and the unionized areas to the north.

Our namesake, the legendary labor leader Mary Harris “Mother” Jones, played a role in the fight, as well. Years before, she’d warned the governor that there would be “one hell of a lot of bloodletting in these hills” if the coal companies’ hired guards didn’t end their campaign of violence against organizers. But in the days before, Jones discouraged the miners from marching, at one point claiming to have a telegram from President Warren G. Harding urging them not to fight. (Historians believe the telegram was actually a fake).

But the miners weren’t deterred, says Gordon Simmons of the West Virginia Labor History Association. Their plan, he says, was to “overthrow the rule of company domination” in southern West Virginia—to establish the right to organize and fight for safer working conditions in the mines—and to use force if they had to.

Miners began arriving at the mountain one morning in late August (there are varying accounts about the actual date). Though the miners were greater in number, the better-armed coal-company forces overpowered them from the ridge above. The companies reportedly hired private planes to drop homemade bombs on the miners, and by September 5, federal troops that the governor called in for backup began arriving. After five days of open warfare and dozens of lost lives, the miners gave up; they had little interest in fighting against the federal forces that many had recently fought with in World War 1. Most headed home, but hundreds were charged with insurrection, and dozens more with treason and murder.

Only years later, with the passage of the National Labor Relations Act in 1935, would the miners win the rights to unionize that they fought for at Blair Mountain. But that battle set the stage. “It’s probably the most significant single event in American labor history, in terms of quantity of people involved, the event, the historical significance,” says Simmons.

After more than a decade of working to get the 1,600 acre site listed in the National Register of Historic Places, it was finally recognized in March 2009—only to have that listing taken away several months later. Now, several groups are suing the Department of Interior to get the site relisted—a move they say is necessary to keep history from going up in smoke.

Kenny King, a resident and amateur archeologist, has been combing the battle site for nearly two decades with a metal detector, searching for artifacts. His grandfather, a miner, fought in the battle. Over the years, King has found shell casings, buttons, a whistle, a belt buckle, and three guns. “People were just so fed up with their conditions, the way they were being treated, they felt they had to do something,” he says. “They had no other choice, they had to settle it themselves. That ought to be worth something. It’s part of our history.”

But in the months since it was delisted, coal companies like Massey Energy Company and Arch Coal have crept closer to the site. Four landholding companies currently own portions of the land that advocates want set aside for historical protection. Locals say their mining blast sites come right up to the boundary of the 1,600 acre plot already, and worry that the two companies could start clearing the way to mine on the battlefield in the coming months. Last time he went there searching for artifacts, King found two armed security guards on all-terrain vehicles blocking the road.

The site had barely received historical status when the listing started to unravel. West Virginia’s State Historic Preservation Office (SHPO), which had originally nominated the site, informed the National Park Service in April 2009 that it believed there was an error in the application, and objections from landowners had been “unintentionally overlooked.” The SHPO’s move came after lawyers working for the coal companies in the area produced its own list of landowners who objected to the listing—after the deadline for comment had passed. As a result, the keeper of the National Register of Historic Places removed the site from the list on December 30, 2009.

Listing advocates say that in addition arriving too late, the new list was full of errors—including the names of people who were dead and those who weren’t actually the rightful landowners, says Harvard Ayers, an archeology professor at Appalachian State University and a member of Friends of Blair Mountain. They accused the coal companies of drumming up the list in order to prevent the site from being protected. “They’d like to get rid of the history and they’d like to take the millions of dollars of coal out of there as cheaply as possible,” says Regina Hendrix, a board member of the Ohio Valley Environmental Coalition and a volunteer with the Sierra Club.

Now the state is “in the process of doing research for the renomination of Blair Mountain,” says Jacqueline Proctor, deputy commissioner of West Virginia’s Division of Culture and History. The office has retained a lawyer to conduct yet another property owner search and survey, though the office declined to offer a timeline for a new decision.

“Everybody recognizes this is a historic resource, but by virtue of that property ownership part of the equation it can’t get listed yet,” says Susan Pierce, Deputy State Historic Preservation Officer.

In 2006, the National Trust for Historic Preservation listed Blair Mountain as one of the “most endangered” historical sites in the country. The nonprofit joined with Sierra Club and other groups in a letter asking the National Park Service to reconsider its delisting in July, but were denied.

Advocates for protecting the site like Ayers and Hendrix worry that time is growing short for the mountain. Sierra Club, the Ohio Valley Environmental Coalition, Friends of Blair Mountain, and the West Virginia Labor History Association filed suit against the Department of Interior in September, arguing that the Park Service’s decision to delist was “erroneous” and that proper protocols were not followed. Paul Loether, chief of the National Register of Historic Places, told Mother Jones via email that the ball is back in the West Virginia SHPO’s court to formally re-nominate the site. Once they do, he said, “We will process as expeditiously as possible.”

Advocates worry that in the meantime, coal companies could simply buy up more property nearby while the new search for landowners is underway, or they could start work on their portions of the land, like clearing trees and brush, which could compromise its historical integrity. “I think it’s in dire danger,” says Hendrix. While she says she’d be supportive of underground mining to access the coal seams in the mountain, the companies are looking to surface-mine the site, a process that requires clearing trees and topsoil before blasting through rock layers with explosives. That kind of mining would inevitably destroy the mountain.

And if the mountain goes, so does the history it has witnessed. “It’s difficult enough to discuss labor history in this country,” says Phil Smith, communications director for the United Mine Workers of America, which has also encouraged the National Park Service to reconsider the listing. “When the places where labor history occurred are wiped off the map, it becomes even more difficult to talk about them.”

And to have coal companies like Massey and Arch mining there adds insult to injury, says labor historian Simmons. “It is sacred ground. People were killed in order to have basic rights of unionization,” he says. “The idea that they’re going to blow that mountain up to extract some coal for profits by non-union operations is really a horrendous irony.”